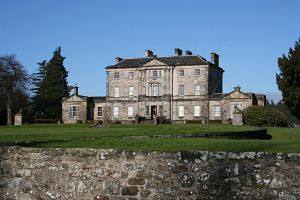 Newliston is a late 18th-century Robert Adam house featuring a formal garden with water features modelled on Versailles. A miniature steam railway runs through the grounds.

Newliston is one of the last country houses built by Robert Adam before his death in 1792 and is set in a designed 18th-century landscape featuring colourful azaleas and rhododendrons.

The history of Newliston goes back to the late 15th century, when Duncan Dundas, Lord Lyon King of Arms, purchased the Newliston estate. The property passed down through the Dundas line until Elizabeth Dundas married John Dalrymple, the 1st Earl of Stair. The Earl is best known for his role in the Glencoe Massacre of 1692, which resulted in him being dismissed as Secretary of State.

The 2nd Earl served as ambassador to the French court, where he was inspired by the formal gardens of Versailles. On his return to Scotland, the Earl called on architect William Adam to draw up plans for a new mansion set in ornate gardens in the French style, with formal avenues, and water features such as canals and cascades.

Adam's mansion was never built, and it seems likely that much of the garden layout was by Lord Stair himself. It took 22 years to lay out the gardens, with a workforce of 200 men, possibly including members of the Scots Greys stationed at Newliston as a bodyguard for Lord Stair.

Part of the garden layout is a Union Jack design, said to commemorate Lord Stair's role in the Battle of Dettingen in 1743.

When Lord Stair died the house was sold to a London merchant named Robert Hog. In a curious twist, Hog hired Robert Adam, son of William, to design a mansion in keeping with the formal gardens. Newliston was one of Adam's last commissions in a long and influential career as Britain's foremost country house architect. The central block designed by Adam was extended in 1845 with a pair of wings designed by David Bryce.

The house is owned by Robert Hog's descendants and is open to the public in summer. In the grounds is an early 18th-century doocot, now converted into a private dwelling. The doocot has been described as 'the most commodious dovecot in Scotland'. 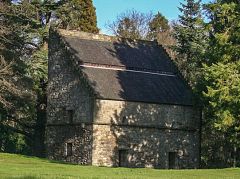 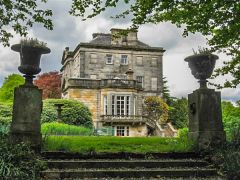 More self catering near Newliston >>

More bed and breakfasts near Newliston >>