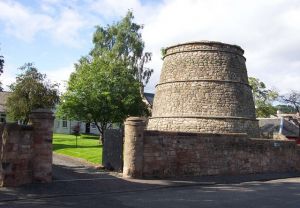 Corstorphine Dovecot
Seeming strangely out of place amid modern housing stands this 16th-century beehive-shaped dovecot that once served long-vanished Corstorphine Castle. The dovecot is in a very good state of preservation, with nesting boxes still complete and well-used by local pigeons.

The base of the dovecot is almost 89 feet in diameter, with walls almost 4 feet thick. Each course of the wall is stepped, or recessed slightly, above the previous course, creating the distinctive beehive profile common to many dovecots of this period in Scotland.

There are 28 tiers of stone nests inside, totalling space for 1060 nests. Access for the birds is by way of 6 holes in the south wall. Dovecots were an important feature on many Scottish estates.

They helped provide a steady diet of eggs and meat throughout the year, and the dovecots were often distinctive and used as very visible status symbols. Pigeon dung could also be used as agricultural manure and was used in the manufacture of gunpowder.

We do not know exactly when the dovecot was built but it was likely in the early 1500s.

The main access road to Corstorphine Castle passed close to the dovecot site. The castle was built in 1390 by the Forrester family on the present Castle Avenue and was used until the 18th century. It was ruinous by the late 19th century, and no trace now remains.

More self catering near Corstorphine Dovecot >> 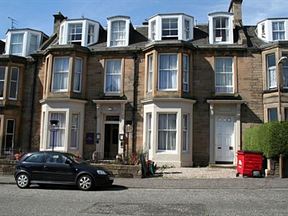