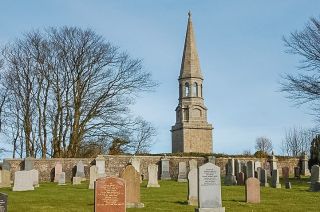 Culsh Memorial is a prominent local landmark; an 80-foot-high tower of granite built to commemorate local MP William Fordyce, who helped improve the lot of his tenants and the rural working classes.

William Dingwall Fordyce (1836-1875) of Brucklay was a Liberal MP and the first MP for Aberdeenshire. Much of his political life was spent improving the lot of workers on his estates. He is credited with setting up insurance for worker's cottages, introducing a weekly carriage service from New Deer to Banff, Peterhead, and Aberdeen, to improve mobility for the working classes. He also successfully lobbied for the Buchan Railway to be extended beyond Ellon. He managed to get changes to gaming laws introduced that helped boost the rural economy.

In 1876 his grateful tenants erected a monument to Fordyce atop Culsh Hill, paid for by subscription.

During construction of the monument, the remains of a prehistoric stone circle were found on the hilltop. Stones from the circle were used to build New Deer Manse. The tower stands 80 feet high and was designed by architect James Matthews. The tower is topped by a slender spire that looks very much like a church steeple. From a distance, it is easy to think that a kirk stands beside the burial ground in New Deer, but it is, in fact, the Memorial that rises over the cemetery.

There is a viewing platform at the top of the monument, reached by a spiral stair rising within the tower, and another at the base. On a clear day the views are panoramic, with the Grampian Mountains looming in the distance to the south and the Caithness Hills to the north.

The monument stands directly behind the graveyard and is easily accessible. 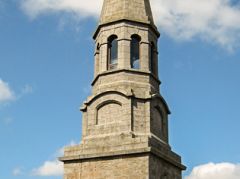 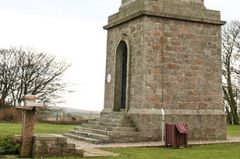 More self catering near Culsh Memorial >> 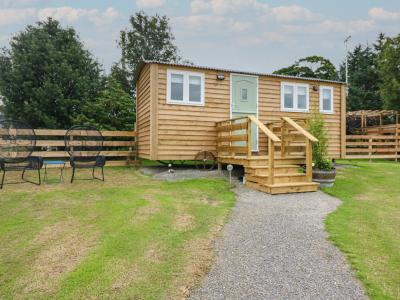 This pretty shepherd's hut rests in New Deer, Aberdeenshire and can sleep two people in one bedroom.
Sleeps 2