HERITAGE HIGHLIGHTS:   Does the kirk stand on a 6th century monastery? 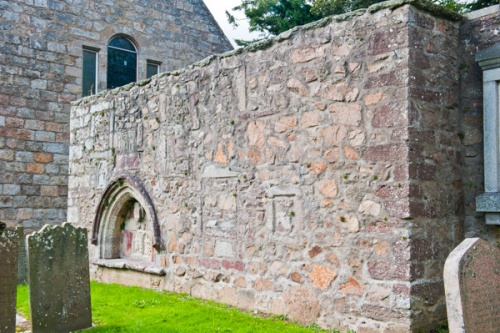 Just to clear up any confusion - the name of the village is Old Deer, and there are two churches; one late 18th century, and one, obviously older, hence 'Old Deer Old Kirk'. The Old Church is not immediately obvious, but if you enter the churchyard and walk around to the rear of the current church, the roofless ruin of the Old Church will come into view.

History of the Old Kirk

The Old Kirk probably dates to the 15th century, but its roots go back much further in the mists of time. Traditional scholarship suggests that the kirk was established on the site of a Culdee settlement established by St Columba and St Drostan around AD 580.

That early foundation later became Deer Abbey, the ruins of which are located about half a mile away, on the banks of South Ugie Water. The church apparently belonged to the abbey from 1219, when the abbey was founded. The first written record, however, comes from 1256, when 20 marks from the church were granted to Aberdeen Cathedral as a prebend.

The cathedral maintained the kirk, assigned a parish chaplain, and received revenues from the vicarage and parsonage. Local tradition suggests a dedication to St Drostan, but there appears to be no historical evidence to support this dedication.

The Old Kirk is a simple building, composed of only a nave and chancel, separated by the original medieval chancel arch. Though the roof is gone, the walls are still standing to their full height, though the east end of the nave has been truncated.

The west end of the nave was removed to make way for the new parish church in 1798. There are a pair of medieval windows facing each other across the narrow nave, and a medieval piscina beneath a trefoil arch is set into the wall beneath the south window. A similar piscina is to the right of the chancel arch, and an aumbry cupboard is near the north window. 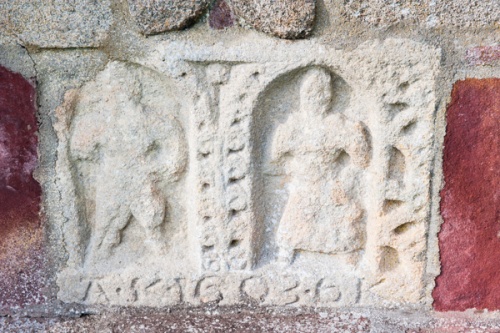 In 1892 William Ferguson of Kinmundy built a monument to his forebears against the south wall of the nave. The earliest Ferguson mentioned is James, who died in 1777. The chancel was turned into a burial enclosure around 1731 when James Ferguson of Pitfour built a marble monument to the memory of his wife Anne Stuart against the south wall. There is a smaller heraldic carved stone set in the east wall.

So much for the interior, but the most interesting feature of the church is not within it, but set into the outer south wall, where you will see several intriguing carved stones, some set within an old pointed arch. These carvings are much worn, but are obviously of great age, and are probably assembled here from a number of other places.

There is a 17th century memorial with a tomb chest, and a stone carved with figures of a male and female, with the initials AK and GK and the date 1603. A worn Latin inscription over the arch suggests that these are Andrew and Gillian Keith. 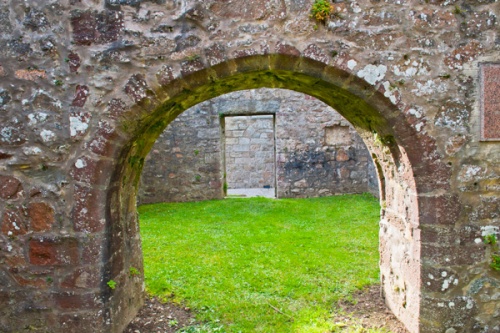 I mentioned earlier the tradition that the Old Kirk was founded on a monastic settlement established by St Columba and St Drostan in the 6th century. That view has been disputed, but a geophysical survey of the site in 2010 found evidence of a previously undiscovered grave and an 'anomaly' beneath the chancel, which suggests the possibility of an early monastic settlement on the Old Kirk site.

We are on much firmer grounds when it comes to the Book of Deer; this illuminated manuscript was created at Deer Abbey and contains the oldest known written record of Scots Gaelic. A plaque on the side of the current 'new' church commemorates the Book of Deer.

I have a confession to make; I actually stopped by the church in Old Deer because I had read somewhere that there might be a carved Pictish stone there. I searched around the churchyard and didn't see anything that looked carved, though there was a very large boulder just inside the churchyard wall.

The vicar came by as I was engaged in this fruitless pursuit, and he didn't know anything about a carved stone either. However, in the course of my search for the stone, I poked my nose behind the church and came face to face (or should that be face to wall?) with the Old Kirk.

I was intrigued by the old monuments and the obvious medieval stonework, so took photos of everything and determined to learn more about the roofless old building when I could.

I'm more intrigued now; I wish I'd read the connection between the Old Kirk and the abbey before I visited! The church is certainly a simple building, and the remains are not extensive, but the monuments are intriguing, and the association with 6th-century saints makes it all the more appealing! 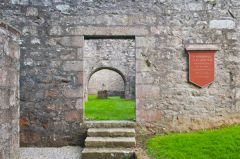 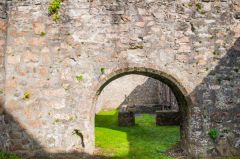 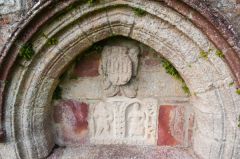 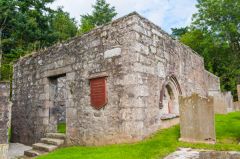 About Old Deer Old Kirk
Address: Abbey Street, Old Deer, Grampian, Scotland, AB42 5LN
Attraction Type: Historic Church
Location: At the crossroads of the B9029 and B9030 in the centre of Old Deer, which is west of Mintlaw.
Location map
OS: NJ978476
Photo Credit: David Ross and Britain Express

Self Catering near Old Deer