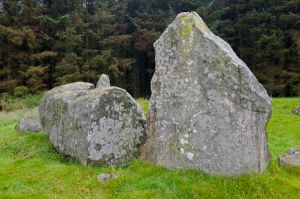 A stone circle in a lovely location overlooking the village of Old Deer. The circle is composed of nine stones and one recumbent stone, making a circle of just over 14 metres in diameter. There was apparently one more upright stone but this has now disappeared.

The stone circle at Aikey Brae is similar to several others in the Buchan region, composed of stone erected on a wide circular bank of earth. The bank is built up, using a mix of earth and small stones. At the base of the bank there are small kerb stones on both the inner and outer edges.

The site was excavated during the 19th century, but unfortunately, the rather slapdash nature of the excavation disturbed any archaeological evidence and makes it harder to interpret the site. From looking at other similar circles in Aberdeenshire we can guess that there were cremation burials within the circle and a possible burial cairn.

Recent investigation also concluded that the ring bank was built before the stones were erected, suggesting that local beliefs and practices changed over time, and what we see today is the result of several different phases.

The largest stone is recumbent, with flankers on either side. The huge recumbent stone weighs over 21 tonnes, and is of Whinstone, while all but one flanker are of local granite. It seems clear that the stones were arranged according to height, with the flankers being the tallest and the shortest stones opposite the recumbent stone.

It is possible that they were arranged to determine the major and minor standstill points of the moon, which occur every 18.6 years. That would suggest that the recumbent circle at Aikey Brae helped the local inhabitants track the passage of the seasons, something that would have been very useful for people who depended upon agriculture.

The circle is signposted off the A950 and B9029, near Deer Abbey, and at the bottom of the farm track leading to the hill. You have to park at the bottom of the farm track and walk up the hill to a forestry plantation where there is an informational sign. From there, access to the circle itself is through the plantation and is actually rather confusing.

Rather than signposts, the path is laid out with stones on the forest floor. Maybe it's just me, but I lost my way several times and had to retrace my steps. Thankfully, the plantation is not that large and you can't get permanently lost!

There are plenty of other historic sites in the area, including Deer Abbey, Cairness House, and Memsie Cairn. 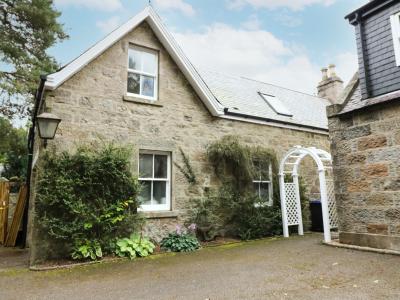 This split-level cottage is situated in Old Deer, Aberdeenshire and can sleep four people in two bedrooms.
Sleeps 4