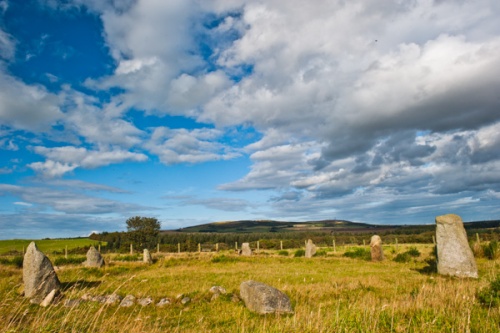 Strichen stone circle is a very well preserved recumbent circle, a type found almost exclusively in the Grampian area. The circle is about 85 metres diameter, and follows the usual recumbent pattern, with a large horizontal recumbent stone in the south-west of the circle, flanked by large upright stones.

Around the circumference of the circle, the upright stones are graded in size, diminishing so that the smallest stone is directly opposite the recumbent stone. All the stones are set upon a low bank of earth and rubble.

Within the bank, to the north east of the recumbent stone, were found the cremated remains of a woman. On the northern side of the central ring was a small pit, lined with stones, and in the pit were several hammer stones and rubbing stones, with a cup and ring marked stone.

Dr Johnson records a visit to Strichen in 1773 (he calls it a 'druidical circle', as almost anything ancient was attributed to druids at that time). He was unimpressed, however, and considered nearby trees 'of full growth' more worthy of note. Since Dr Johnson's visit, Strichen has seen some peculiar happenings, and actually been moved twice, something you can't say about most stone circles! 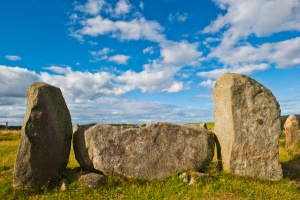 Sometime around 1800, a tenant farmer pulled down the stones, but the landowner forced him to re-erect them. However, he did so in a new location south of the original site. He also took no care as to the placement of the stones, so that the recumbent stone was placed on the northern arc of the circle.

In 1965 the recreated circle was dismantled, and the site bulldozed. From 1979-83 a careful excavation of the site took place, and the stones were finally re-erected in their original positions.

The stone circle is signposted with a brown sign from the south side of the bridge at the southern edge of Strichen. Follow the minor road for several hundred yards, until you see a second brown sign. There is just room for a couple of cars to park on the verge without obstructing a driveway.

Now you need some luck, as it isn't immediately obvious where the brown sign intends you to go! I was headed the wrong way, along the stream back towards Strichen, but luckily I met a couple of locals who soon set me straight.

You need to pass under the old railroad arch, over a stone footbridge, and follow the path uphill 700 metres. You'll climb over 2 stiles, then turn left up to the crest of the hill, where you'll find the circle within a fenced area. Rather incongruously there is a picnic table within the fenced enclosure, beside the circle, but there is no information panel to explain about the site. 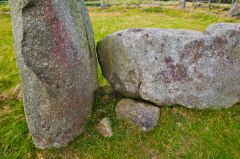 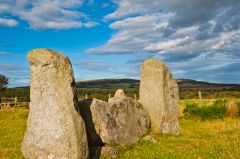