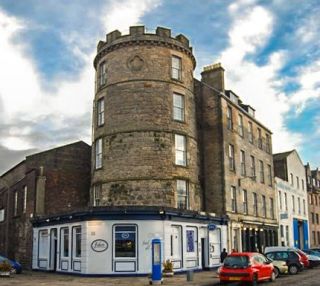 Mylne's Mill is a 17th-century folly perched on the top of a restaurant near the historic harbour. The Mill is one of the oldest buildings in Leith. It was erected in 1686 as a windmill, then became a signal tower in the 1800's.
History
In 1677 Robert Mylne of Balfargie, the royal Master Mason, received a grant of what was then waste land at the mouth of Leith harbour. Mylne proceeded to erect a tenement. The first resident of the tenement was Robert's son William, who broke from family tradition and called himself an architect rather than a master mason.

In 1685 Robert Mylne erected a seawall to help protect the harbour and timber stores on shore and built a windmill beside his tenement. The original mill was much taller and was topped by a two-storey timber structure. It stood 50 feet high and was circular in plan.

The stone battlements that make the Mill look like a castellated tower were added during the Napoleonic Wars, when the Mill was converted for use as a signal tower for relaying flag messages to ships entering the harbour, letting them know the depth of the harbour bar. For that reason, it is sometimes known as the Leith Signal Tower. It later became part of the Cran factory and in more recent times the top floors have been used as residences.

Only the exterior of the Mill can be viewed.

More self catering near Mylne's Mill >>