HERITAGE HIGHLIGHTS:   Set in a group of historic 16th/18th-century buildings 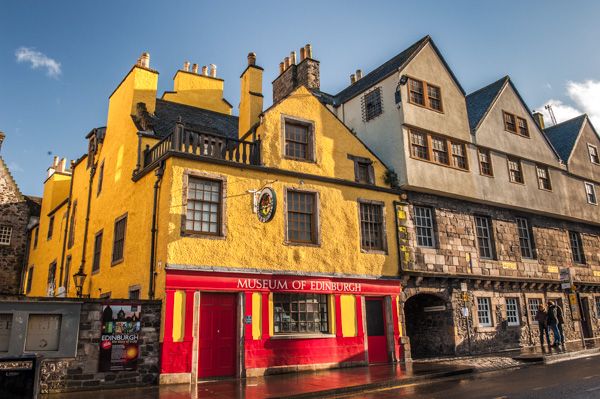 The Museum of Edinburgh tells the story of 'Auld Reekie' and is set in one of the most historic buildings on Edinburgh's famed Royal Mile. The museum is located on Canongate, at the eastern end of the Royal Mile. It is not really one building but an amalgamation of several 16-18th century buildings clustered around Bakehouse Close, a small alley with no exit. The historic complex of buildings is noticeable for a series of Latin inscriptions on the facade facing onto Canongate.

The oldest inscription is probably 'HODIE MIHI CRAS TIBI CVR IGITVR CVRAS (Today to me, tomorrow to thee; why therefore takest thou thought), written in 1570.

It is astonishing to realise that this small set of buildings was subdivided by interior walls to form a tenement with space for 323 tenants in 1851. 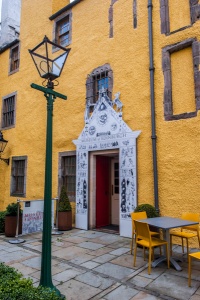 The museum entrance on
Bakehouse Close

One part of the museum is housed in Huntly House, so named because the Gordon family, owners of Huntly Castle, once lived there. On of the aristocratic Huntly inhabitants was the Dowager Duchess of Gordon, who lived here from 1738 when her son inherited the family seat in Huntly itself.

One part of your journey into Edinburgh's past is an audio-visual presentation called Foundations, where you literally watch the city grow beneath your feet in a special theatre space.

The real highlight of the museum is its collection of historic objects gleaned from Edinburgh history, with a special emphasis on the decorative arts. I mentioned silverware, much of it made right here in Canongate. Then there are collections of Scottish very early porcelain and pottery, longcase clocks, and glassware.

See the original plans for the elegant Georgian development of New Town, and a historic sedan chair, the equivalent of a manual taxi service. Then there is one of the most important documents in Scottish history; the National Covenant. 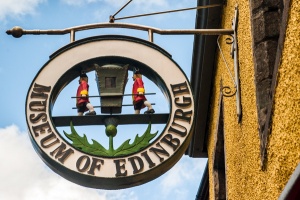 There is a collection of archaeological finds from prehistoric, Roman, and the post-medieval period. Learn about Edinburgh at Work, and see how biscuits, books, and beer were made. A nostalgic 'At Home in Edinburgh' collection includes objects that our grandparents, and even our parents might have used in their daily lives.

A collection called Private Lives and Personalities looks at some famous and infamous figures in Edinburgh's history, including Deacon Brodie, who lived a double life as a respected furniture maker and a notorious thief. Then there are Burke and Hare, bodysnatchers who killed 17 people so they could sell the bodies to medical students for dissection.

If Burke and Hare make you shiver, perhaps a look at the story of Greyfriars Bobby will settle your nerves. The famous Skye terrier stayed by his masters grave in Greyfriars Kirkyard for 14 years, refusing to abandon his dead owner. The loyal dog's collar and bowl are on display and are one of the museum's most popular exhibits.

The Museum of Edinburgh is a delight, a must-see stop on one of the most famous and historically important streets in Britain.

Nearest Accommodation to Museum of Edinburgh:

More self catering near Museum of Edinburgh

More Hotels near Museum of Edinburgh

More bed and breakfasts near Museum of Edinburgh