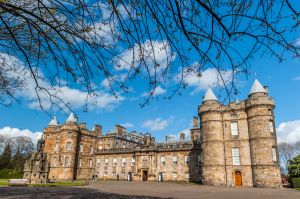 The monarch's official residence in Scotland, often known as Holyrood Palace, stands in beautiful grounds beneath Arthur's Seat. See the historic tower apartments of Mary, Queen of Scots, where her secretary, David Rizzio, was murdered. The lavish State Apartments feature decorative plasterwork ceilings, elaborately carved woodwork, tapestries and paintings. The Queen's Gallery displays works of art from the Royal Collection. Beside the Palace are the ruins of Holyrood Abbey.

Holyrood began not as a royal palace, but as an abbey, and the abbey ruins form part of the Palace grounds. According to tradition, David I founded a monastery for the Augustinian order in 1128. The name 'Holyrood' comes from 'holy rood' or 'holy cross'. Holyroodhouse was the name given to a guest house maintained by the Abbot of Holyrood. In 1501 James IV began to build a new residence beside the abbey for himself and his new queen, Margaret Tudor.

James V extended the residence with a huge tower in 1528 and created a new west facade from 1535. The renovations made Holyroodhouse much more a palatial residence than a fortified house. James' second wife, Mary of Guise, was crowned in the abbey, but it was the couple's daughter, Mary, Queen of Scots, whose name is most heavily linked to Holyroodhouse.

Mary came to live here after her return from France, and it was here that she married her second and third husbands. It was also at Holyroodhouse that she witnessed the murder of her secretary in one of the most violent events of her short reign. 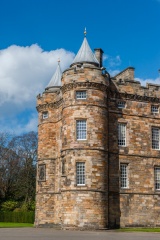 Holyroodhouse was damaged during the Civil War when Oliver Cromwell's soldiers occupied the building. A fire, whether deliberate or accidental, caused major damage. The Palace was rebuilt in 1671 after the Restoration of Charles II to the throne, and it is this 17th-century building we see today.

The man responsible was Sir William Bruce, who designed a tower to match James V's tower and create a symmetrical facade. He also created the suite of Royal Apartments, with their ornate plasterwork ceilings, and laid out the quadrangle which lies at the heart of the Palace.

Charles II never saw the Palace he had commissioned; he handed it over to his brother, James, Duke of York. James fled the country after William and Mary came to the throne, and Holyroodhouse was allowed to lapse into decay.

Bonnie Prince Charlie held court at Holyroodhouse during his 1745 bid for the throne. The Duke of Cumberland, who defeated Charlie at the pivotal Battle of Culloden, also stayed at Holyroodhouse.

It was not until George IV made his much-publicised state visit to Scotland in 1822 that efforts were made to restore the Palace interiors, but the real change came when Queen Victoria decided to use Holyroodhouse as a royal residence once more.

At the entrance to the Palace grounds, opposite the Scottish Parliament building, stands the Queen's Gallery. Here visitors can see highlights of the royal collection of paintings.

A suite of state rooms, each more elegant than the last, lead to the state bedchamber, where only the most favoured and high-ranking visitors would be allowed. Perhaps the most impressive room is the Great Gallery, hung with 89 paintings by Jacob de Wet, depicting real and imaginary kings of Scotland. 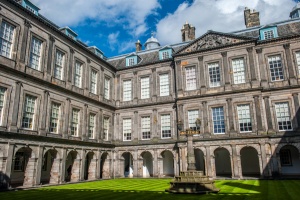 The best-known feature of the Palace is the suite of rooms used by Mary, Queen of Scots, when she lived here. These rooms were the first to be opened to visitors, in the Victorian period, and are maintained as they would have looked during Mary's lifetime.

It was in this suite of rooms that Lord Darnley, Mary's second husband, led a group of supporters to seize and murder Mary's secretary, David Rizzio.

Darnley and his men burst in upon Mary and her retinue while they were dining. Rizzio clutched at Mary's skirts, but they tore him away, carried him to a nearby chamber, and stabbed him to death. The room where Rizzio was seized, and the bedchamber beside it, are maintained to evoke the terrible event.

I found the Palace a delight to visit. There were far smaller crowds than at Edinburgh Castle, making it a more relaxing experience. You can pick up a complimentary audio tour at the entrance, and I'd recommend taking it; the audio adds a great deal of fascinating historical detail that isn't covered in the information panels along the visitor route.

The visitor route follows the course traditionally taken by visitors who gained a royal audience, moving through a series of increasingly ornate chambers before arriving at the innermost sanctum, the royal bedchamber. I found this room intriguing, for, as the audio guide points out, the monarch did not actually sleep in the ornate bed in this chamber; it was purely for show.

The other major part of the visitor experience is the Mary, Queen of Scots Chambers. These are very atmospheric and have a quite different ambience to the more ornate State Apartments. The small room where Mary was dining when her husband's men rushed in to seize Rizzio is maintained as it might have looked at the time, and the chilling story is very well told on the audio guide.

The final room of Mary's Chambers is given over to objects associated with Mary and with other monarchs connected to the Palace. Many of these historic objects, including miniatures, gifts, and jewellery, have small, hand-lettered placards that look as though they were created decades, if not centuries, ago!

When you leave the Mary, Queen of Scots Chambers you have the option of exploring the ruins of Holyrood Abbey, immediately beside the Palace. It is well worth taking the time to view the Abbey' There are a wealth of historic tombs lining the walls of the Abbey church, and a rather subdued royal burial vault at one end of the ruins.

The visitor tour ends with a stroll through the Palace gardens, which offer wonderful views to Arthur's Seat and Holyrood Park. You can also see the foundations of monastic buildings behind the Palace.

One thing I didn't see when I visited was the resident ghost. According to legend, a woman named Agnes Sampson was executed for witchcraft here n 1591, and her naked spirit still wanders the Palace and grounds. 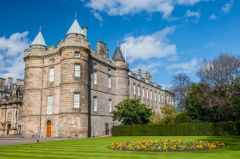 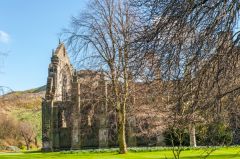 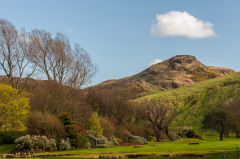 Nearest Accommodation to Palace of Holyroodhouse:

More self catering near Palace of Holyroodhouse >>

More Hotels near Palace of Holyroodhouse >>

More bed and breakfasts near Palace of Holyroodhouse >> 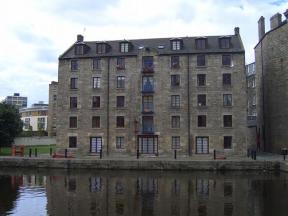 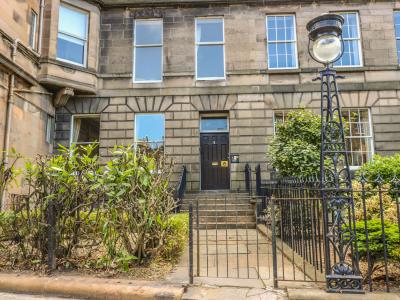 A ground floor flat in the Scottish city of Edinburgh, sleeping two people in one bedroom.
Sleeps 2