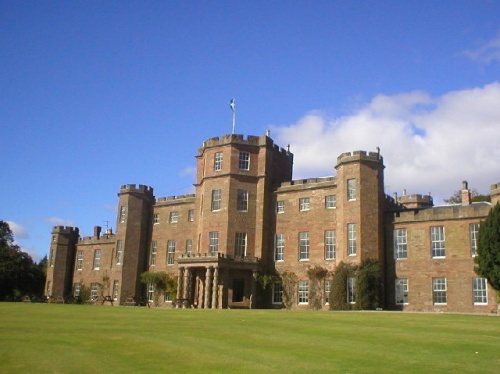 Fasque
The golden-stone mansion of Fasque creates a romantic vista, with castellated turrets and an imposing entrance porch. The house was built in 1809 by Alexander Ramsey of Balmain to replace an earlier house on the same site.
The original house, sometimes called Faskie, stood roughly 50 yards north of the current building. Architect William Adam drew up plans for a new house, but the design was never implemented.

Building began in 1809 and took 3 years to complete, at a cost of 30,000 pounds. The Ramsey's eventually sold Fasque due to rising costs of upkeep.

The house fell into disuse. Furniture was covered with sheets, and the house kept locked for decades, though the estate itself continued to function. In 1978 Peter Gladstone, a naturalist by profession, restored the old family home.

The house is very much a Victorian "upstairs, downstairs" home with a kitchen, laundry, bakery and buttery below stairs. The most interesting feature is a double cantilevered staircase, and there is a suite of state rooms including a magnificent drawing room, library, and bedrooms with Georgian and Regency furniture. There is also an exhibition of Gladstone memorabilia.

The house is presently a hotel owned by a private company. There are a few open days during the year for the public to visit. Book your tickets in advance.

More self catering near Fasque >>

More bed and breakfasts near Fasque >>