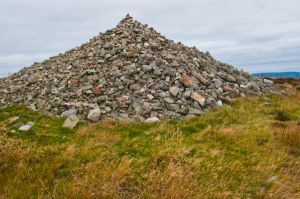 The name Cairn O' Mount is given to both a prehistoric cairn and the hill it stands on. The cairn is located at the summit of the hill, on an ancient route from Banchory to Fettercairn and the Angus glens. That route is now the path taken by the B974.

The cairn has been quite obviously altered over time, and now sports a pointed pile of stone on top that makes it resemble a wizard's hat.

Cairn O' Mount is about 47 feet diameter and 11 feet high. There are marvellous views from the summit (of the pass), and a wide layby on the western side of the road where you can park. A curious custom has arisen of leaving flowers on the cairn. I noticed several floral bouquets among the rocks on my last visit.

The cairn is immediately beside the layby at the summit. There is a second signposted parking area a few hundred yards down the hill in the direction of Fettercairn, so don't accidentally stop at that parking area and wonder where the cairn is!

The Cairn O' Mount (or Mounth as it is sometimes spelled) pass is frequently closed by snow in the winter months. If you try to reach the pass by way of Drumochty Glen, beware that the road ford at the southern end of the pass, where the Drumochty road tries to join the B974, can be impassable if heavy rains swell the current.

The route now used by the B974 is roughly that of a military road built by General Wade is his prolific efforts to improve transport in the Highlands following the 1745 Jacobite Rebellion. It is the same route followed by the Roman general Julius Agricola some 1700 years previously. 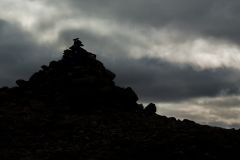 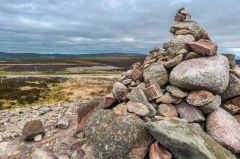 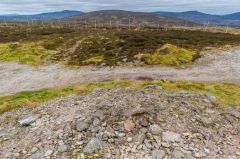 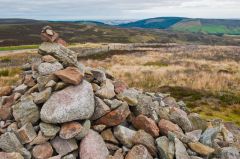 About Cairn O'Mount
Address: Fettercairn, Aberdeenshire, Scotland
Attraction Type: Prehistoric Site
Location: Just north of the viewpoint parking area near the summit of the pass between Fettercairn and Banchory, on the B974
Website: Cairn O'Mount
Location map
OS: NO649806
Photo Credit: David Ross and Britain Express

More self catering near Cairn O'Mount >>