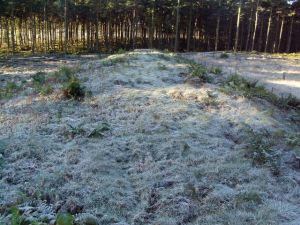 Capo Long Barrow
A very sizeable long barrow stretching 80 metres. The barrow is on an east/west axis, with the widest point at the east end, which is 28 metres across. The barrow rises to about 2.5 metres high.

What makes the Capo Long Barrow so interesting is that it is an earthen barrow, rather than a barrow composed of small stones. Though common further south in England, earthen long barrows are far less common in Scotland.

The barrow is built of scraped turf and earth and are relatively intact and stands on a low terrace overlooking the North Esk river.

There was originally a very similar barrow at Dalladies Farm, a mile to the north, but this has now disappeared. In the same area are the Cairn O'Mount burial cairn, and the Fordoun Stone Pictish cross.

About Capo Long Barrow
Address: Laurencekirk, Aberdeenshire, Scotland
Attraction Type: Prehistoric Site
Location: On the south fringe of Capo Plantation, off the minor road between the A94 and B966. Signposted from plantation gates.
Website: Capo Long Barrow
Location map
OS: NO633664
Photo Credit: Ewen Rennie, licensed for reuse under the Creative Commons Licence

Originally home to the Arnott family Kirkconnel Hall dates as far back as the 15th century, providing the property with great historic interest. It is only 10 miles north of … more >>

This superb ground floor cottage is set just five miles from Laurencekirk, near Edzell, and can sleep four people in two bedrooms.
Sleeps 4

This three storey detached townhouse property is situated in the village of Auchenblae, near to the town of Laurencekirk, in Aberdeenshire, Scotland, and can sleep up to six people in …
Sleeps 6