HERITAGE HIGHLIGHTS:   5th century shrine is among the earliest Christian sites in Scotland 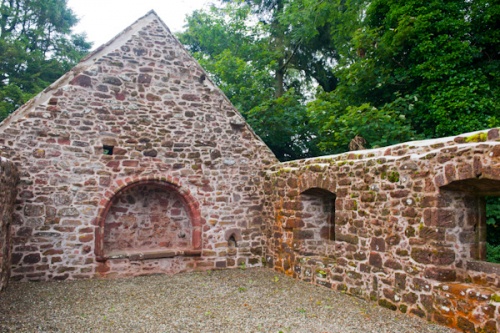 Fordoun was the site of a chapel founded by the 5th-century saint, Palladius, who is said to have preached and died here. Quite how he died is a matter of some mystery; for the historic records state merely that he 'was crowned with martyrdom' within a few years of his arrival in Fordoun. The saint's relics were preserved in a silver shrine with the chapel that he built at Fordoun.

The chapel - also known as Paldy Kirk - was the mother church for the Mearns region. The ruins of a 13th-century chapel built on the site of the original 5th-century building can still be seen beside the later church and there is still a well known as St Palladius's Well in the grounds of the manse.

The ancient ruins were rebuilt in the 16th century and again in 1788. In 1828 the roof collapsed and the chapel was finally abandoned in favour of the new and much grander building we see today. Within the ruined 13th century building is a holy water stoup and an aumbry in the north wall. The three large lancets are a 17th-century addition. 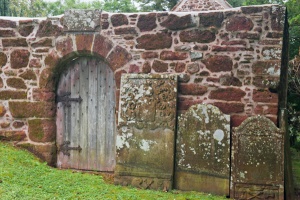 The most intriguing feature in the chapel ruins is not above ground, however. Protected by a metal grate are stone steps leading down into the earth to a crypt beneath the chapel floor.

One plausible theory is that the crypt was where the relics of St Palladius were held, and where pilgrims came to visit his shrine. King Kenneth III was one of those pilgrims; it is said that he was on his way to Fordoun when he died in AD 994.

Archbishop Shevez of St. Andrews came to Fordoun in the early 16th century. He found the shrine ruinous and gave money to rebuild the chapel. He also gave a new silver reliquary to hold the saint's bones.

In the vestibule of the church is the Fordoun Stone, a beautifully carved Pictish cross-slab. This was discovered in 1787 when the pulpit of the chapel was pulled down. The cross may have been hidden here during the Reformation. It shows a marvellously intricate cross and traditional Pictish symbols, plus inscriptions in Ogham and a Roman script.

There are several interesting old gravestones near the chapel (some actually leaning against the chapel wall). One stone to William Christison has a rather pointed reminder (literally); a finger points upwards to the heavens above, and a single word is carved - 'Home'. 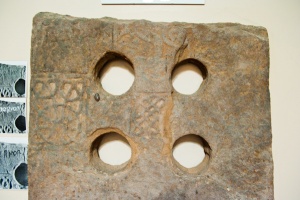 Palladius was the first Christian missionary in northern Scotland. He was ordained a priest by Pope Celestine in 430 AD and is thought to have preached in Ireland before arriving in the Mearns area of Scotland. Presumably, he found the natives less than receptive, for his martyrdom occurred not long after his arrival.

The chapel is easily found within the churchyard of Fordoun parish church. Somewhat confusingly, however, the parish church is not located in Fordoun itself, but on the edge of Auchenblae, a few miles away.

Near the churchyard entrance is a smooth granite column erected in memorial to George Wishart, a native of nearby Pittarrow, and one of the earliest Protestant martyrs in Scotland. Wishart was burned as a heretic in 1546 at St Andrews.

The church is generally locked, but the chapel is accessible at any time. 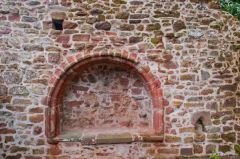