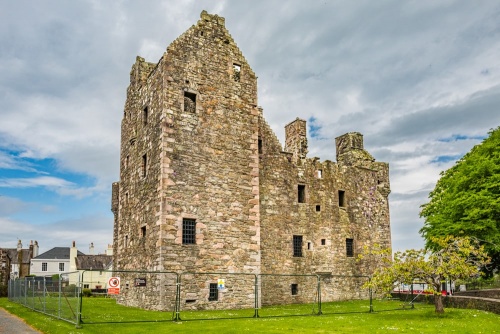 Greyfriars was founded in 1449 by James II but was dissolved during the Reformation. In 1569 the Greyfriars site was sold to Sir Thomas MacLellan of Bombie, the Provost of Kirkcudbright. Over the next thirteen years or so, Sir Thomas (d. 1597) built a four-storey tower house on an L-plan. In 1587 the castle was sufficiently complete for MacLellan to entertain James VI here.

The castle features a 'Laird's Lug', a secret spy hole built into the back wall of the fireplace in the great hall. By using the Laird's Lug, the lord could eavesdrop on his guests. 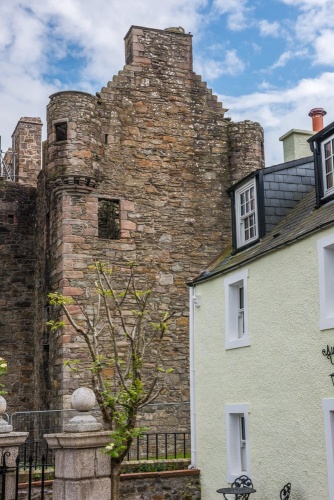 The view from Castle Bank

Notice that there are wide gunholes at ground level, but only small pistol openings higher up. This shows that MacLellan's Castle was part of the transition from medieval domestic architecture, when defence was a necessity, to more settled times, when comfort and luxurious living was more important.

Another feature of the castle is the 'below stairs' glimpse into the working conditions of a 16th-century servant.

The castle was in use for under two centuries, but after Sir Thomas's death, his heirs had a hard time making ends meet. The MacLellans ran up huge debts, partly due to unsuccessful investment in the Ulster Plantations.

By 1742, the direct descendant of Sir Thomas, a man by the name of William MacLellan, was working as a glover in Edinburgh, and by 1752 the castle was reported as being roofless and in ruins. Today, however, the interior is restored and largely complete, with a vaulted kitchen and storage areas below, and a great hall and family quarters above.

A memorial to Sir Thomas and Lady Grissel MacLellan, his wife, stands in Greyfriar's Church, beside the castle.

More self catering near MacLellan's Castle >>