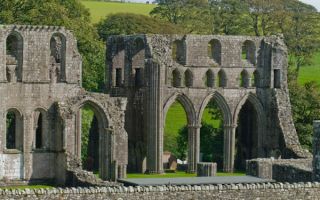 Dundrennan Abbey is perhaps the most complete Cistercian monastery in Scotland and features some of the best Gothic architecture in the country. The abbey was founded in 1142 by Fergus, the first Lord of Galloway, under the patronage of King David I of Scotland, as a daughter house of Rievaulx Abbey in Yorkshire. The same Cistercian monks from Rievaulx went on to found further abbeys in Galloway at Glenluce and Sweetheart.
The highlight of the remains at Dundrennan must be the chapter house, a wonderful example of Cistercian symmetry and style from the 13th century, with a beautiful cinquefoil arched doorway set between two windows. Grave slabs of four abbots are set into the floor beside a slab of blue marble that once held a funerary brass.

The abbey church is laid out in the traditional Cistercian cross plan, with three-storey high walls illuminated by a mix of blind and open arcading. The transepts are in attractive early Gothic style, and the west wall of the abbey church still stands to a very great height. The columns in the presbytery are notable examples of bundled, or clustered shafts, with bell-shaped caps.

Dundrennan's most famous moment in history came on 15 May 1586, when Mary, Queen of Scots, took refuge here following her defeat at Langside. Mary stayed overnight, and in the morning boarded a boat to cross the Solway to England and what she hoped would be shelter offered by her cousin, Elizabeth I. But, sadly, the refuge she sought became a long imprisonment and eventual execution, so her stay at Dundrennan was her last night in Scotland.

The location is magnificent, and the abbey ruins are a delight. Highly recommended.

More self catering near Dundrennan Abbey >>