HERITAGE HIGHLIGHTS:   Possibly home to a prince of Rheged? 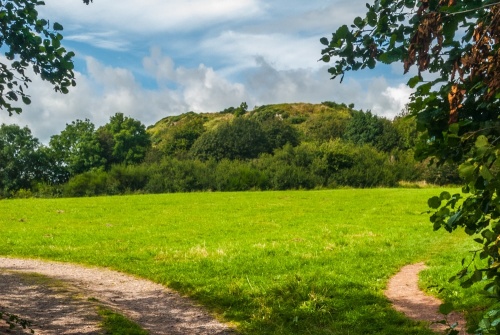 Mote of Mark from the east

Mote of Mark is a conical hill overlooking the Rough Firth near the village of Rockcliffe in Dumfries and Galloway. On the hilltop is a Dark Ages fort occupied in the 5th and 6th centuries.

The fort is small, measuring roughly 270 feet long and from 55 to 105 feet wide. A vitrified stone and timber rampart encircled the summit of the hill and below that was a stone wall. You can still see scattered boulders that once formed part of the wall. Further down the north and west sides of the slope are remains of a second rampart.

The main rampart was 4m wide (roughly 13 feet). The centre of the wall was filled with pebbles from the beach below, and large beach stones were used to top the wall. There were two entrances in the rampart; one in the south side and another in the north-east side. Both the north and south sides show evidence of burning. 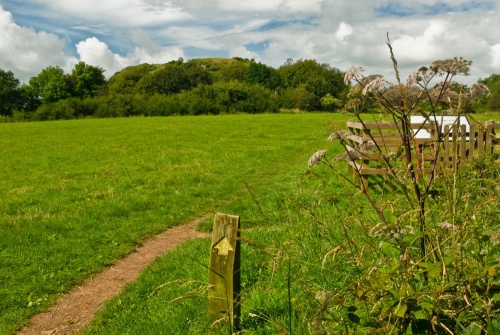 The footpath to the Mote

On the north side the fire was so hot that it fused the rubble core of the rampart into crude glass, a process known as vitrification. It seems very likely that this vitrification took place during an attack on the Mote of Mark in the middle to late 7th century. It was perhaps this attack that forced the site to be abandoned.

The rampart was probably built in the second half of the 6th century (i.e. after AD 550). The Mote of Mark appears to have been occupied continuously for roughly 120 years. It was occupied around the same time as the first rampart was built, or perhaps slightly earlier.

Excavations in 1913 uncovered the remains of two drystone huts within the ramparts. There were also large numbers of flints, Roman glass, Samian ware pottery, Early Christian moulds for casting brooches and a later piece of Mediterranean glass circa 9th century.

The most interesting discovery, however, was that the Mote of Mark had been used for large-scale metalworking. Gold, silver, iron and copper were all worked here. Fragments of 130 crucibles were found, and pieces of 482 moulds. Study of these moulds revealed that intricate, highly decorative items were produced as well as mundane things like pins and studs. 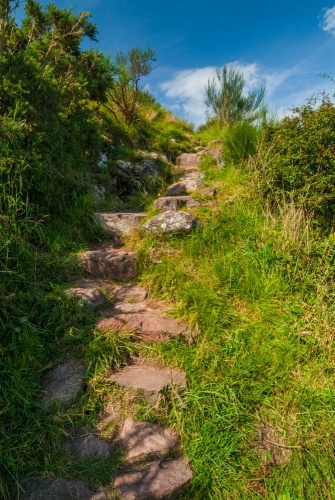 Climbing to the hillfort

The hillfort takes its name from Mark, King of Dumnonia, a character in the popular medieval romance of Tristan and Isolda. Over time the story of the star-crossed lovers Tristan and Isolda has become part of Arthurian legend.

Is there anything linking the Mote of Mark to King Arthur?

Not really. The hilltop site was occupied in the 5th and 6th centuries, which is roughly contemporary to the historical Tristan and the origins of the King Arthur tale. The quality of the archaeological finds does suggest that this was a high-status site, a fort of some importance, which would support a link to King Mark.

In all likelihood, however, the Mote of Mark was simply the court of a powerful local chieftain, possibly a prince of Rheged, the kingdom that took in large parts of what is now Cumbria in England and Dumfries and Galloway in Scotland. What is very clear is that whoever lived and worked at the Mote of Mark were linked by trade to the Mediterranean and the European continent. 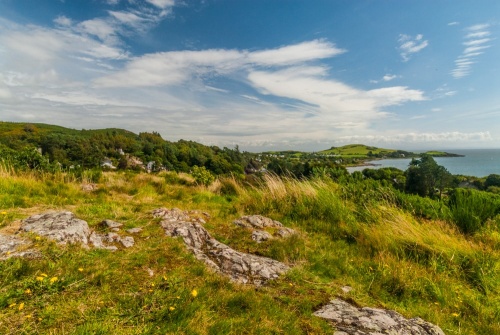 The view from the hillfort

This once again emphasises that the departure of the Romans from Britain around AD 410 did not bring about a collapse of society and a quick descent into the 'Dark Ages' as many early historians thought. Far from it; there was a very active trading network and people in Britain were in constant contact with goods and ideas from far beyond these shores.

There is a parking area near the end of the shore road in Rockcliffe. Take the signposted trail near the public toilets and follow it to the Mote of Mark which is clearly visible across a field. There is a fairly steep ascent to the hilltop but you are rewarded for your efforts with wonderful views.

Nearest Accommodation to Mote of Mark:

More self catering near Mote of Mark

More Hotels near Mote of Mark

More bed and breakfasts near Mote of Mark

Self Catering near Rockcliffe