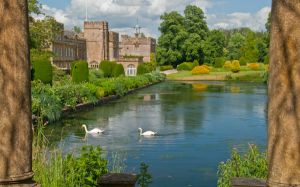 A former monastic house, expanded by one of Cromwell's aides in 1649, and set in beautiful award-winning gardens.
History
In 1136 Richard de Brioniis established a Cistercian monastery at Brightley in Devon. Unfortunately, the land at Brightley proved to be too poor for agriculture, and the monks abandoned the site. Then in 1141 Adelicia de Brioniis, sister of Richard, granted them land on the River Axe at Thorncombe. This site proved much more friendly to a community based on agriculture, and Forde Abbey was born.

Throughout the medieval period Forde earned a reputation as a centre of scholarship. Several abbots went on to play a part in national affairs, including the third abbot, Baldwin, who became Archbishop of Canterbury and died on Crusade. Another, abbot John Devonius, served as confessor to King John. 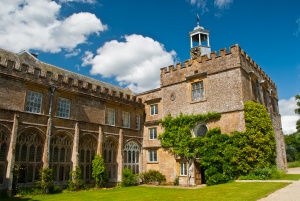 The main house entrance
The last abbot was Abbot Chard, who began a huge project, rebuilding the earlier medieval monastic buildings. His work was interrupted by the Dissolution of the Monasteries, however. Forde was handed over to the crown in 1539 and Abbot Chard went on to serve as the vicar of Thorncombe.

From 1543 the monastic estates were leased to Richard Pollard, and for the next century the Abbey was rented to absentee tenants, and the buildings were scavenged for building materials. Then in 1649 Edmund Prideaux bought the estate. Prideaux was an MP, and a supporter of Parliament against the monarchy. He later served as Attorney General to Oliver Cromwell in the Commonwealth. It was Prideaux who began to rebuild the abbey as a comfortable private residence.

Edmund's son also named Edmund, was unfortunately implicated in Monmouth's Rebellion of 1685 and thrown into the Tower of London, charged with high treason. The charge was based on the slenderest of circumstantial evidence; fully five years before the rebellion, Prideaux had entertained Monmouth on a visit to Forde. For this 'crime' he was accused of supporting the insurrection. Judge Jeffries, the 'Hanging Judge', demanded a penalty of ï¿½15,000 for Prideaux to escape the fate that met most of the accused who came before his court. 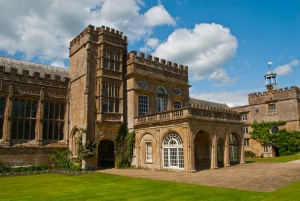 The front facade
Prideaux was eventually pardoned, and was succeeded as owner of Forde by Francis Gwyn, later Secretary of War under Queen Anne. Gwyn and his descendants made few changes to Forde abbey house, but they did lay out the wonderful gardens that surround it. The last Gwynn at Forde Abbey was John Fraunceis, who was forced by reduced circumstances to rent out the house. It was leased by the philosopher Jeremy Bentham, who hosted some of the great thinkers of the 19th century during his tenure here, men like John Stuart Mill and legal reformer Sir Samuel Romilly.

Gwyn died in 1846 and the entire contents of the house were sold. The house itself was purchased by a wealthy merchant who used only 5 rooms, allowing the rest of the house to moulder away. The house then passed through generations of the Roper family, who helped restore the house and its glorious gardens to something approaching their former grandeur.

What to see:
The interiors of the Abbey are a wonderful mix of restored monastic rooms and later elegant staterooms. Among the monastic chambers is the great hall, with its wonderful panelled ceiling, the 13th century monk's dormitory and Cloisters, the Chapel (formerly the monastic chapter house), and the vaulted Undercroft. Restoration work on the Undercroft in 1991 revealed a wall painting dating to the period 1270-1320. This is thought to be one of the oldest Cistercian paintings in England.

The state rooms include the Saloon, which has displays of Mortlake tapestries based on drawings by Raphael. The tapestries were made in London around 1620. Another state room is the Upper Refectory, once a dining area for monks and later a musician's gallery. The Prideaux Rooms are a suite of elegant receptions rooms added in the mid-17th century. The Bentham Room was used by Jeremy Bentham during his tenancy at Forde Abbey. Dominating the room is a large four-poster bed with damask hangings, made for a proposed visit by Queen Anne in 1714. Unfortunately, the queen died before the visit could take place, and the bed was used by less exalted sleepers! 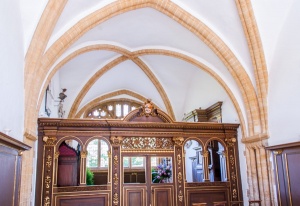 The chapel vaulting
The Gardens
The award-winning gardens are so popular that many people come to Forde Abbey just to see them and skip the house entirely! There are 30 acres of gardens, including a Great Pond which was used by the monks to provide power for water mills. Most of the garden we see today was laid out by Sir Francis Gwyn in the early 18th century, possibly with the help of Monsieur Beaumont, who also helped design the famous topiary gardens at Levens Hall in Cumbria.

The centrepiece of the garden is the Long Pond, which leads to an Ionic Tempietto (a small, domed temple) at one end. There is a bog garden, arboretum, rock garden, and a series of cascades and canals known simply as The Ponds.

One of the most popular features at Forde is one of the newest; a Centenary Fountain, which was built in 2005 to mark 100 years of the Roper family at Forde. The fountain reaches a remarkable 160 feet in the air, making it the highest powered fountain in England.

Forde has one of the most varied and fascinating gardens of any stately home I've had the pleasure of visiting in England. 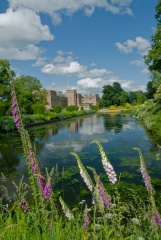 The abbey and Long Pond 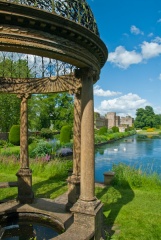 The Ionic Tempietto
and Long Pond 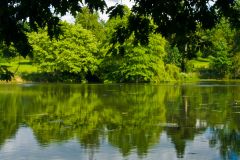 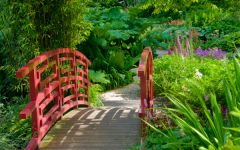 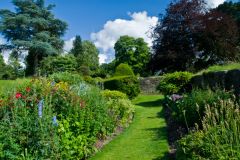 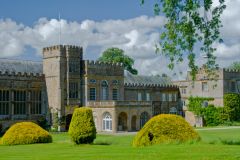 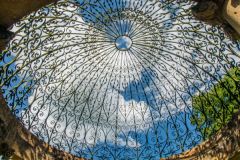 More self catering near Forde Abbey >>