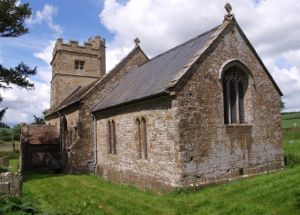 Seavington, St Mary's Church
Seavington is a small village just east of Ilminster. The 13th-century church of St Mary's is set well away from the village. It began as a chapel attached to South Petherton church, possibly founded by the De Vaux family.

The church was held by Bruton Abbey from the early 13th century. The canons of Bruton maintained a resident clerk and chaplain to serve the church. The Abbey held the living of Seavington St Mary until the Reformation, but after the Abbey was dissolved by Henry VIII the living passed to Bristol Cathedral.

Reading the history of the church provides several interesting anecdotes. In the 16th century, there were several complaints that the chancel was in poor repair. In 1547 it was reported that there was no English version of the Bible, and seven years later the church was reported as having no pyx. But that was nothing compared to what happened in 1577 when a woman suspected of being a sorcerer disturbed a church service.

St Mary's was greatly expanded in the 15th century and remodelled yet again during the 16th and 19th centuries. The nave features traces of medieval wall paintings discovered during restoration work, and the roof is 15th century. The 13th-century chancel arch is unaltered. The font is 12th century, suggesting an earlier building on the site.

One unusual feature of the interior is a pair of squints, one either side of the chancel arch. These small holes allowed views of the altar for people seated to the side of the main chancel arch. Squints in themselves are not rare, but it is unusual to find a church with two squints.

There are 6 bells, the earliest of which dates to 1621. There is a funeral bier dated 1694, and a 14th-century aumbry, or stone cupboard, set into the wall.

The font is probably the oldest feature of the church; this dates to the Norman period and is a simple tub design.

The church is no longer in regular use and is in the care of the Churches Conservation Trust and there is a keyholder nearby.