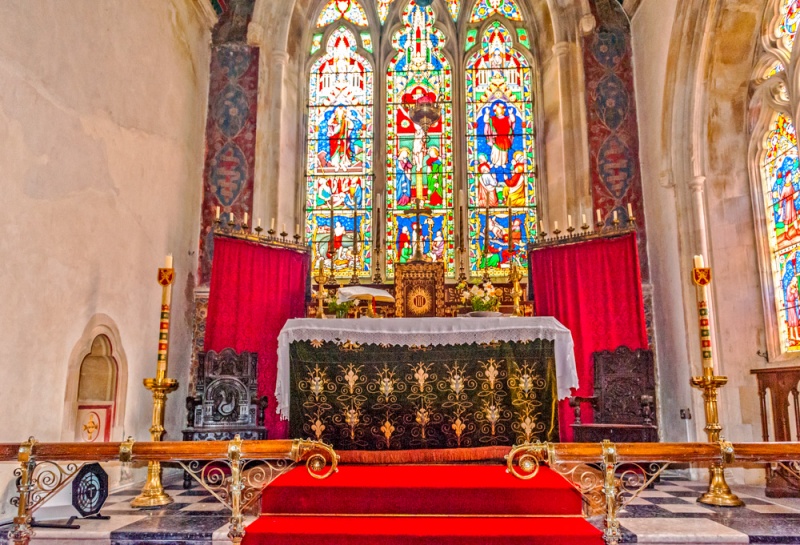 The name of Monkton Wyld gives a clue to its history. The word 'Monkton' refers to the fact that the monks of Forde Abbey owned land here in the medieval period. The 'wyld' has nothing to do with a wild landscape, but seems to be a reference to 'snare', or 'trap', suggesting that the woodland here was a lair of poachers.

Though the area here has been settled for a long time, the parish was only created in 1850. St Andrew's church was begun two years previously, by the architect RC Carpenter, better known for his restoration of Sherborne Abbey. Carpenter was a popular architect specialising in church design and a member of the Cambridge Movement, who held that the only style of architecture suitable for worship was that used between 1300 and 1348. The theories of the Cambridge Movement later became known as Ecclesiology.

At Monkton Wyld, Carpenter created a beautiful Victorian Gothic design in Decorated style, and a wonderful example of Ecclesiological ideals. Central to those ideals was a reverence for saints and heavy reliance on religious symbolism. The Ecclesiologists also believed that holiness needed to be expressed as beauty, and Carpenter created a church that expressed that ideal.

Carpenter was hired by Elizabeth Dodson (or Hodson as the church guide spells it) to build the new church, with aide from the Incorporated and Diocesan Church Building Societies. Carpenter was also charged with designing the neighbouring parsonage, school, and schoolmaster's house. 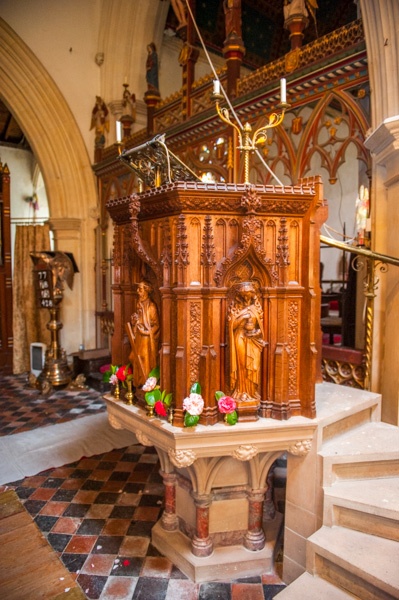 Mrs Hodson named her son-in-law Rev. Robert Sparke Hutchings as the first vicar of Monkton Wyld. The second vicar was Lester Lester. A local story says that Rev Lester was left a substantial bequest on condition that he change his name to Lester. Unfortunately the bequest did not specify which name needed to be changed. To make sure that he did not miss out on the bequest he promptly changed both his first and last names to Lester.

The church is built of blue lias and flint, dressed with Caen stone. It is approached through an oak lych gate, giving access to a sloping path to a timber porch. The body of the church consists of a nave and a chancel of almost equal size, with side aisles and a central tower topped by a broach spire, one of very few such spires in Dorset. The steeple rises 120 feet above the church.

The windows are superb, with glass by Cook and Powells of London. The chancel windows illustrate scenes from the life of St Andrew.

The magnificent oak pulpit stands on a base of marble and Mansfield stone. The carvings on the side panels commemorate St Andrew, St Cecilia, Queen Margaret of Scotland, and Mary Magdalene. Looked for the inscribed panel dedicating the pulpit to the 'pious Memory of Elizabeth Hodson, Foundress of this church who fell asleep March 23, 1883 aged 85'.

The chancel fittings include brass altar rails, traceried choir stalls, and a superb decorated rood screen, all installed by Rev. John Camm and his wife Caroline. Look up and admire the painted stencilled ceiling. Rev Camm was responsible for the altar of Bath stone, inscribed with a Latin phrase that translates as 'Let the old teaching give way to the new ritual', a reminder that this was very much a church in line with the 'High Church' style of worship.

The font is of Caen stone, topped by an oak lid. In the sanctuary is an oak chair, with a back made from a medieval traceried panel and framing carved in the 17th century.

In the churchyard is the grave of James Harrison (d. 1864), a geologist who found the earliest British dinosaur, which was named Scelidosaurus harrisoni after him.

I came to Monkton Wyld on a dismal, rainy day, but as soon as I stepped into the church interior the gloom dispersed; what a magnificent example of a country church in Victorian Gothic style. The richness of decoration is sumptuous, the materials are vividly coloured and beautifully crafted. This is a church to savour and to remember long after you've left. 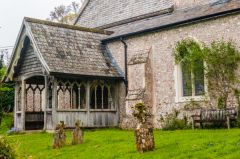 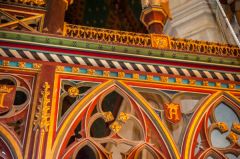 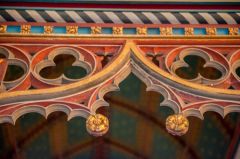 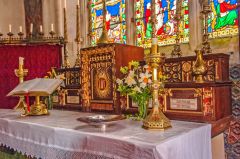 More self catering near Monkton Wyld