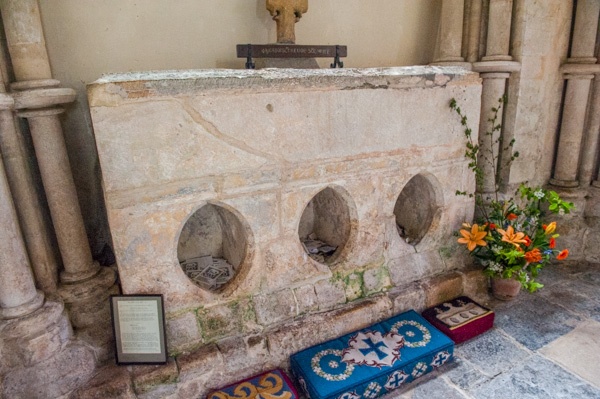 The historic church of St Candida and Holy Cross has been dubbed The Cathedral of the Vale, the Vale, in this case, being Marshwood Vale, split by the River Char. The unusual name is a combination of two words. The first part may simply refer to the white colour of local stone used to build the church, or, just as likely, it is named for St Wite, whose relics are buried here. This is the only church in England apart from Westminster Abbey to contain an original medieval shrine with relics of a saint.

The first record of a church in Whitchurch Canonicorum comes from long before that; in AD 881, Alfred the Great granted the estate of Hwitancircian to his son Ethelwald. At that time Whitchurch was the largest parish in England. Alfred is also credited with building the first church.

William the Conqueror gave the church to St Wandrille's monastery in Normandy, and it was the monks who extended the Saxon church in 1190 to create the core of the building we see today. In 1190 they sold the church to the Bishop of Sarum (Salisbury). The Bishop gave the manor - then known simply as 'Whitchurch', to Robert de Mandeville in exchange for an annual payment.

The De Mandeville family extended the church further and built the shrine of St Wite (see below), then in the mid-13th century they presented it to the Bishop of Bath and Wells. Predictably, the Bishop of Salisbury objected. A compromise was reached allowing the parish tithes to be equally divided between the two canons. At this point, the 'Canonicorum' part of the name was added.

The Latin form of St Wite's name is Candida, which gives us the church's dedication. Canonicorum means 'of the canons', a reference to the fact that the benefice paid tithes to the both Salisbury and Bath and Wells. 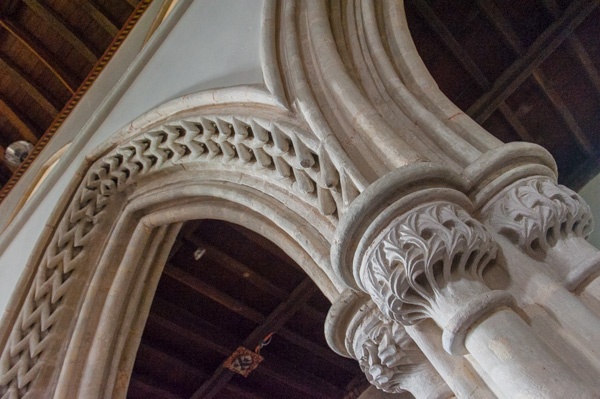 The earliest part of the church is the 12th-century doorway, set within a 15th-century porch. The striking west tower is also 15th century. The nave is mainly 13th century, and the capitals are beautifully carved with foliage and flower symbols.

In the chancel is the heavily decorated tomb of Sir John Jeffery (d. 161). Jeffrey served at the court of Elizabeth I. There is also a lovely Jacobean pulpit and a beautifully carved Norman font in the shape of a chalice.

We do not know much about Wite, or even when she lived, though the most likely time period is the 9th century. According to local legend Wite was a Saxon woman who lived as a hermit on the clifftops above the village. She is said to have maintained fires to act as a beacon for sailors.

One story suggests that she was killed by Danish raiders who landed at Charmouth and ravaged the surrounding countryside. You can still see St Wite's Well, the water from which is reputed to have healing properties. After her death, she was buried in the church and people attributed miraculous cures to her intervention.

Alternative theories have been put forward about St Wite. One theory is that she is the same 5th-century saint known as Gwen to the Celts and Blanche in French. Gwen, or Blanche, was a daughter of the Prince of Brittany. Her relics are said to have been brought to Dorset in the 10th century when a large number of Bretons settled in the west of England.

Another theory is Wite is the same Witta who worked with St Boniface in the 8th century and died in Germany. Alternatively, she was one of the evangelists accompanying Witte. 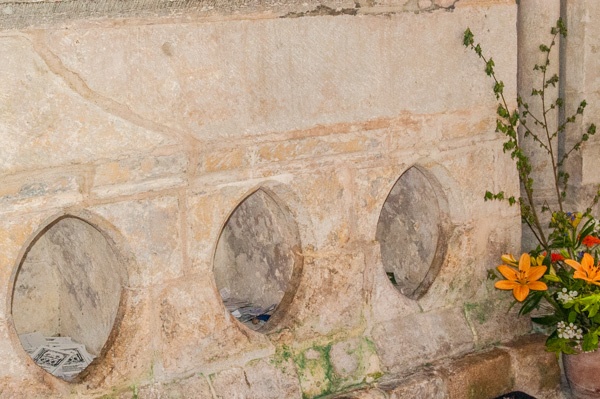 St Wite's shrine is set into the wall of the north transept. The 13th-century shrine is made of two parts. A stone coffin with a top of Purbeck marble holds the bones of St Wite. The coffin is supported on a stone base with three holes in it.

It is remarkable that the shrine still exists, for most other shrines were destroyed during the Reformation, and the saint's bones scattered. It is possible that St Wite's shrine was spared because it looks so simple and its sacred purpose could be concealed from zealous inspectors. In 1900 the shrine was opened during repair work on the church. Inside was a lead box inscribed with a Latin inscription reading:

The lead box was opened, and inside were the bones of a woman.

St Wite is remembered even today by the people of Dorset. In a public vote in 2008 a Dorset flag was adopted, with St Wite's cross as the new county symbol. The red and white cross is set against a bright yellow background.

Under the vestry is the grave of Sir George Summers, whose real-life adventures inspired the plot of William Shakespeare's play 'The Tempest'. Sir George was born in 1554 and lived at nearby Berne Manor before sailing to the new American colony of Virginia. He is credited with claiming Bermuda for England. His heart is buried there, but his body lies in a family vault beneath the church.

Another historic tomb is that of John Wadham of Lyme (d. 1584). A more recent memorial is a brass plaque to Edgar Cookson, a Victoria Cross recipient who was killed at the Battle of Es Sinn in 1915 during the Mesopotamian campaign.

The 'Cathedral of the Vale' is a remarkable historic building. The shrine of St Wite is an extraordinary medieval survival, offering a glimpse into the medieval world and the life of pilgrims who journeyed far to reach this quiet village and pray for healing.

The church is normally open daylight hours and was open when we visited. 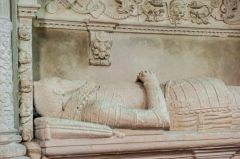 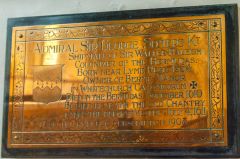 More self catering near Whitchurch Canonicorum