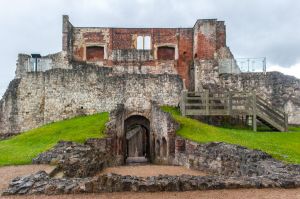 Farnham Castle is an impressive motte and bailey castle built by Bishop Henry de Blois in 1138. The castle served as the seat of the powerful Bishops of Winchester. The location at Farnham was conveniently located on the main route used by the Bishops between London and Winchester.

It is possible that Bishop Henry's castle merely extended an earlier residence begun by Bishop Giffard 1100 – 1129. Bishop Henry fled into exile when Henry II came to the throne, and Henry's troops destroyed the castle in 1155. When Bishop Henry returned to England in 1158 he began to rebuild the castle. He is responsible for the shell keep, but the surrounding buildings are likely the work of his successors, Richard Totclive and Godfrey de Lucy. Though it has been altered many times over the centuries, Farnham remains essentially a Norman fortress.

The keep is a curious building; it does not stand atop the motte but encloses it. The motte was built around the remains of Bishop Henry's original keep, then the space filled in to create a new, larger motte, and the wall built around the mound. After it was filled in, the original keep and motte were lost for over 400 years until exposed by archaeologists in 1958.

The keep was surrounded by an outer earthwork ditch and curtain wall. Much of the wall still stands, with three small towers projecting from it at intervals. Access is through a later 13th-century gatehouse with large flanking towers. Inside the walls is a shell keep and a triangular inner bailey, and the main buildings are in the south range, not in the keep. This is entered through a tall red-brick gatehouse built by Bishop Waynflete in 1470. 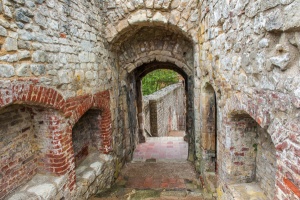 This is an eye-catching structure, with corner turrets and exaggerated machicolations. From the gatehouse, steps lead up to a screens passage that used to link the hall and the kitchen. You can still see a row of lancets in the kitchen wall, showing that the inner bailey buildings were not meant to be defensive, but were built for comfort and light. To the east the private apartments built for the Bishops are set around a small, private courtyard.

The castle was garrisoned by Royalist troops in the Civil War. On 26 November 1642, a regiment of Parliamentary dragoons and a regiment of horse under Sir William Waller attacked Farnham. They blew up the central gate and fought their way to the outer courtyard. Waller led an assault on the keep, and the Royalist soldiers were forced to surrender.

The shell keep was dismantled on the orders of Parliament so that it could not be held against them.

Visitors can see the imposing towers, residential quarters, and two medieval chapels within the castle grounds. Only the keep itself is in the hands of English Heritage, while the Bishop's Palace and other residential courtyard buildings are used for corporate events, weddings, and other functions. One of the courtyard rooms has been converted into a very interesting museum, with sliding panels telling the often violent story of Farnham's history.

The highlight for my money is the keep itself. Wooden steps lead down into the heart of the keep, where the original 1138 keep remains can be seen. At the bottom of the keep, a well shaft extends even further into the earth. The walls are fully 3 metres thick.

The sheer size of the base suggests that it supported a keep some 3-4 storeys high, probably with an entrance at first-floor level, accessed by a wooden ladder from the ground. Think of Farnham Castle as a complex of buildings, not a single, homogenous castle. There is so much history within this old walls! 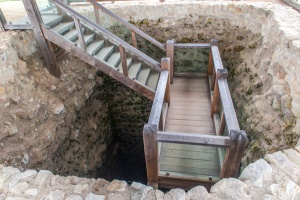 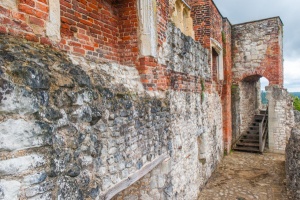 Screens passage from hall to kitchen 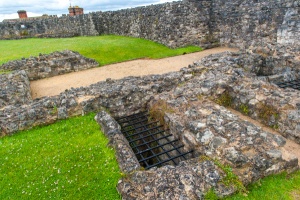 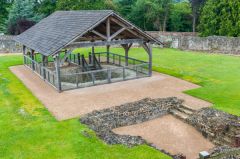 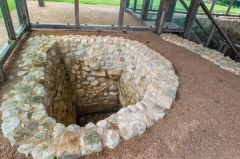 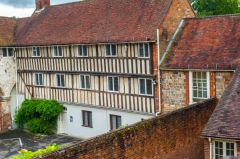 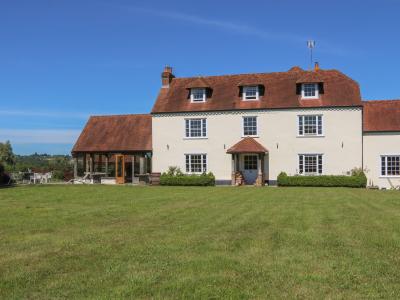