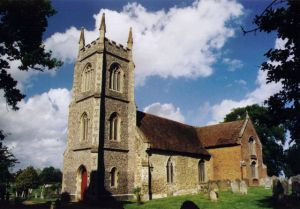 Hartley Wintney, St Mary's Church
There are two parish churches in the Hampshire village of Hartley Wintney; one is a late Victorian building dedicated to St John the Evangelist. The other, standing on the hillside above St John's, is St Mary's, a 13th-century church, now rendered redundant, and in the care of the Churches Conservation Trust. St Mary's is thought to have been built for the nuns of long-vanished Wintney Priory.

The nave and chancel of St Mary's date to the 13th century, while the tower and transepts are 19th-century work. The oldest feature is a 12th-century piscina near the south window. The interior furnishings are extremely simple, with a Georgian altar rail and Jacobean carved table. There are a set of hatchments and a royal coat of arms dated 1705.

Areas of 13th-century wall paintings can be found in the nave and chancel. One depicts St George killing a dragon. There is also a hagioscope, or 'leper window' in the chancel. These type of narrow windows are traditionally said to have been built so that lepers could view the high altar during services, without entering the church.

An alternative theory is that these 'leper windows' were in fact used so that a watcher could note the moment when the priest raised the host over his head, and then ring a bell, so that workers in the fields could know to pause in their work, cross themselves, and thus share in the celebration. Yet another theory is that the hagioscope allowed nuns to watch the service without mixing with parishioners.

In the graveyard are the burial places of two military generals; Field Marshall Viscount Alanbrooke, Chief of the Imperial General Staff in WWII, and 18th century General Henry Hawley, who was saddled with the unenviable monicker 'Hangman' for his reputation of harsh treatment towards his enemies and the men under his own command.

Hawley was rumoured to have been the illegitimate son of George II, and became infamous for his severity towards supporters of Bonnie Prince Charlie following the Battle of Culloden in 1745.

On a more pleasant note, architectural historian William Lethaby is also buried in the churchyard.