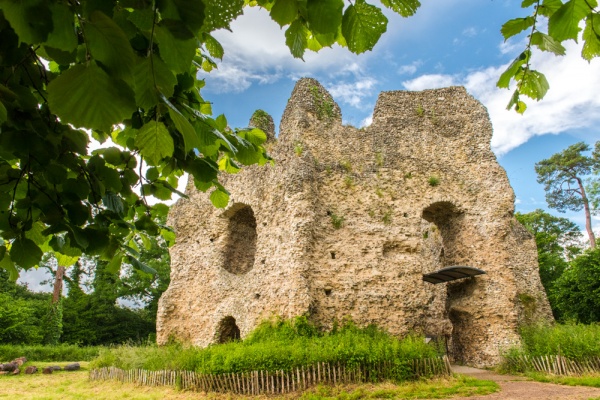 In 1204 King John visited the town of Odiham, Hampshire. He must have been impressed with what he saw, for 3 years later he began building a royal castle in a loop of the River Whitewater just north of the town. The location was probably chosen because it lies halfway between Windsor and Winchester.

Odiham Castle is one of only three royal castles built during King John's reign, making it something of a rarity. The king seized 20 acres of land from Robert the Parker for his new castle, which took 7 years to complete.

The royal accounts provide a fascinating glimpse into the construction, which involved raising earthwork banks topped by a palisade, and a kings house, or 'domus regus'. The accounts also show that the castle was protected by square moats filled with water from the river. Over the course of seven years the king spent in excess of £1000 on his new castle. 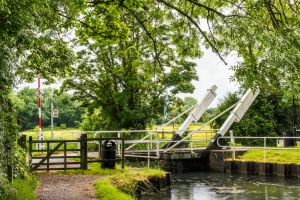 The castle trail starts at this lock
on the Basingstoke Canal

The design is composed of a keep within three baileys, guarded by moats and banks. During King John's reign, the design of stone keeps was changing from square to round, but Odiham's keep is octagonal in plan, an unusual compromise shape and very rare for this period. At each corner of the octagon was a thick stone buttress to support the weight of the walls and roof.

Just two years after it was finished Odiham had to withstand a siege by the French under the Dauphin Louis. A garrison of just 13 men held out for two weeks before submitting. Henry III repaired the siege damage, and the details of his royal accounts make for interesting reading. We know that the king spent 77 shillings on lead to mend the tower roof. Historians are able to calculate that the roof weighed a staggering 22 tonnes, and was supported by stone buttresses and a central column. 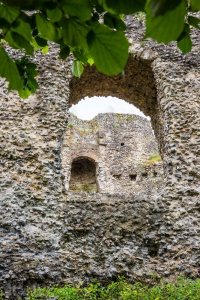 Remains of a large
window on the east side

In 1236 Henry III gave Odiham to his sister Eleanor of Pembrokeshire. Two years later Eleanor married Simon de Montfort, a French nobleman who was later given the title Earl of Leicester. Under de Montfort Odiham would have been one of the most important centres of power in England.

Between them, Eleanor and Simon de Montfort transformed Odiham from a military castle into a relatively comfortable fortified residence. Simon de Montfort later fell out with his brother-in-law and was the primary figure behind the Baron's Revolt against the crown. He lost his life in the Battle of Evesham in 1265 and Eleanor was exiled. Odiham reverted to the crown.

Edward I restored the castle and spent Christmas at Odiham in 1302. His son Edward II gave Odiham to one of his favourites, Robert le Ewer. Le Ewer was evicted in 1322 but attempted to retake the castle by force, forcing the king to repair the castle once again. Edward III inherited Odiham, and granted it to his queen Philippa of Hainault. Under Philippa, the castle reverted to the role of a hunting lodge.

When David II of Scotland was captured at the Battle of Neville's Cross in 1346 he was imprisoned at Odiham for 11 years. The castle began to decay during the 15th century, and the dressed stone facing was robbed for other building projects, leaving the rubble core we see today. By 1605 the castle was little more than a picturesque ruin, and in 1792 the Basingstoke Canal was dug through the castle's outer bailey. 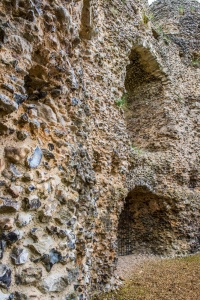 The keep is in a ruinous condition, but enough remains to show that it stood 3 storeys high, with fireplaces on the upper two floors, suggesting the presence of a great hall for communal living with a solar, or private chamber above. You can see joist holes ringing the keep interior. These supported timber joists, radiating out from the central column like spokes on a wheel. You can also see a doorway and a stone cupboard, or aumbry, built into the wall.

In the centre of the keep is a circular memorial commemorating the 800th anniversary of the Magna Carta, signed by King John in 1215.

Getting to Odiham Castle is half the fun. The castle can only be reached by footpath along the canal, from a lock on Mill Lane. The castle is signposted off the B3349, which leads you to Mill Lane. A few hundred yards along Mill lane there is a small layby on the left, just before you reach a lock.

From the lock, a signed footpath leads along the north bank of the canal for a half-mile to the castle. The going can be wet if it has been raining, so good footwear is in order. There are no visitor facilities, but there are several useful information panels that help give a good idea of what the castle looked like. 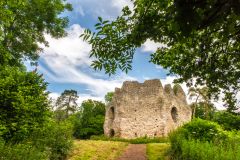 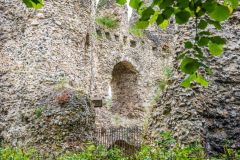 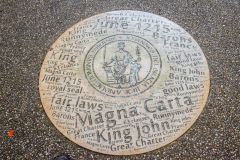 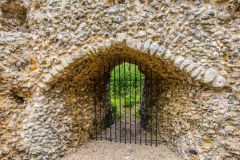 More self catering near Odiham Castle