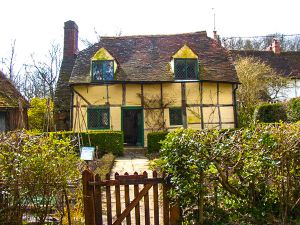 The front facade of Oakhurst Cottage

A small half-timbered house, built in the 16th century. Oakhurst has been refurbished by the National Trust as a farm labourer's dwelling, with displays relating to 4 centuries of occupation. The house is set in lovely Victorian-style gardens.

Located just off the cricket green in Hambledon village is a small timber-framed 16th-century cottage. Oakhurst is just one of several historic properties owned by the National Trust in Hambledon, but it is the only one regularly open to the public.

Oakhurst was probably not intended for habitation but as a barn. Sometime in the 1500s it was converted into a cottage and was lived in until the mid-20th century. The building was rarely renovated or updated, and so provides a wonderful glimpse into the past. See the kitchen with its huge brick hearth topped by a dark oak beam, and the uneven floor laid with large tiles.

The cottage has been furnished with traditional country furniture, showing how residents lived here over the centuries, with a focus on the Victorian period. Oakhurst is set in a small cottage garden, combining practicalities like vegetables, fruit, and culinary herbs, with colourful flowers. The gardens have been planted to resemble contemporary paintings of Oakhurst.

To one side of the garden is a small barn, beside an outdoor privy. The barn has been furnished with traditional tools that would have been used for gardening and household maintenance. The privy was in use up until 1994 and was regularly visited by the last Hambledon nightsoil man.

Due to the cottage's small size and age, it can only be visited via a pre-booked, guided tour. See the National Trust website for tour details.

Images are republished with gratitude under a Creative Commons license and are copyright as noted. 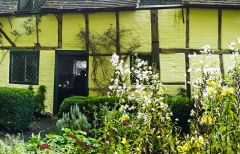 More self catering near Oakhurst Cottage >>