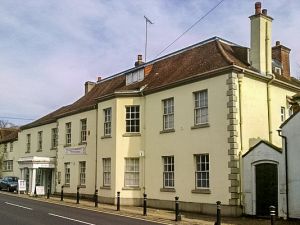 Haslemere Educational Museum
Behind a simple Georgian facade are housed an impressive collection covering geology, natural history, and ethnography. In fact, this is one of the largest museums in the south of England. The museum was the brainchild of a wealthy Quaker doctor named Jonathan Hutchinson.

In 1866 Jonathan Hutchinson, a Quaker physician and journalist, purchased a house at Inval, outside Haslemere. Hutchinson was a philanthropist and wanted to share his enthusiasm for the natural world, including geology, botany, and social history, with less privileged members of society.

In 1888 he turned several outbuildings on his farm into the Haslemere Educational Museum, with an eclectic mix of displays including items he had collected during his travels. The initial displays included such diverse items as an elephant skull, stuffed birds, and fossils. Hutchinson kept adding to his collection, and in 1895 the museum moved to larger premises on Museum Hill.

Hutchinson did much more than just open his collection to the public; he gave weekly lectures on science and the lives of English poets, illustrating the talks with items from his collection. Some of Hutchinson's scientific theories caused a commotion, particularly when he spoke about evolution, immortality, and death, as his views clashed with many of his more traditionally-inclined neighbours.

Hutchinson also opened a museum in Selby, Yorkshire, where he had been born. He published and edited a Museum Gazette newsletter to spread his ideas.

The museum is based around three themed galleries, covering Human History, Natural History, and Geology. The Human History gallery includes prehistoric stone tools, classical pottery from Greece and Rome, an Egyptian mummy, and a collection of European peasant art.

The Natural History gallery includes some wonderful examples of animals from across the globe, including a giant Japanese spider crab, and a Siberian bear dubbed 'Arthur'. There is a large exhibit of Victorian and Edwardian stuffed birds in original wooden cases. The Geology gallery follows a timeline, from a meteorite to early fossils of marine life, and a display of fascinating minerals.

The Museum is more than just the displays inside the main building; to the rear is a large historic garden, set within a curving ha-ha to provide views towards Lythe Hill. There is a meadow and small pond, with a gazebo. The grounds are planted with unusual varieties of trees and shrubs, including a Ginko Biloba tree. A woodland walk loops past an observation beehive and bird feeders, offering a chance to view the natural world up close.

A Museum with a Difference

Hutchinson was ahead of his time in his notions of what a museum should be. He wanted an 'open' museum, and thought that people learned as much by handling objects as by looking at them, and abhorred the typical museum of his day, with displays out of reach behind glass cases.