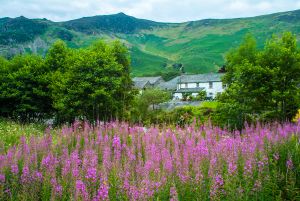 Grange is a lovely village at the head of Borrowdale, popular as a centre for walking and outdoor activities. Nearby is the natural feature known as the Bowder Stone, a huge boulder tipped up on one end.

Grange, more often called 'Grange in Borrowdale', is at the entrance to the 'Jaws of Borrowdale', where the valley narrows, bounded on either side by Castle Crag and Grange Fell. The village is entered over a picturesque double-arched bridge, built in 1675.

The origins of Grange go back to at least the early medieval period. In 1209 Alice de Rumelli sold estates here to the monks of Furness Abbey. The monks cleared the land and established an outlying farm, or grange, in the valley.

The monk's grange gave its name to the hamlet that grew up at the northern end of the valley. The monks harvested oats, barley, and rye, and produced charcoal, but their main focus was wool. They established trade routes, leading packhorses east and south over the surrounding fells.

Most of the picturesque cluster of cottages are built of grey local stone, but one building stands out from the rest for its whitewashed walls. This is the parish church, dedicated to the Holy Trinity and built in 1861 by Miss Margaret Heathcote so that villagers did not have to make the long trek up the valley to the parish church.

Miss Heathcote was notoriously hard to please, and went through 7 curates in just 11 years! There is also a small Methodist church, built nearby in 1878.

Though it seems small and remote, Grange has royal connections. In 1910 Princess Louise, sister of King Edward VII, wanted to create a suitable memorial to her brother on his death. She bought Grange Fell and erected a memorial stone to the king on top of the fell.

Princess Louise also officially presided at the opening ceremony for Brandlehow Wood. one of the first properties purchased by the National Trust. Another very local celebrity was author Hugh Walpole, who lived at Brackenburn, just a mile from Grange, between 1924 and 1941.

Like so much of the Lake District, Grange is a centre for walking. At almost any time of year the village is crammed with walkers, and in the summer it can be very difficult to drive through the narrow lanes through the village. Parking is very much a haphazard business, especially on sunny summer days.

But with those caveats, it's worth repeating just what a fantastically scenic area this is; the village is absurdly pretty, in an area that writer Alfred Wainwright called one of the prettiest square miles in Cumbria. And he's right.

Because the village is so popular as a walking centre there are a wide variety of bed and breakfasts and self-catering options, and the Lodore Hotel is just a short distance away on the main road from Keswick. 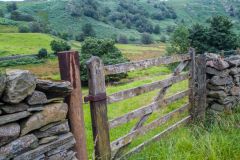 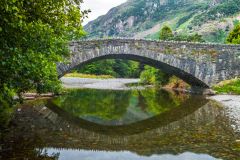 Nearest Accommodation to Grange in Borrowdale:

More self catering near Grange in Borrowdale >>

More Hotels near Grange in Borrowdale >>

More bed and breakfasts near Grange in Borrowdale >>