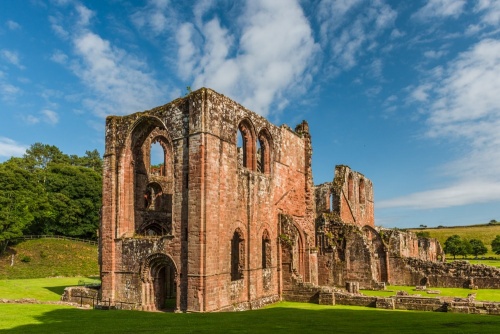 In 1124 Stephen, Count of Boulogne and later to become King of England (or not, depending on your allegiance to Queen Matilda!) founded an abbey for monks of the Order of Savigny at Tulketh, near Preston. Just three years later Stephen moved his abbey to Furness, further north. In 1147 the affiliation changed as the Savigniac Order merged with the Cistercians, and from this date, Furness was a Cistercian house.

The original monastic buildings were probably of wood; temporary structures in use while substantial stone ones were built. But the wooden buildings must have been in use for some time, as the first order of business was not to build dwellings, but the abbey church.

The earliest stone structure remaining is the south wall of the church, dated 1127-1147. Certainly, the church was not finished when the Scots raided Furness in 1138 and destroyed it, chasing off the monks. They returned in 1141, rebuilt the church, and erected more permanent stone buildings to create one of the great medieval English abbeys.

From simple beginnings, Furness grew and prospered. Over the next several centuries the abbey received endowments and accumulated properties until by the time of the Dissolution of the Monasteries it was the second wealthiest monastery in England, after Fountains Abbey. 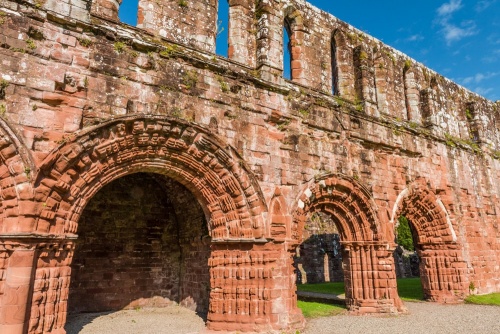 The monks built a harbour on Walney Island for shipping iron and wool and founded a castle on Piel Island to guard the harbour. They also built a castle at Dalton to serve as a courthouse and administrative centre. So you can see that Furness was not simply a quiet place for monks to live, work, and pray, but the centre of a bustling commercial, legal, and administrative empire.

But there was more to Furness than simply filling the abbey coffers. The monks established a grammar school and built a hospital for 13 poor men. By the time of the Dissolution, the hospital also looked after 8 poor widows.

They erected outlying granges at Beaumont and Hawkshead. Some of the Hawkshead grange still stands and is in the care of English Heritage. The number of monks at Furness does not seem to have fluctuated much; there were 23 in 1381, 33 in 1534, and 39 in 1537.

Like so many other great monastic foundations Furness suffered at the hands of Henry VIII's commissioners, and the end came on 9 April 1537. The abbey was destroyed, and building stone removed, but enough remains to give us a clear idea of just how rich and powerful Furness was in its heyday.

After the Dissolution Furness was sold into private hands. The abbot's house was used as a dwelling by the High Sheriff of Cumberland. The abbey estate was annexed to the Duchy of Lancaster in 1540, and the house leased to tenants. 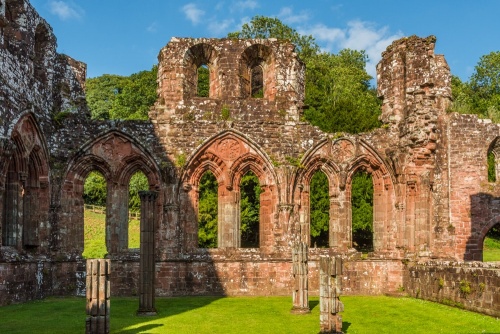 In the 17th century, Sir Thomas Preston built a house, known as Abbey House, or Manor House, where the museum and car park now stand. Furness became a popular destination for Victorian tourists due to its scenic location, and this tourism boomed after the Furness Railway Station opened. The Abbey House was then rebuilt as a railway hotel.

There are substantial remains of numerous outbuildings, including stables, a guesthouse, workshops, barns, and storehouses, in addition to the great abbey church, which still stands to its full height in places. The church, like the rest of the buildings at Furness, was built of local red sandstone, which seems to glow with colour. It is not the hardest-wearing stone, however, and the effects of weathering are obvious.

Much of the church is 12th century, but the east end was extended and rebuilt in the 15th century. There are a very good piscina and sedilia in the presbytery, and substantial remains of a late 15th-century bell tower, built partly inside the church due to space constraints. 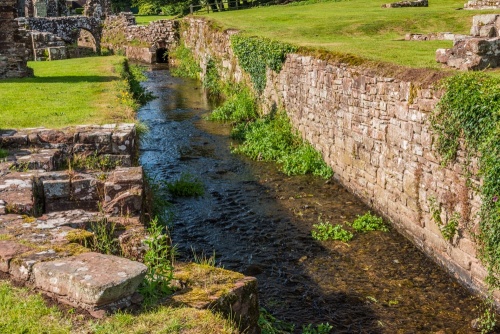 One highlight is the dorter, or dormitory where the monks slept, and beneath it the chapter house. There is a separate abbot's house, made from an old infirmary, and a later infirmary with its own chapel and kitchen.

One interesting feature is that so much of the original water and drainage system has survived relatively intact. The site was enclosed by a precinct wall, both for privacy and security. Much of the wall remains, especially on the east side of the site.

I seldom mention on-site museums in these articles - usually because there's not much to say about them! But in the case of Furness Abbey, I must make an exception. I thought the museum, located in the visitor centre where you enter the site, was exceptional.

There was such a wealth of detail and excellent displays of historic artefacts found on the site that I really felt I gained some insight into the history and development of Furness Abbey. The museum hosts a collection of medieval effigies including two unusual 13th-century effigies of knights in armour.

These effigies adorned the graves of powerful abbey patrons in the abbey church. They are rare in that they show the deceased clad in full body armour with their faces completely hidden behind their square-topped helmets. 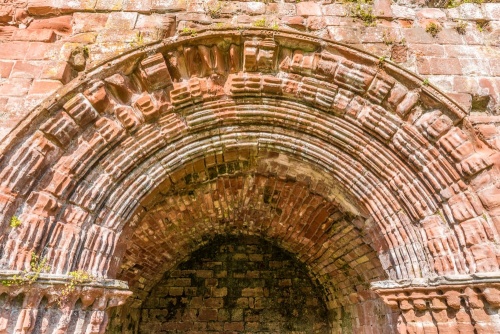 One of the items on display in the museum is an extraordinary 12th-century silver-gilt crozier discovered during excavations under the presbytery. A crozier is the decorative top of a staff shaped like a shepherd's crook and used by bishops or abbots during church ceremonies.

When a crack appeared in the walls surrounding the east end of the abbey church, building experts were called in to stabilise the foundations.

When they dug under the rotting timber foundations of the presbytery they discovered the undisturbed grave of an early medieval abbot. Within the grave was a beautifully preserved crozier made of silver gilt. The head of the crozier is decorated with images of the Archangel Gabriel battling with a dragon. 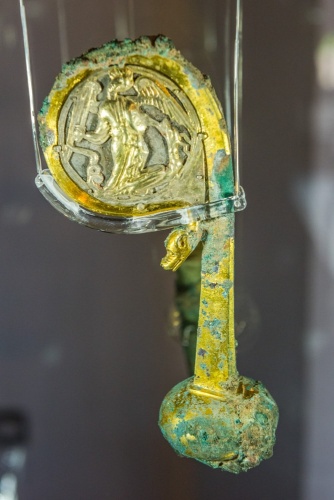 Also in the grave was a jewelled ring. The ring is crafted with a sharp point o its inner face so that it would give the wearer constant pain - a form of mortifying the flesh as a reminder against being seduced by the pleasures of the world.

Furness Abbey is very well signposted from surrounding roads. It is located on Abbey Approach, just off Abbey Road on the eastern fringe of Barrow-in-Furness. Be aware that the postcode may cause satnavs to direct you to the Abbey Hotel on Abbey Road. Don't do it - there is no access from the hotel to the Abbey!

Instead, take either of the turnings that flank the hotel site; Rating Lane or Abbey Approach. The English Heritage parking area is at the northern end of the site next to the museum.

There is also a public parking area at the southern end of the site beside the Abbey Mill Cafe, where a footpath leads to another English Heritage site, Bow Bridge, a 15th-century bridge built by the monks of Furness Abbey to reach an abbey mill on Mill Beck. 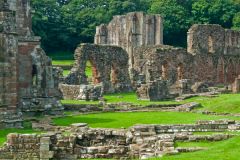 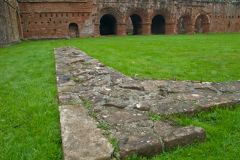 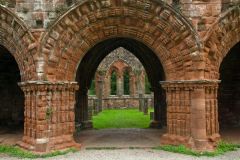 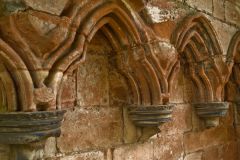 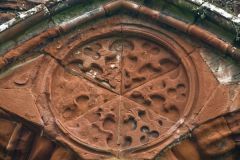 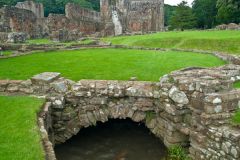 More self catering near Furness Abbey