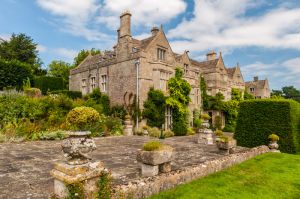 Attractive gardens dating from the 17th century overlook the Golden Valley at Misarden Park, and feature a yew topiary designed by the famous Edwardian architect and designer Sir Edwin Lutyens, as well as colourful double herbaceous borders, terraced lawns, a formal parterre, walled garden, a summerhouse and a rill garden.

The gardens are open from early spring until autumn and are set against the beautiful backdrop of Misarden Park house, a beautiful 17th-century manor, built in 1620 and owned by the Wills family since 1910 but not normally open to the public.

The location on a sloping hillside offers wonderful views over the rolling Cotswold hills. The walled garden has roses and herbaceous borders, specimen trees, and a formal parterre with a sundial at its centre. There are colourful displays of Spring flowers, with fanciful topiary acting as a backdrop. Some of the topiary figures were designed by Lutyens.

There is a summerhouse made from reclaimed stone and tiles gathered from the estate, and a lovely water feature complete with a fountain at the centre. See a mulberry tree planted in 1620, the same year the house was built, and an arboretum arranged to give glimpses of the wonderful countryside views.

Beside the garden is a popular nursery, offering hardy perennials, bedding plants, roses, and shrubs for sale.

The estate stretches to 3000 acres of beautiful Cotswold countryside, including the entire village of Miserden and its historic church. Note the curious historical anomaly of the spelling; the gardens are Misarden with an 'a', while the estate and village are Miserden, with an 'e'! 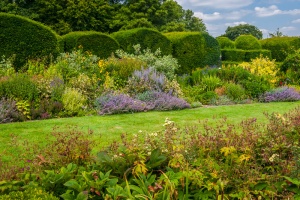 We visited Misarden on a warm summer day in early August. We found the signposting for the garden a bit confusing in the village, but eventually made our way to the entrance, beside the commercial nursery.

There was no ticket kiosk, just a box to collect a pamphlet with a map of the garden. A polite notice asked visitors to pay one of the 2 gardeners working on site. We couldn't find anyone, but I wasn't bothered as we are Historic Houses Association members and so had free entry anyway.

We carried on into the walled garden above the house, with wonderful views down a long avenue flanked by amazingly colourful herbaceous borders. The borders were beautifully arranged, with low plants nearest the turf path, rising up through taller and taller plants to clipped hedges on either side. It really is an appealing arrangement and directed our eyes down towards the rambling manor house of Cotswold stone.

Near the manor is a terrace with narrow canals, with a lovely fountain at the centre and a summerhouse at the far end. We carried on down a flight of steps to the terraced lawn below the house. Here is where the sheer scale of Misarden Park house really hits you; the manor house is huge, with gables and oriel windows facing the lawns and offering wonderful views over the valley below and deeply wooded hillsides beyond.

The garden is divided into separate areas, or rooms, but clipped hedges, and it seems that around every corner is something a little different; a different style or arrangement of plants, a different colour scheme or use of garden ornaments. Misarden represents the Cotswolds at its very, very best, a magnificent example of a historic garden in a setting that is hard to equal anywhere in Britain. 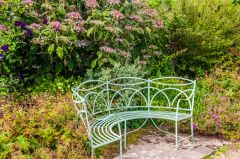 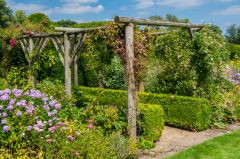 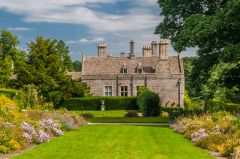 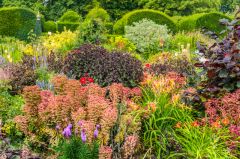 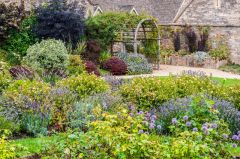