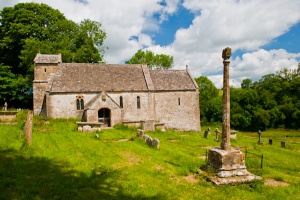 Every guidebook on historic Cotswolds churches includes the tiny church of St Michael at Duntisbourne Rouse in their top picks of places to visit. And while I may not always agree with guidebook authors, I certainly do in this case!

The church certainly dates to the Saxon period. Evidence of Saxon stonework is almost the first thing you see as you approach the church down a sloping path from the narrow lane that runs through the Dunt valley. The west wall, under the tower, shows traditional herringbone style stonework favoured by Saxon builders.

The chancel is Norman, as is the elegant chancel arch. The tower is a relative newcomer, dating to the 14th century, with a saddleback tower added in 1587. This style of tower is common in the Cotswolds, particularly the area around Cirencester. Oddly, we know exactly who built the tower, for he left his name inscribed on the tower - John Haden. 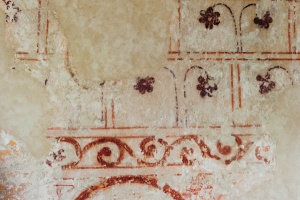 The porch, by contrast, dates from 1756, a date inscribed by the sundial. There are Norman windows in the small chancel, which is decorated with 13th-century wall paintings including arcades and flowers.

On the south side of the chance are four wooden seats with misericords. These misericords are thought to have been brought to Duntisbourne Rouse from a larger church, indeed, they seem rather rich decoration for a tiny country church. The designs are very similar and look to me like benevolent lions.

The pulpit is Jacobean, and nicely, if simply, carved. The pews are 18th century, and the font is 13th century.

As fascinating as the interior is, it is what lies beneath it that draws most people to brave the single lane road to Duntisbourne Rouse. For under the chancel, reached by a narrow set of steps that seem to drop straight into the earth, is a Norman barrel-vaulted crypt, dating to 1200. This was formerly approached from inside the church, but that access has been bricked up.

The crypt may have been used as a small chapel, added when the chancel was built to extend the church beyond the original length of the nave. One small lancet looks out over the sloping hillside down to the woods that line the river.

There are traces of paintings on the crypt walls, and a small aumbry, or cupboard, set into the north wall. The back of this aumbry is lined with a Norman gravestone. The floor is laid with two huge stone slabs, which may have been used as altar stones. 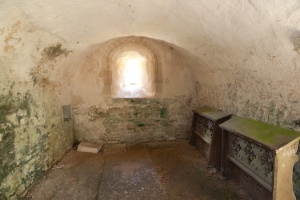 In the churchyard, to the south of the porch, is a medieval cross, possibly 12th century. It was probably used as an outdoor preaching cross; a gathering place for people to listen to outdoor sermons.

VISITING DUNTISBOURNE ROUSE CHURCH
I've visited twice, and each time I've missed the path to the church and had to find a place to turn my car around and head back - not easy to do on such a narrow road.

The best - indeed, the only - place to pull over is on the east side of the road (heading south towards Daglingworth). There is indeed a sign, though it is very easy to miss, and there is so little to the hamlet, if you can even call it that, that you may find you've passed right through it before you notice!

The term 'picture perfect' could have been invented to describe Duntisbourne Rouse. St Michael's Rouse church is one of those atmospheric places that live long in your memory after your visit. There's just something about the place that gets under your skin!

The site is idyllic, the church a delight. No wonder it was included in Simon Jenkins popular book, England's 1000 Best Churches, and was praised by architectural historian John Betjeman.

One burning question I've been unable to resolve is this; is the name of the hamlet Duntisbourne Rouse or Duntisbourne Rous (without the final 'e')? The church guide is e-less, so is the official Church of England website. Yet the Ordnance Survey map lists an 'e', as do other printed guidebooks. There seems to be no consensus, so you may see it listed either way. 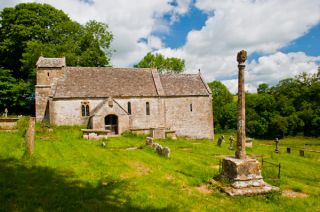 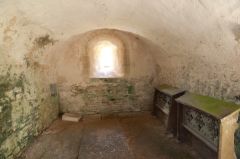 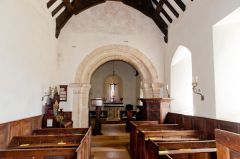 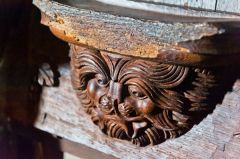 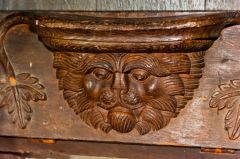 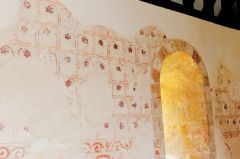 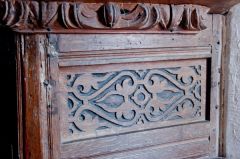 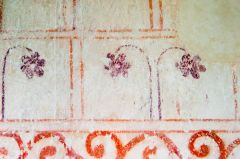 More self catering near Duntisbourne Rouse