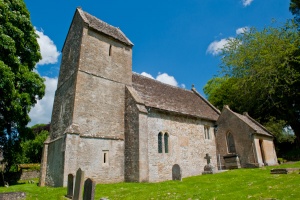 Syde is little more than a peaceful hamlet overlooking the River Frome, located off the old Roman Ermin Way between Gloucester and Cirencester. Not only is the village small, so is the parish; at just 628 acres it is one of the smallest in England.

The pretty little church of St Mary's is mostly Norman, but the presence of a Saxon lintel over the blocked south doorway tells us that the history of the site goes back long before the Normans arrived.

The Domesday Book of 1086 tells us that the estate was given to Abbot Ansfrid of Corneilles, in France. Before the end of the 11th century, Syde had passed into the hands of the Giffard family, who owned large estates in Gloucestershire and maintained a castle at Brimpsfield, just to the north. When the Giffards lost influence the estate passed to the Lords of Berkeley, who also held a powerful castle on the Severn, further south. 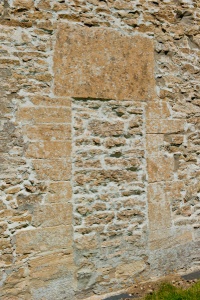 In 1334 the Berkeleys founded 4 chantry houses, with money to support priests in saying masses for the family's souls. Remains of these 14th-century chantries can be seen between Syde and Caudle Green, partway down the hillside. Next to the church is another reminder of the 14th century; a large tithe barn, where produce such as corn, sheep wool, and timber was stored for distribution to the abbeys of Gloucester and Cirencester.

Much of the church we see today is 12th century, with a 14th-century west tower in a saddleback style. The chancel and porch were heavily restored in 1850. To the west of the porch is a medieval coffin lid with a cross carved into it. 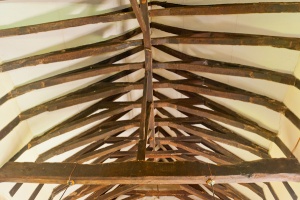 15th-century crown-post roof in the nave

The interior is wonderfully atmospheric; it is lit solely by 19th-century gas-lights. The octagonal font is 15th century, with quatrefoil carvings on each panel. It has an unusual base, consisting of 5 chamfered faces.

Also 15th century is the lovely crown-post nave roof. Over the Norman chancel arch is a very worn royal coat of arms to Charles II. In the south window is a roundel of 15th century stained glass depicting St James of Compostella. There are a wonderful array of 18th century box pews.

Syde is a lovely little church, in a picturesque Cotswold setting. There are especially outstanding architectural or historic features beyond the Saxon lintel, but it is nevertheless a delightful country church. 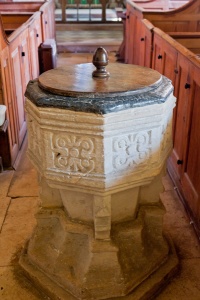 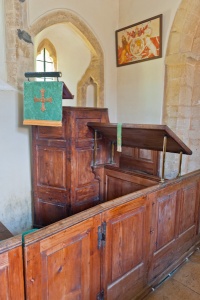 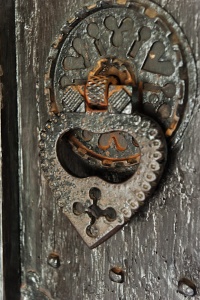 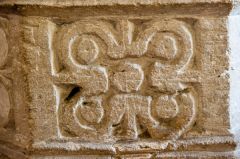 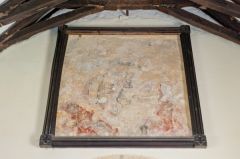 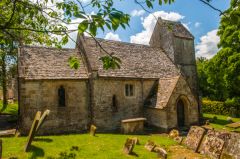