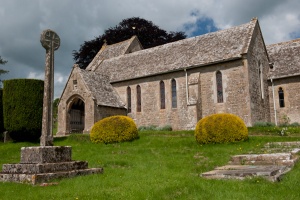 St Peter's church stands above the small village green on a sloping hillside above a small ford. There may have been a church here in the Saxon period, but the current church of St Peter was begun in the 12th century.

The oldest part of the church is the lower section of the tower, where you can clearly see a small narrow window common in the early Norman period. The top of the tower is a saddleback design, common to the area near Cirencester.

The tower arch may also be early Norman. The two-bay nave arcade is late Norman and a good example of Transitional Gothic style. The north aisle is also late Norman, with Early English windows in the west and north-east corner.

The porch is also Early English, though it was moved to its current position during a sweeping restoration in 1872. The goblet-shaped font is late Norman, with very attractive foliated decoration around a circular bowl.

Tucked into a corner is a worn stone coffin, dating to the 13th or 14th century. It was discovered built it the churchyard wall and brought inside for preservation. There is a Norman piscina in the chancel, projecting from the south window embrasure. There are good examples of Victorian stained glass throughout the church. 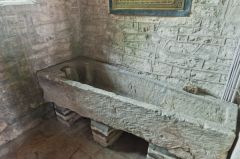 More self catering near Duntisbourne Abbots

Self Catering near Duntisbourne Abbots