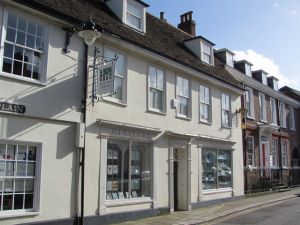 Hertford Museum
An early 17th-century townhouse with 18th-century facade houses a fascinating museum of local history. Behind the museum is a beautifully recreated Jacobean knot garden.

The roots of the Hertford Museum go back to the late 19th century when a pair of brothers began to collect items related to Hertford's long heritage. In addition to items of local interest, they convinced Hertford natives who had travelled abroad to donate artefacts from their travels. The Andrews brothers opened the museum in their own premises on Fore Street in 1903.

Today the museum holds over 80,000 objects, arranged in several broad categories, including geology, fine art, natural history, and ethnography. In addition, there are old photographs, artefacts related to the Hertfordshire Regiment, and local archaeology finds. One highlight is the Addis company archives, including the largest toothbrush collection in Britain.

The ground floor exhibits tell the story of the museum itself, the Andrews brothers, and the historic house that acts as the museum's home. The first floor concentrates on the tow and the people of Hertford, with local heritage, military history, and much more. Among more modern exhibits is a 1980s Dragon computer, and its ancient forerunner, a 1747 Nairne’s patent electrical machine.

One of the more unusual historic exhibits is a complete Roman corn drying kiln. The kiln was discovered in 1975 at Foxholes Farm. It was carefully removed and transported to the museum stores, where it can be seen on special 'Stores Open Days' or by previous appointment. The oven dates to the 4th century and operates very much like a Roman hypocaust, or underfloor heating system, with a fire warming air which passes underneath a drying floor where barley was laid. The drying process was the first step in using barley to brew beer.

There is a regular programme of events including lectures and children's events, plus temporary exhibits, and a reading room for local heritage research.

More self catering near Hertford Museum >>