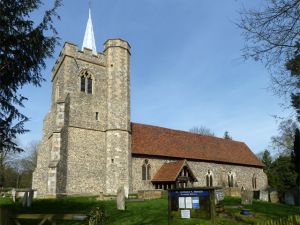 Stanstead Abbotts, St James Church
There are two churches in the village of Stanstead Abbotts. St James' is the older of the pair and served as the parish church from the 12th century until St Andrew's was built in 1882.

St James's church is a lovely building, and dates primarily to the 12th century, with additions over the next four centuries. There is a nave, small chancel, a sizeable north chapel, and south porch, with an early 15th century west tower. The church is entered through the timber-framed porch, added in the 15th century. The nave roof is 15th century, with a king-post design.

The interior features Georgian box pews and a 16th-century triple-decker pulpit. The benefice website says that the church is an excellent venue for occasional musical performances - despite the unusually high box pews! There are numerous funerary monuments and fragments of medieval glass. The font is a circular 13th-century bowl joined to a 13th-century base by a 15th-century stem.

The lower part of a 15th-century screen has been adapted to serve as the back of a nave pew. The best of the interior monuments is in the chapel, where figures of Sir Edward Baesh, died 1587, and his wife kneel facing each other in an ornate niche.

There are several interesting brasses; set into the chancel floor is the brass of William Saxaye (d. 1581), who is shown in secular costume. On the chancel wall is a late 15th-century brass showing a knight in armour. In the nave is a small mid-16th century brass of an unnamed man and woman holding hands, while nearby are two slabs with brass shields, one bearing the arms of Boteler.

St James' church is no longer in regular use and is in the care of the Churches Conservation Trust.