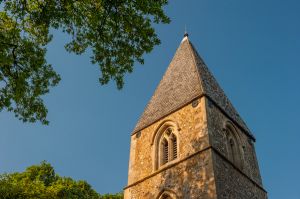 A wonderful Saxon church set near the site of the manor of Chickney Hall, and mentioned in the Domesday Book, St Mary's is one of the oldest churches in Essex. The most generally agreed date for its origins is around AD 1000, but some historians suggest a much earlier date, around AD 850.

However, there may have been much earlier pre-Christian worship on the site, as suggested by the oval shape of the churchyard, a shape often used to delineate pagan places of worship.

The nave and chancel are pre-Conquest, while the three-stage tower is a 14th-century addition, topped with a steep-sided pyramidal shingle roof. Several of the windows are Saxon, though some have been blocked up. If you look carefully at the nave you can see that it forms a parallelogram, with no right angles.

When the tower was added it was set at right-angles to the west wall, which makes it completely out of line with the chancel! Interestingly, the corners are not made with dressed quoins (corner stones), but simply use large pieces of flint rubble to form the join, a most unusual approach indeed!

The walls are built of flint and pebble, dressed with clunch and limestone. The timber roof is also 14th century, and there is a beautifully carved 15th-century font. The wooden cover that protects the font looks medieval, but it was carved in 1858 in medieval style. 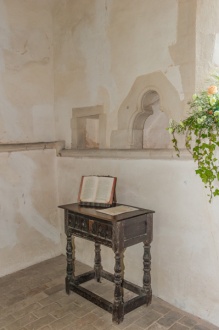 The altar table is a 13th-century slab, which was discovered under the floor of the nave in 1858. The slab - measuring 5'10" long, 3'2" wide, and 5" deep - was probably removed for safe-keeping during the height of the Reformation, when stone mensa (altar slabs) were made illegal and were supposed to be replaced by wooden communion tables.

It seems the parishioners of Chickney did not want to lose their altar, so instead of breaking it up, they carefully buried it under the chancel floor.

There it was discovered in 1858 during repairs to the church. The then rector, Robert Burgess, made a bold decision; despite the fact that stone altars were still officially illegal in Anglican churches, he had the ancient slab mounted in a wooden frame and set once more in the place of honour beneath the east window.

In so doing, Burgess risked being put on trial before a Consistory Court (an Anglican church court). However, there may have been much earlier pre-Christian worship on the site, as suggested by the oval shape of the churchyard, a shape often used to delineate pagan places of worship.

To the right of the altar table, an early 13th-century piscina is set into the wall. Near it is a simple early 17th-century communion table. There is a 13th-century squint to the north of the chancel arch allowing views of the main altar from the sides of the nave.

In the south wall, near the door, is a small Saxon window, its deeply splayed sides giving evidence to its age. Just inside the chancel is a wonderfully carved reading desk, made in 1858; the church guidebook calls this an 'elaborate Gothic Revival tour-de-force' and I'd agree with that!

The pulpit is a comparative newcomer, dating from the Georgian period and probably brought to Chickney from Terling church around 1850. On the north wall of the nave is a hatchment to a member of the Cranmer family, patrons of Chickney church for many years. The Cranmers of Chickney were descended from Archbishop Cranmer's brother John.

Though the parish of Chickney dates to before the Norman Conquest, by 1901 the population had diminished to only 20 inhabitants. That figure rose to 37 in 1931 but has not varied much in the intervening years. So it comes as no surprise that in 1972 Chickney merged with nearby Broxted and St Mary's was made redundant. It is now, thankfully, in the care of the Churches Conservation Trust and is usually open.

St Mary's is a delightful rural church, in a peaceful countryside setting. Indeed, it isn't the easiest to find; located as it is up a lane off the B1051 between Thaxted and Stansted. The furnishings are simple, with no particularly outstanding features, save perhaps the medieval altar slab, but it fits perfectly into its surroundings. The wonderfully preserved Saxon architecture makes Chickney one of the most interesting churches to visit in Essex. 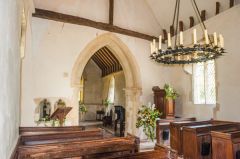 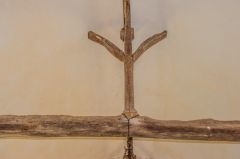 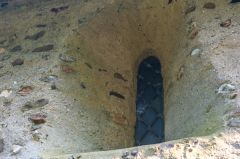