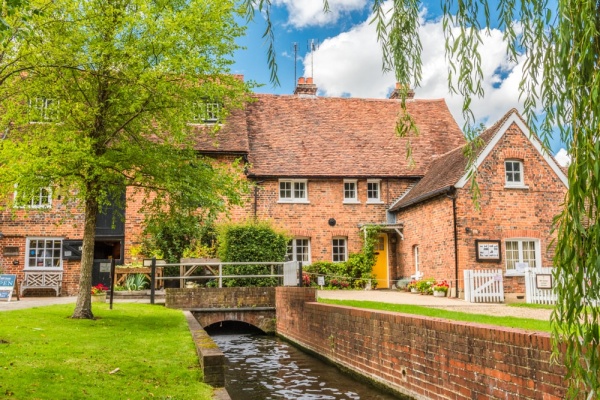 The Domesday Book of 1086 recorded four mills in Hatfield, and one stood here at Mill Green on the River Lea. It is perhaps a stretch to claim that the mill we see today is 1000 years old, but there has been milling taking place on this site for at least that long.

The four mills recorded in the Domesday Book were owned by the abbot of Ely. The Domesday Book is not clear if there were four separate mills or simply four sets of millstones. We do know that there are now four distinct mill sites within a few miles of each other along this stretch of the River Lea; at Essendon Mil, Cecil Saw Mill, Bush Hall, and Mill Green.

The Mill Green site was alternately known as Hatfield Mill, Manor Mill, and Bishop's Mill (the Bishop of Ely was also Lord of the Manor of Hatfield). 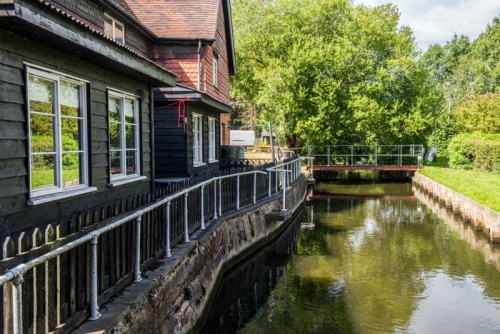 A survey performed on the Bishop's behalf in 1277 recorded 'two water mills under one roof'. Another record emerges in 1358 when Thomas Lisle, Bishop of Ely, had his estates seized by the king, and the documents show that the Bishop's Mill needed repairs.

By 1436 only one mill was working (or perhaps a single pair of stones).

Records show more than repairs to the mill; they record that at least three of the medieval millers were unsavoury characters. Manor Court Rolls from 1482 show fines to two millers for taking 'excessive tolls' (taking more than their fair share of the wheat ground as payment in kind). One of the millers returned to court two years later charged with the same offence, this time with a new partner.

The Bishops of Ely owned the mill until the Reformation at which time it became Crown property. We know little about its owners until the early 17th century when the mill passed to the wealthy Cecil family of Hatfield House. The Cecils owned Mill Green for the next 300 years.

Around the same time as the Cecil's took possession, we know that there was a fulling mill just upstream of the corn mill. The miller at Mill Green complained that the owner of the fulling mill had diverted the watercourse, thus lessening the head of water available for his corn mill. The Cecils had to intervene and decided the case in favour of Mill Green Mill. 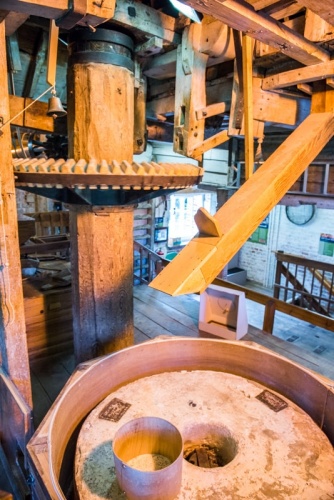 The stone floor, where flour is ground

By 1633 the mill had 3 'water grist mills' under one roof, in addition to a hop ground. The miller had the right to fish near the mill, though only for eels.

By the late 17th century the fulling mill had been converted to a paper-making mill, while Mill Green had added a brewhouse. The mill was leased by the Bigg family from 1726. The Bigg family owned or leased several mills in Hertfordshire and their tenure was the most prosperous period in the mill's long history.

Joseph Bigg later rebuilt and repaired the mill, creating the complex of buildings we see today. You can see a brick bearing his initials and the date 1762 set into the front wall. He also installed the water wheel in its present position and added the horizontal and vertical shafts. Joseph Bigg grew wealthy from his endeavours; when he died in 1767 he left over £1600 to his descendants.

Unfortunately, a subsequent Joseph Bigg gambled away the family fortune and when he died in 1824 the Bigg connection with the mill ended.

The mill was last repaired in 1824 by the Farr family, but nothing more sees to have been done for the next century until the mill stopped production in 1911.

It stood vacant for many years, falling into a state of decay until the Hatfield and District Archaeological Society stepped in and restored the building. The mill has been in full working order since 1986 and has served as the local heritage museum since 1979. 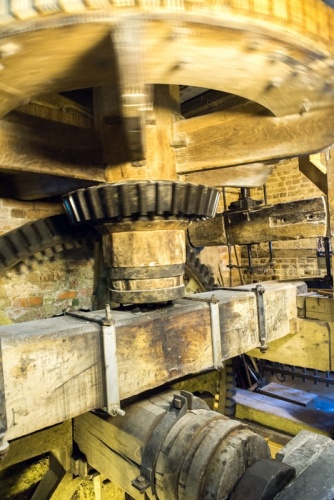 The mill employs a low breast shot wheel, with the water flow controlled by a sluice gate. The mill building is three storeys high. The top floor, or bin floor, holds large bins for storing grain and a sack hoist wheel to help raise sacks up to the storage area. The second floor is where the grain is milled and is called the stone floor. The ground floor is known as the meal floor, where the mill wheel and gearing are housed.

Visitors can watch flour being milled weekly on specified days, and even if milling is not taking place you can see the waterwheel in action. Organic flour milled on site is available in the museum shop. 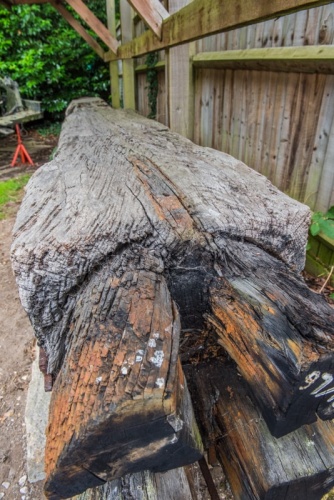 The Mill House, formerly occupied by the millers, is now home to a fascinating museum of local history covering the Welwyn Hatfield District. The museum houses three galleries with changing exhibits focussed on different aspects of local art and heritage.

You can still see the original 16th-century timber framing inside the Mill House. The space between the timbers was originally filed with wattle and daub but this was replaced by brick in the late 17th century.

When we visited there was a fascinating exhibit on the role of water in our lives and the challenges in providing clean drinking water. A more recent display looks at the role of uniforms; what we wear at work, school, and play.

You can also see a recreation of a fictional Mill Green Halt Railway Station as it might have appeared in the late Victorian period. 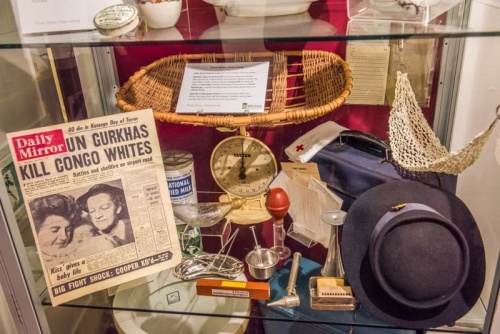 Local history exhibits in the museum

The centrepiece is a Tudor knot garden following a design by Thomas Hill designed in 1577 to represent the coat of arms of the Duke of Buckingham.

Part of the old mill buildings have been converted into a tearoom, offering cream teas that you can enjoy in the peaceful riverside setting.

Mill Green is a delightful and relaxing oasis based around a group of restored historic buildings. The site is small and will not take long to explore, but don't miss the chance to simply sit and enjoy the atmosphere. 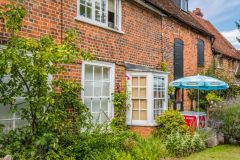 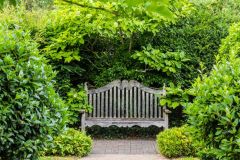 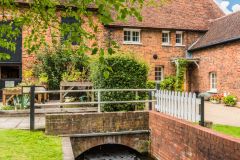