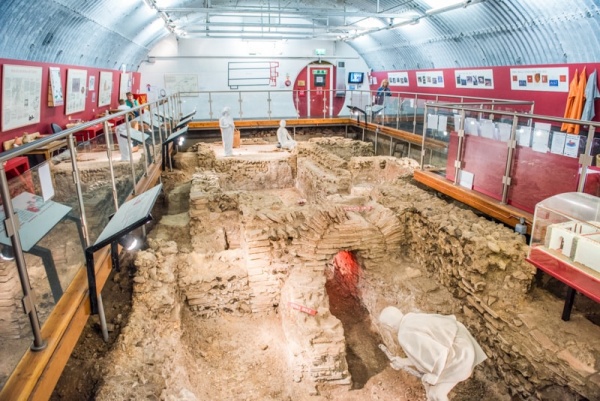 Welwyn Roman Baths is a 3rd-century bath complex that formed part of the Dicket Mead Roman villa. The baths lie directly underneath the A1(M) motorway, protected by a steel vault.

In 1960 a local archaeologist named Tony Rook saw Roman tiles protruding from the bank of the River Mimram on the edge of Welwyn village. He organised a group dig as a training exercise. That group eventually became the Welwyn Archaeological Society, and over the course of the next ten years, they uncovered the remains of a bath complex dating to the 3rd century.

As completion of the dig neared, the Ministry of Transport finalised the route of the new A1(M) motorway, and to the consternation of the archaeologists, the proposed motorway ran directly over the Roman remains. 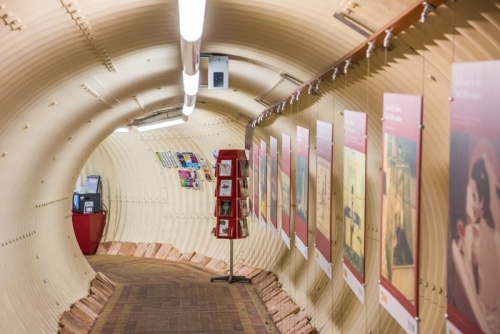 The underground tunnel to the baths

The archaeologists had to race against time to complete their excavations and come up with a plan that would protect the baths. The result was an ingenious steel vault over the baths, nine metres directly beneath the motorway. Entrance to the vault is by way of a tunnel into the bank that supports the motorway.

The bath complex is just one part of the villa, but the remainder has yet to be fully excavated. Archaeologists do know that the villa had at least four buildings. Two of these were long, parallel structures, with the baths forming one end of the southern structure. This style of rectangular building was generally used for agriculture and storage, alongside living accommodation.

Between these two buildings is the third building, probably the home of the villa's owner. It has only been partially excavated but we know it had a bath complex twice the size of the one on display. The fourth building was a small, square structure next to a canal running through the property. It may have been a cistern or a shrine to a water deity.

The Dicket Mead villa stood near major Roman roads, leading to speculation that it might have been the Roman version of a hotel, a 3rd-century motorway services, if you will.

The baths were built in the early years of the 3rd century and remained in use for about 150 years. 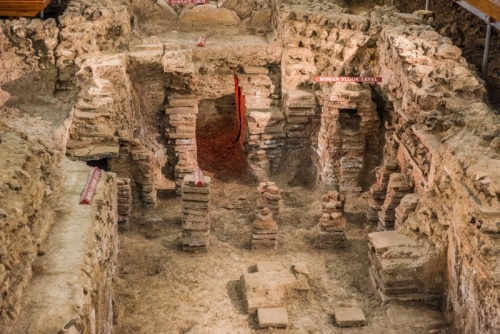 Remains of the hypocaust system

Only half of the bath complex is on display, along with an exhibition of finds uncovered during excavations. You can see the caldarium (hot room), tepidarium (warm room), and frigidarium (cold room and cold bath), along with the hypocaust system used to circulate hot air through the complex. Part of the bath complex is made of 'opus signinum', a building material formed of broken tiles mixed with mortar.

Another feature is the Praefurnium, or Stoke Hole, where charcoal or wood was stored and a slave fed the material to the furnace. Over the furnace arch was a hot tank holding water to be evaporated and to be used in the hot bath. The hot water could also be fed by pipes for use in household tasks like washing up.

You look down on the baths from a raised walkway, which is very handy as it lets you see how the bathers progressed through the complex. The process of taking a bath began in the Cold Room, which also served as a changing room.

From the Cold Room they progressed to the Warm Room, with a floor of opus signinum, heated by hot air from the furnace. Here the bather would relax, perhaps enjoy a massage, and have oil applied to their skin. They would sit in the Warm Room until they began to sweat. 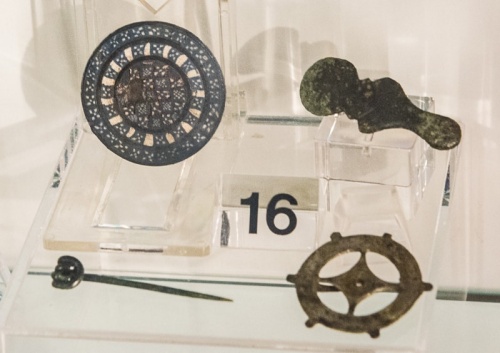 From the Warm Room, the bather went on to the Hot Room, where the temperature was much higher. Here the combination of evaporating water and the hot tank created a steamy atmosphere like a Turkish bath. The bather's sweating skin was scraped with a thin blade called a strigil to remove dirt, oil, and perspiration, then the bather would rinse off in the Hot Bath.

They would then retrace their steps through the Warm Room to the Cold Room to cool down. A dip in the Cold Bath would close the bather's pores and be a quick finish to the bathing process.

Around the outside, the vaulted chamber that houses the baths are information panels explaining the discovery of the site, the extraordinary process of saving it from destruction and creating the underground chamber. The exhibition shows how a Roman bath worked and the role that bathing played in the Roman world.

There are several display cases with finds from the archaeological investigation of Dicket Mead. Finds include construction materials, painted panels, and a fascinating ceramic figurine of a Mother Goddess nursing a baby. 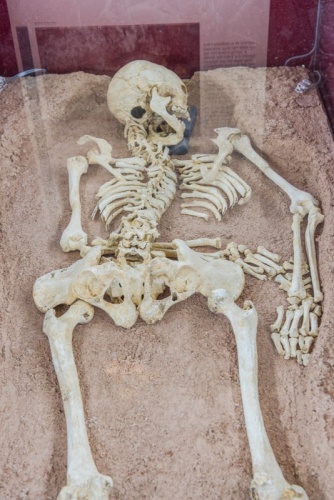 The most interesting find is the skeleton of a woman who died at Welwyn in the 1st century AD. She was between 45 and 55 at the time of her death and stood just 1.5m tall (4'11"). It is possible that she was a ritual human sacrifice, perhaps a community outcast or a foreigner.

Welwyn Roman Baths is an extraordinary historic site. Seeing the bath complex underground, and knowing that thousands of cars are whizzing by overhead, is an unforgettable experience. The baths are very well laid out with clear labelling and explanations that help explain how each part of the complex was used.

A note about getting there; we found it hard to find the site entrance as we approached from the Welwyn By-Pass roundabout from the south. We didn't see any signs and continued on to the secondary roundabout, turned around and drove back. It was only when we entered the roundabout from the north that we saw signs for the Roman Baths entrance just off the roundabout. So if you don't see the site from one direction, try again from the other! 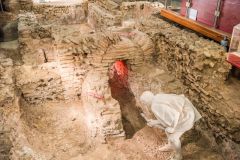 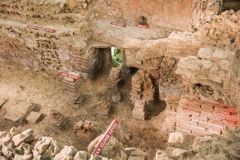 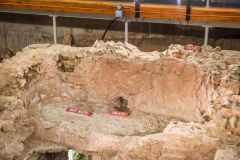 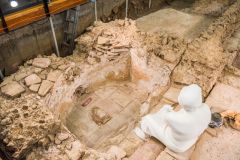 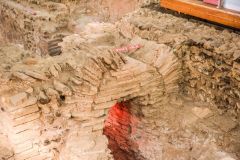 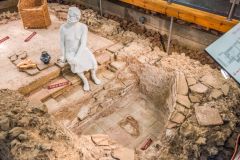