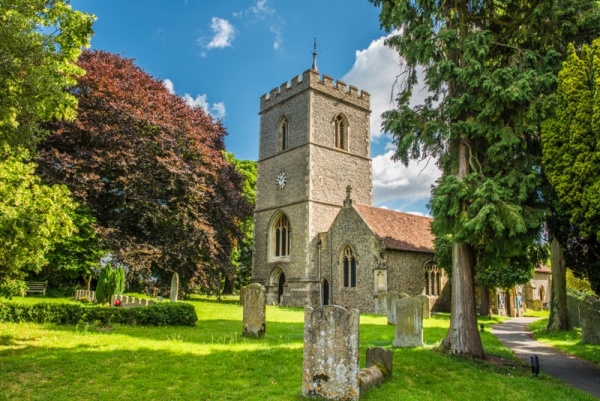 Condicote is a pretty Hertfordshire village a few miles south of Hitchin. On the northern edge of the village is the medieval parish church, dedicated to St Giles.

The earliest church we know of on this spot was built in the 12th century and was dedicated by Ralph, Bishop of Rochester, which would place it between 1108 and 1115. All that we know about that 12th-century building is that it had a chapel dedicated to the Holy Innocents.

The nave is primarily 13th-century, with the nave columns resting on octagonal 13th-century bases. The battlemented west tower is a later addition, added in the 15th century.

There is a 13th-century lancet window in the north wall of the nave. Other windows are 14th and 15th-century work. The church was heavily restored in 1853 and the south porch dates to this period. The porch protects a door with 12th-century iron scroll work.

The south chapel, also known as the Dacre Chapel, is thought to have been built in 1312. over the chapel arcade is an inscription on white marble commemorating James Bisse, who in 1736 collected as many of his ancestor's bones as he could and placed them in a family vault. 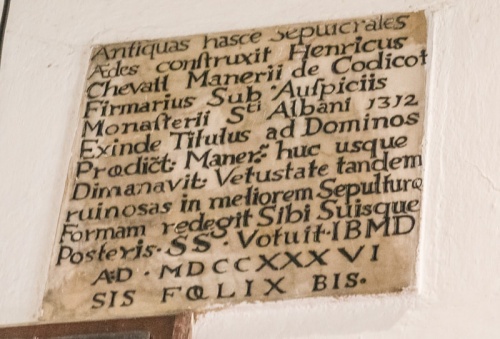 The first of the 1736 Bisse inscriptions

Most of the furnishings date to the Victorian restoration but there is a finely carved hexagonal Jacobean pulpit.

The nave and chancel are often kept locked, but when we visited the Dacre Chapel was open, and this allowed us to investigate several of the oldest memorials in the church, including the Bisse plaque mentioned earlier and a second Latin plaque erected at the same time. There is an information panel giving translations of the two plaques as follows:

Henry Chavall, framer of the Manor Of Codicot under the patronage of the Monastery of St Albans, in 1312 built these ancient sepulchral vaults. After that time the title passed on to the Lords of the aforesaid Manor until the time when James Bis, MD, wished to fulfill a vow, and brought into a better form of sepulture for himself and his posterity these vaults, which in process of time had become ruinous. A.D. 1736. Be thou happy Bis.

This underground vault was dug out more deeply below the floor, (and) James Bisse firmly bound it round with a four sided wall, who, being very much indebted to his ancestors by a chain of very dutiful rgard, collected their tremains and bones, as much soever as could be with due care found, and ordered them to be buried more deeply within. Be ye also mindful of your fate, seeing that the GATE OF LIFE EVERLASTING indeed from this moment is open. 1736. Be thou happy, Bis.

Also in the chapel is a memorial to Hugh William Reid (d 1865), a Lieutenant in the Rifle Brigade, who died at Biarritz at the age of 24. The Reid family also lost Barkly Reid, Lieutenant on the HMS James Watt, who fell from his horse and died while serving on the Isle of Candia, Malta, in 1861. The plaque was erected by the captain and officers of the HMS James Watt 'as a mark of esteem for the many good qualities by which he had attached himself to them'. Reid was just 23. 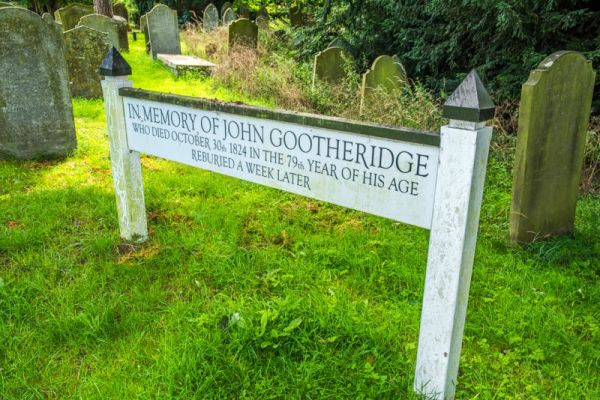 In the churchyard is a war memorial, near the site of a late 18th century poorhouse. Just off the churchyard path is a peculiar wooden grave rail, known as a 'leaping board'. The fascinating inscription reads,

'In memory of John Gootheridge, who died October 30th 1824 in the 79th year of his age. Reburied a week later'.

Why was he reburied a week after he died?

Gootheridge's 'grave rail' memorial was a common style used by poor villagers who could not afford the expense of a stone memorial.

Near the Gootheridge grave is a gravestone carved with the likeness of a coach builder's workshop, a reminder of the deceased's occupation.

St Giles Church is well away from the village centre. Our family thought we could stroll from High Street but quickly discovered that our 'stroll' had become a 15-minute walk! 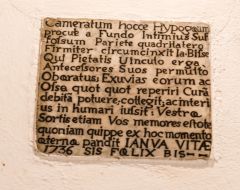