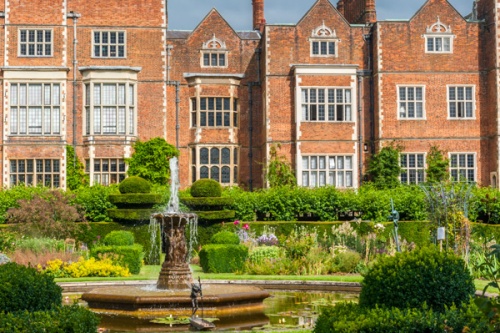 One of the great stately homes of England, Hatfield is a former Tudor royal palace acquired by Robert Cecil, chief minister to both Elizabeth I and James I. Hatfield is still home to the Cecil family, but the present house, begun in 1608, is largely Jacobean in character.

The Old Palace of Hatfield was built around 1485 and extended in 1497 by Cardinal Morton, Bishop of Ely and a close advisor to Henry VII. Bishop Morton's house was created with four wings surrounding a central courtyard. When Henry VIII dissolved the monasteries at the outset of the Reformation he seized the Bishop's palace at Hatfield and turned it into a royal palace, a place where his children could be raised.

Elizabeth I at Hatfield

Hatfield is forever linked to Elizabeth I. When she was just 3 months old Henry VIII sent the Princess to Hatfield, with her own household, and her elder sister Princess Mary as a lady-in-waiting. Elizabeth, and later her brother, Prince Edward, lived at Hatfield for much of her childhood.

When Mary took the throne Elizabeth became a virtual prisoner at Hatfield - when she wasn't an actual prisoner in the Tower of London. Though she lived a very constrained existence, Elizabeth is known to have enjoyed masques, plays, singing, and bear-baiting while living at Hatfield. 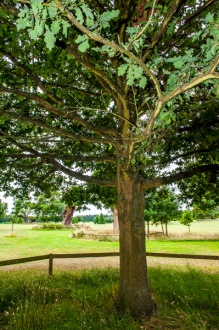 On 17 November 1558 Elizabeth was sitting under an oak tree in the park at Hatfield. According to which version of the story you prefer she was either reading a book or eating an apple when the news was brought to her that her sister Mary was dead and that she, Elizabeth, was now queen.

Elizabeth's first Council of State was held in the Great Hall of Hatfield. One of her councillors that day was William Cecil, a name which would be linked with Hatfield for generations to come.

As for the tree, it is gone, but a descendant, stands on the same spot, about a 10-minute walk from the house. It is surrounded by a low railing, but it is easy to imagine the young Princess Elizabeth seated on the ground, not knowing that her world was about to change forever.

The story of Elizabeth sitting under an oak tree has been subject to some controversy, and is not universally accepted as true. For one thing, it was November, when it would be rare for the weather to be comfortable for relaxing in the park.

In 1607 Elizabeth's successor, James VI and I, offered to exchange the royal palace at Hatfield for the Cecil family home at Theobalds. It was a wise political move not to refuse the exchange, but Robert Cecil, the 1st Earl of Salisbury and son of Elizabeth's advisor William Cecil, made the most of the trade.

In 1611 Cecil tore down three wings of the royal palace and used the bricks to build a fashionable new house beside the palace. Cecil spared no expense in creating a sumptuous home, decorated in opulent style for court gatherings and entertaining, based around a suite of state rooms hung with fine tapestries, and furnished with fine art and furniture.

The centrepiece of the new house was a grand staircase, decorated with superb carving. The design of Hatfield House is attributed to Robert Lemynge, with contributions from the Surveyor of the King’s Works, Simon Basil, and from Inigo Jones, architect of Queen's House at Greenwich. 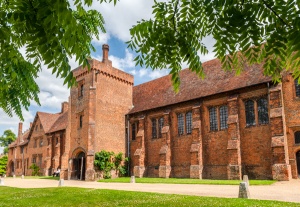 Robert Cecil lived just long enough to see his new house completed, but died the following year and was buried at Hatfield. The house, however, with its elegant gardens, are still in Cecil hands.

Within the house there is so much to see that we'll just pick out a few highlights:

The showpiece room is the Marble Hall, which looks much as Robert Cecil would have seen it, with its striking floor made of alternating squares of black and white marble.

Also in the Marble Hall is the 'Rainbow Portrait' of Elizabeth I, which faces the entrance. This colourful portrait is full of symbology and shows Elizabeth holding a rainbow in one hand.

Then there is the Long Gallery, running the full width of the south front, and stretching 170 feet. In the gallery are a hat, stockings, and gloves belonging to Queen Elizabeth I. The silk stockings are thought to be the first pair in England. 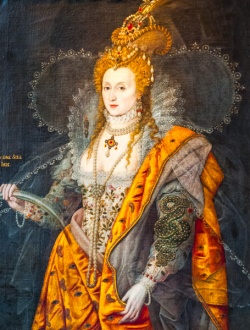 The Rainbow Portrait
in the Marble Hall

The richly decorated Chinese Bedroom is a delight. It originally formed part of a set of rooms designed for King James I, on the assumption that the king and his court would be regular visitors to Hatfield. The room was redecorated in the early 19th century with hand-painted Chinese wallpaper, and bed-hangings of yellow silk damask.

In contrast to the opulence of the 1611 house, the remains of the Old Palace offer a glimpse into late medieval life. The Palace features superb brickwork and retains most of the original roof timbers installed in 1485. Visitors can mount a set of external stairs to a small chamber overlooking the Hall, for a wonderful view of the huge chamber.

The house is not the only historic attraction at Hatfield; the gardens are among the earliest - and most historically important - gardens in England. There are 42 acres of gardens, first laid out in the 17th century by John Tradescant the Elder. Robert Cecil sent Tradescant around the world to discover and bring back new and unusual plants.

Highlights include a mini-maze of box in the Old Palace Garden, a woodland garden, and a Sundial Garden created to mark Hatfield's 400th anniversary. The East Garden is an elegant space made of parterres, topiary and rare plants. It is designed to be seen from the first floor of the house, and is open only one day per week.

We loved visiting Hatfield. There is a lot to see, and I recommend taking one of the brief guided tours that includes the Old Royal palace. Though I was most interested in the house itself, the gardens were an absolute delight, with wonderful topiary and colourful garden rooms with attractive water features and sculpture. And of course, if you are interested in history you simply must walk into the park and see Queen Elizabeth's Oak!

Garden: Originally planted by John Tradescant the Elder to a design by Robert Cecil. Huge double anemone, knot gardens, wilderness and scented gardens. Best in: times when the private East garden is open, as it contains many varieties of rare plants. 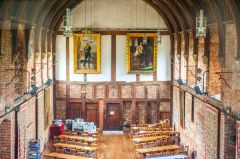 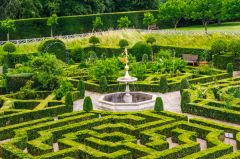 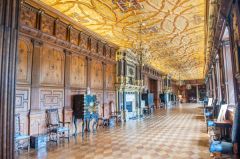 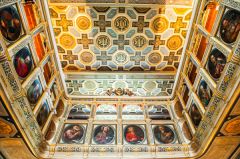 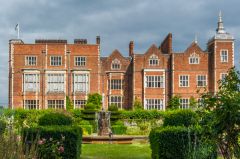 More self catering near Hatfield House >>