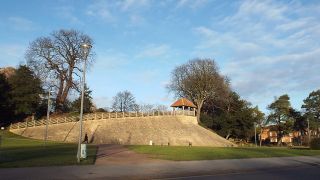 Bedford Castle
Bedford Castle, little more than an unrecognizable mound today, was first built as a motte in the 11th century, and later a shell keep was added, to be followed by a round tower with curtain walls. The castle acted as an important administrative centre, and several Sheriffs of Buckinghamshire - yes, Buckinghamshire, not Bedfordshire - used it as their official seat.

Bedford Castle is a motte and bailey castle built by Henry I in a position overlooking the River Great Ouse. To create space for the castle and its bailey enclosure Henry's men had to destroy some of the existing Saxon buildings. The original castle consisted of just the motte and an inner bailey.

Just as the squabble broke out, King David of Scotland marched south to invade, in support of Stephen's rival to the throne, Empress Matilda. Despite the fact that Miles de Beauchamp came out in support of King Stephen, the king decided to capture Bedford Castle by force as he marched north to meet the Scots in battle.

Miles de Beauchamp garrisoned the castle against him, but rather than launch a siege, King Stephen left a token force outside the castle to starve the defenders into submission and continued his march north.

After 5 weeks the defenders accepted a deal to surrender and hand the castle over to the king's men, while De Beauchamp retained his lands around Bedford. Miles de Beauchamp returned in 1141 and retook the castle, and switched allegiance to support Matilda. Henry II marched through Bedford in 1153 but it isn't clear whether he besieged the castle or left it alone.

A later De Beauchamp, William by name, supported the crown in the Barons' Rebellion of 1215 and withstood an attack by the rebel forces. He later switched to the Baron's side, and in 1216 the castle was besieged and captured by Falkes de Breaute on John's behalf. When Henry III took the throne Falkes made Bedford Castle his power base and extended the defences. He even destroyed two nearby churches to make space for a new outer bailey enclosure.

The stone from the church was used to strengthen the castle defences. Falkes' 13th-century castle had stone-lined ditches and earthworks, a barbican to control the main entrance, and a new stone-built keep atop the castle mound. Within the inner bailey was a great hall; the centre of castle life.

Falkes de Breaute fell out with Henry III, and the king marched on Bedford. Falkes had left the castle in the hands of his brother William, with a garrison of 80 men. The king's army battered the castle with stones fired by siege-engines and attacked the walls without success for 8 weeks.

Losses to the king's men were heavy, but after miners built a tunnel under the keep the castle finally fell. All but three of the garrison were hanged, and the others only escaped by agreeing to join the order of the Knights Templar. Tragically, a letter from the Pope asking Henry to cease his attack arrived just 3 days after the castle fell.

Henry III ordered the castle to be torn down and the ditches filled in. Stone from the castle was used to pave streets in Bedford town, and to build the first stone bridge across the Great Ouse in the town. William de Beauchamp eventually returned and built a house inside the inner bailey.

The castle was left derelict, though it was refortified by Prince Rupert in the Civil War. The castle mound was modified several times. In the 16th century, the flat surface on top of the mound was used as a bowling green. In the 19th century, an ice-house tunnel was built into the northern side of the mound. The interior storage area is over 4 metres deep, enough to hold ice for every inn in Bedford.

The area once used as the castle bailey is now occupied by car parks on Castle Lane. An archaeological park was erected on part of the castle site, incorporating one of the original castle lime kilns and the partial foundations of a medieval hall.

More self catering near Bedford Castle >>