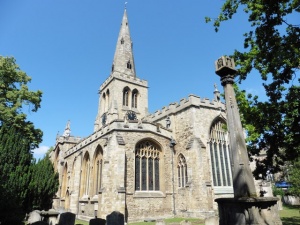 St. Paul's is a "hall church" in Perpendicular Gothic style and an intriguing mix of modern and medieval. Some of the church fabric originated with Newnham Abbey (c 1165). The spire is 18th century, replacing the original 14th-century structure, and sits atop a crenellated crossing tower.

A hall church is a church whose aisles rise to the same height as the nave, creating a long, wide, open interior space.

The choir and sanctuary may also date to the 13th century, but the choir fittings are clever late Victorian restorations incorporating bits and pieces of older wood. The misericords and armrests are nicely carved.

Pride of place in the church interior must, however, go to the memorial for Simon de Beauchamp (1208), founder of Newnham Priory. The tomb lies just south of the altar. Look for the place where a funerary brass originally graced the tomb. It is gone now but had it remained in place it would have been the oldest in Britain.

On the south side of the choir are more notably monuments. That of Sir William Harpur (1573) shows the former Lord Mayor of London with his mayoral robes covering a suit of armour.

Both John Bunyan and John Wesley preached from the stone pulpit by the northwest tower arch. The rood screen is a wonderful piece of early 20th century carving in the Gothic style, and the font combines a medieval base with a Victorian basin.