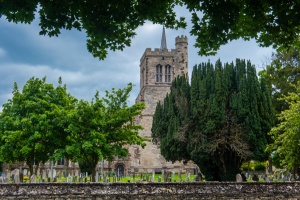 The name "Elstow" derives from "Helen Stow" or St. Helena's stockade. The St. Helena in question was the mother of Emperor Constantine and patron saint of a nunnery founded here in 1075 by Judith, niece of William the Conqueror.

William gave the holding of Elstow to Judith, who founded the nunnery and endowed it with the revenue from the village. Henry II granted the nuns of Elstow the right to hold a fair, which became so popular in the region that respectable Bedford merchants assaulted Bedfordites on their way to Elstow!

The convent church was begun sometime in the 12th century and an elaborate facade was added in the 13th century - though it was never completed. What we see today is only a part of the original abbey church.

At the height of its wealth in the 14th century the nunnery church was twice its current size. Like other monastic institutions, Elstow Abbey was dissolved at the Reformation by Henry VIII.

At the time it was dissolved, Elstow was assessed with an income of £280 per year, making it the 8th wealthiest nunnery in England. After the abbey was dissolved, a truncated part of the nunnery church was put to use as the parish church. Most of the church interior is Norman, with the exception of two 13th century bays at the west end. In the nave the early Norman tympanum and chevron carvings survive from Judith's time. Among the interesting memorials is one to Sir Humphrey Radclyff (d. 1566) and his wife Dame Isabel (d. 1594) near the high altar.

The church is unusual in maintaining a campanile, or detached bell tower, which was erected after the nunnery tower was demolished. The bell tower makes an appearance in The Pilgrim's Progress, written by John Bunyan, a native of Elstow.

Bunyan is said to have delighted in listening to the 5 bells which still ring out from the tower, and the seat that he used while attending services is still proudly displayed to visitors.

He was baptised in the abbey font in 1628, followed later by his daughters Mary (in 1650) and Elizabeth (in 1654). As a child Bunyan used to play on the wide village green outside the churchyard wall, where the stump of a medieval market cross now stands. 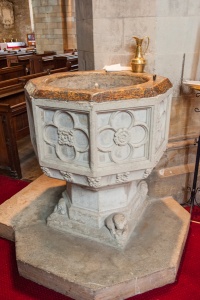 The Perpendicular font.
Bunyan was baptised
here in 1628

In the south aisle, also known as the Bunyan Chapel, is a very large stained glass window depicting scenes from The Pilgrim's Progress while a matching window in the north aisle shows scenes from The Holy War, also by Bunyan.

In the south aisle are a pair of memorial brasses. One depicts Abbess Elizabeth Hervey (d. 1527). This is one of only two brasses in England showing an abbess with her crozier. The other brass is Abbess Hervey's grandmother, Dame Margery, who died in 1427.

The other major feature of historic interest inside the church is the vestry, located in the south wesrt corner. This remarkable chamber dates from the 13th century, with a lovely stone-vaulted roof supported on a central pillar, like a cathedral chapter house. This chamber was originally a cellar, or perhaps a small parlour for the Abbess of Elstow. 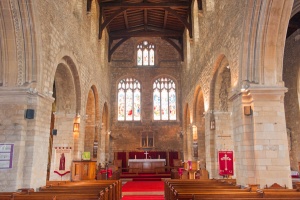 I've already mentioned the detached tower, but there are several other interesting things to look for outside the church. Facing the tower, set in the north wall of the church is an exact replica of the original Norman doorway. While the doorway is late Victorian, it has a Norman tympanum dated to 11th century.

The tympanum carving shows Christ giving a blessing, flanked by St Peter and St John. A small blocked doorway just opposite the tower has a piece of its original medieval door. This is traditionally said to be Bunyan's 'Wicket Gate', used by Christian.

In the early 17th century the abbey buildings were lying in ruins, and the lord of Elstow, Thomas Hillersdon, used the stone to build a manor house to the south west of the church. That house itself is now in ruins, but there is a very nicely carved Elizabethan entrance arch still standing amid crumbling walls.

The abbey at one time owned Elstow Moot Hall, which was used as a storage place for the annual May Fair and a court for disputes arising from the fair. 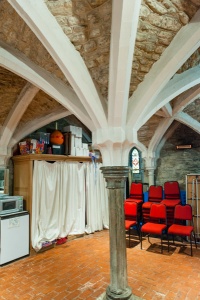 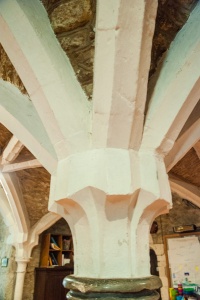 Detail of the vestry vaulting 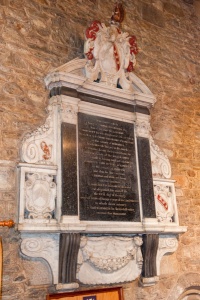 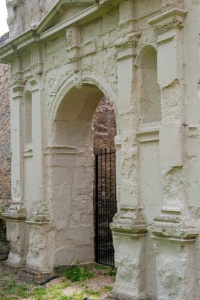 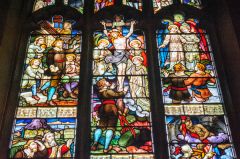 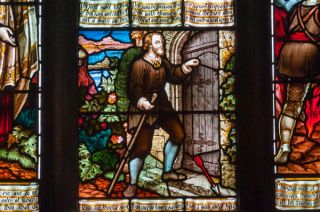 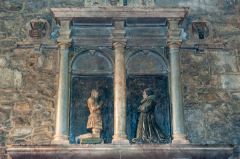 More self catering near Elstow

More bed and breakfasts near Elstow