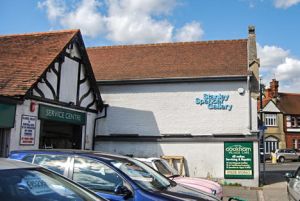 Stanley Spencer Gallery
Located in the village where Sir Stanley Spencer (1891-1959) was born and lived most of his life, this small museum is devoted to the life and works of Spencer and also has regular exhibits of contemporary art.

Spencer was born at Fernlea on the High Street in Cookham, in a house built by his grandfather. His father William was a music teacher, and Stanley was raised in an environment full of music, art, and literature. Stanley attended a family-run school, with an emphasis on the Bible, nature, and music. Long walks in nature were part of Stanley's education, and the themes of religion, the natural world, and the Cookham area recur throughout his work.

He studied at the Slade School of Fine Art in London and enjoyed some success before the outbreak of war in 1914. He enlisted in the medical corps, but later served in the infantry and fought in the trenches in France. One of Spencer's most enduring works was the Sandham Memorial Chapel at Burghclere, inspired by Spencer's own experiences during WWI.

After the war, Spencer's artistic career flourished, though his private life was tumultuous, with two failed marriages. He returned again and again to Cookham and was often seen pushing a pram loaded with his painting equipment.

Stanley Spencer was almost synonymous with Cookham; he loved the area and used it as inspiration for his greatest works of art. A new 'Cookham Walk' booklet allows visitors to follow in Spencer's footsteps and find some of the nearby locations where Spencer worked on his paintings and the views that inspired him.

The museum opened in 1962, just 3 after Spencer's death, and holds a huge collection of Spencer's sketches, drawings, paintings, and lithographs, as well as mementoes tracing his life and his ties to Cookham.