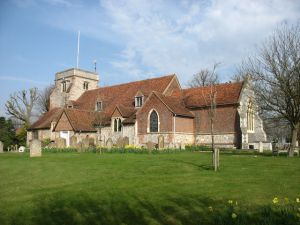 Penn, Holy Trinity Church
A wonderfully atmospheric village church with a wealth of historic interest, Holy Trinity dates to at least the 12th century. The church is composed of a nave, south aisle, chancel, and a stubby west tower. The church is built of a combination of rough-cast, flint, brick, and cement.

The best feature of the interior is a rare 15th-century Doom painting, painted in oil on oak boards rather than directly on the wall. It seems likely that the Doom was painted on boards to fit above the rood screen, below the chancel arch.

No sooner was it in place than it was taken down, cut into sections, and repainted with a crude scene of Christ in Glory, and set up over the chancel arch. In 1938 the original 15th century Doom was discovered. This is thought to be one of only south or five such Doom paintings on boards to survive in England.

Another feature of note are monuments to the six grandsons of William Penn, founder of Pennsylvania colony in America. Most of the Penn monuments are located in the south chapel, which houses 4 memorial brasses. Among these, the oldest is that of Elizabeth Rok (d. 1540).

Also in the interior is a pulpit brought to Holy Trinity from the Curzon Street Chapel. The Curzons were responsible for rebuilding the church in 1733 and many of the furnishings date to this period. The nave roof is a very fine 15th-century queen-post example.

The font is 17th century, set upon a 12th-century stem of Purbeck marble. In the aisle is a much worn 13th-century stone coffin carved with a cross.