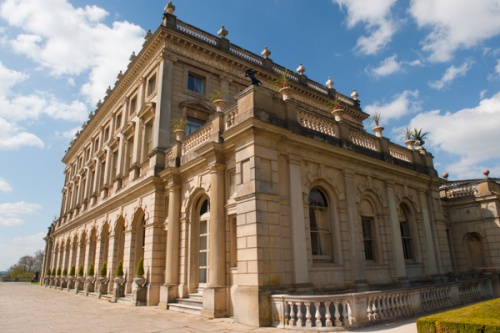 One of the great country houses of Buckinghamshire, and indeed, of all England. Cliveden stands on a high cliff above the River Thames, and the gardens provide wonderful views down the river.

In 1666 George Villiers, 2nd Duke of Buckingham, purchased the Cliveden estate from the Manfield family. He was attracted to the site by the views, which reminded him of Mediterranean scenes he had encountered while accompanying Charles II in exile.

In 1670 he called upon architect William Winde to design a new house on a terrace with views down the river. Except that there wasn't a terrace. Yet.

But the Duke was not one to be bothered by such details as landscape. He had the hilltop site levelled to create a terrace large enough to accommodate his new house and parterre gardens. The house was intended, not as a grand stately home, but as a hunting lodge, a place to escape from court life, entertain friends, and bring mistresses. 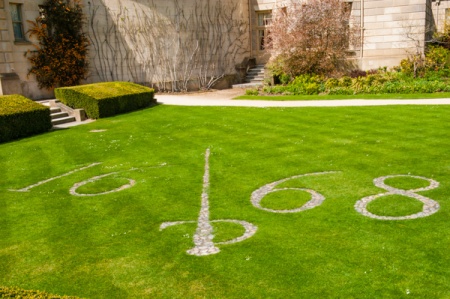 One of those mistresses was the Countess of Shrewsbury. In 1668 Buckingham and the Earl of Shrewsbury fought a duel over the Duke's affair with the Countess. The Earl was wounded and later died from his injuries. Buckingham proudly had the garden terrace beside his new house laid with stones in the shape of a sword and the date of the duel. Any visitor to Cliveden would be forcibly reminded of the Duke's prowess.

In 1696 the Earl of Orkney purchased Cliveden. His wife was Elizabeth Villiers, cousin of the Duke. Then in 1737 Frederick, Prince of Wales, leased the estate from the 4th Earl of Inchiquin and his wife Anne, Countess of Orkney. As part of the lease, the Earl and Countess moved to Taplow Court, which was then part of the Cliveden estate. But just 14 years later the Prince died and the Earl and Countess moved back to Cliveden. 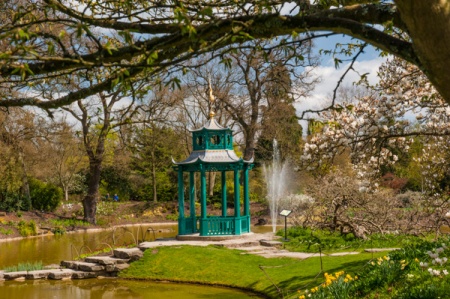 The house was badly damaged by a disastrous fire in 1795, which left only the wings standing. Nothing was done to repair the house and it was left to moulder for 30 years. In 1824 Sir George Warrender called in architect William Burn to rebuild the main block of the mansion.

Warrender entertained many of the leading political figures of the day at his new house, among them Prime Minister George Canning. Canning often sat under an oak tree looking out over the Thames, and this tree became known, not unnaturally, as Cannings Oak.

Warrender brought in Comte Alfred d'Orsay to design the parterre garden that is one of Cliveden's most appealing features, then in 1849, the Duke of Sutherland purchased the house for his wife, paying 30,000 pounds, an enormous sum at the time.

Luckily they were away from home when another fire broke out. in the library. The blaze was so strong that Queen Victoria, a good friend of the Duchess, noticed the smoke from Windsor Castle and sent the royal fire engines to help battle the fire. Unfortunately, they were too late and much of the original house was lost. 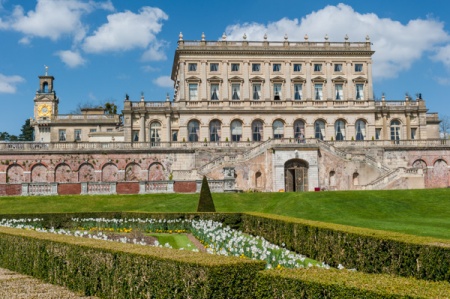 The house and Parterre Garden

Blame for the blaze was assigned to poor workmanship on the previous rebuild, and architect Sir Charles Barry was called on to oversee a new Italianate building for the Duke and Duchess.

Barry's three-storey central block curves outward to join 18th-century wings designed by Thomas Archer. The interior was altered in the 1870s from Barry's design, and an ornate clock tower and stable block added in 1861. The water tower is one of Cliveden's most striking features; designed by Henry Clutton and topped by a sculpture of the Spirit of Liberty.

In 1893 the estate was purchased by William Waldorf Astor, and the interior was remodelled yet again, to set off Astor's fine furniture and tapestries. In 1897 another of Cliveden's treasures, the Fountain of Love, was created, designed by Thomas Story from volcanic rock and marble. 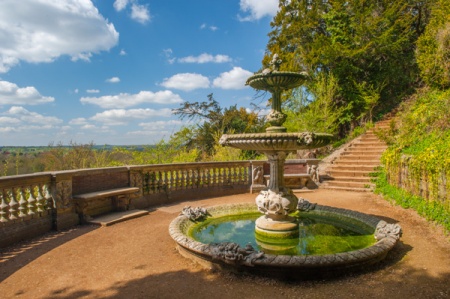 During WWI the house and grounds were used as a Red Cross hospital, then between the two world wars Cliveden was at the centre of political and social activity, and the 2nd Viscount Astor and Nancy, Lady Astor made Cliveden a popular gathering place for influential people who became known as "the Cliveden set". In 1942 Viscount Astor gave Cliveden to the National Trust. The house eventually became a luxury hotel, though several rooms can be viewed at specified times.

In recent history, Cliveden has been involved in several episodes that made the news. In 1961 politician John Profumo met Christine Keeler here, and their affair would launch one of Britain's most newsworthy scandals. In 1965 the Beatles used Cliveden as a setting for scenes in their film Help. The band famously held foot races with the film crew on the parterre between takes in the filming. 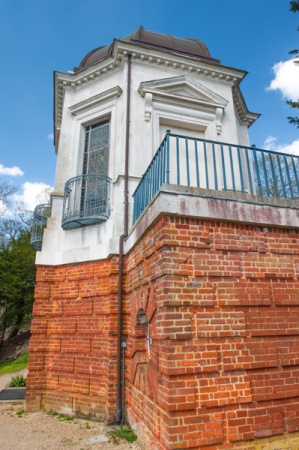 One of the largest areas is a Water Garden, centred around an Oriental temple. Near the water garden is a hedge maze - always popular with younger visitors! The grounds are also notable for their delightful statuary, with the most prominent feature being the sculpted "Fountain of Love", which stands at the end of a broad entry avenue at the main approach to the house.

From there a path leads to the Long Garden, planted with thousands of daffodils in season. It is an amazing sight; a sea of yellow and red! In a sea of trees closer to the house is a secret garden, and from there, paths lead along the Thames to a small War Memorial Garden. Beside the memorial garden is a striking monument known as the Octagon Temple (the Chapel). From the Chapel, there are wonderful views across the Thames.

From here a trail leads down 162 steps to one of the most wonderful little riverside spots you can imagine; the Tortoise Fountain, rising like a mushroom from the wooded hillside, with utterly magical views along the river. It is almost worth coming to Cliveden just for the Tortoise Fountain! 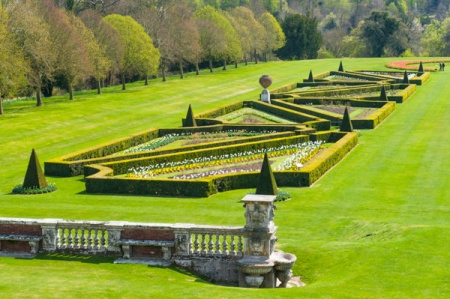 If you are feeling energetic you can descend to the riverside boathouse, where boats can be hired for trips along the Thames. If you don't fancy a boat trip you can follow trails along the hillside to a stand of giant sequoia trees, and a viewpoint known as the Duke's Seat.

Perhaps the most popular garden area, and certainly the easiest to access, is the exceptionally large Parterre, with parallel areas of colourful flowers set off by hedges. At the far end of the Parterre, facing the house, is a striking classical monument, providing a punctuation mark to the garden vista. And it is indeed a vista; Cliveden has been ranked among the top 10 British gardens; it is a remarkable place, a mixture of formal and informal, in a magnificent riverside setting.

Parts of the gardens date back to the 16th century, though most are of more recent vintage, and much of the statuary was added by the Astors.

The house itself is now run as a hotel, and only three rooms are open to the public, but the gardens are maintained by the National Trust. There is also a full programme of events at Cliveden, including open-air theatre and children’s theatre held throughout the season. 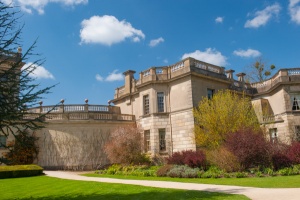 Approach to the Duke's Garden 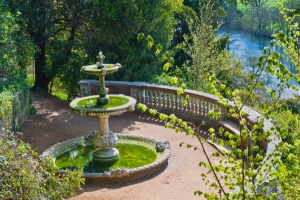 The Tortoise Fountain and the Thames 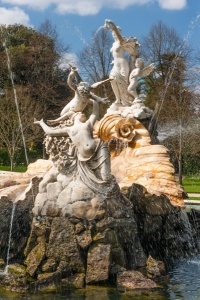 The Fountain of Love 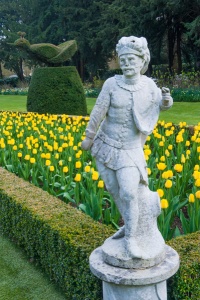 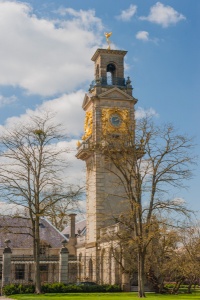 More self catering near Cliveden

More bed and breakfasts near Cliveden