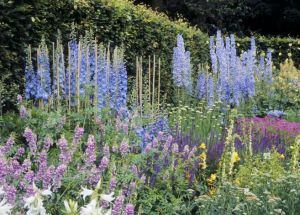 Dorneywood Garden
Dorneywood Garden is a combination cottage and kitchen garden in 1930s style, set around an 18th-century house. The garden features a lily pond, a stylish conservatory, a rose garden, and herbaceous borders.

In 1910 the house was badly damaged by fire. It was rebuilt and the gardens laid out in 1942. There are 215 acres (87ha) of garden, parkland, woods, and farmland. In the past, the house was closed to visitors but in recent years there has been a limited opening period in the summer.

The garden is open on specific dates from April-September, and as of this writing, the house itself is open for 2 weeks in July. Places for house admission are limited and advanced booking is highly recommended. Advanced booking is also necessary for garden admission. Please see the National Trust website for details.

Dorneywood House is an official government residence, reserved for a Minister of the Crown or the Secretary of State. As such, it is not open to the public. It was bequeathed to the National Trust by Lord Courtauld-Thomson in 1942 on the provision that it be used by the current Prime Minister or a senior cabinet minister.

Several well-known Prime Ministers have occupied Dorneywood before becoming PM. Among these are John Major, Anthony Eden, and Alec Douglas-Home. Eden disliked the house, but Douglas-Home was reluctant to leave Dorneywood for Chequers, the official residence of the Prime Minister, when he was elected PM.

The house interior boasts paintings from the government's own collection of art as well as paintings owned by the National Trust.

Since 1954 the estate has been managed by the Dorneywood Trust, though currently the garden and house opening are administered by the National Trust.

More self catering near Dorneywood Garden >>