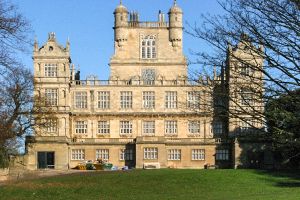 The Hall was begun in 1580 for Sir Francis Willoughby, probably by Robert Smythson, who also worked on nearby Hardwick Hall. Smythson may have been inspired by the design of Mount Edgcumbe in Cornwall. No expense was spared, and masons working on the house may have come from as far away as Italy. The Italian connection explains the rather odd series of rings for mooring gondolas affixed to the Hall's exterior walls.

The result of Smythson's efforts is one of the finest examples of English Renaissance architecture in Britain. The interior was remodelled after a fire in 1642 and again in the early 19th century, but the exterior remains essentially as it would have looked when it was finished in 1588.

One of the most interesting historic features is a 17th-century pipe organ in the main hall gallery, which has to be worked by hand. The ceiling of this chamber boasts paintings attributed to Antonio Verrio. Above the hall is a Prospect Room, reached by a slender spiral stair and designed to give broad views over the surrounding parkland. One of the most unusual features is a well with a reservoir tank apparently used by a hardy Willoughby for a daily bath.

The Tudor kitchens have been restored to their original condition and furnished following a written inventory of 1601. Then there's the Dining Room, showing how it looked after it was restored by Sir Jeffry Wyatville for the 6th Lord Middleton in the early 19th century. The Regency Salon has been restored to the way it looked in 1832.

The Willougby family resided at Wollaton until the late 19th century before letting it to a series of tenants. By 1881 the house stood empty before it was purchased by the Nottingham City Council as a venue for the Nottingham Natural History Museum.

The beautiful Tudor house is the setting for an excellent museum featuring displays of botany, zoology, and geology, plus the "World of Wildlife" recreation of an African watering hole scene. The building is surrounded by an extensive (500 acres) deer park and gardens.

The museum features just some of the over 750,000 items in the city's collection. The exhibits are divided into several main galleries, or themes, including Insects, Minerals, and Birds.

The Natural Connections gallery explores the links between humans and the natural world around us. One of the themes in this gallery is extinct and endangered species, such as the passenger pigeon, Humboldt penguin, and duck-billed platypus.

The Bird Gallery is interesting because it has intentionally been created to mimic the style of a 1930s museum, with displays of taxidermy and birds collected in Africa by the Victorian explorer Mansfield Parkyns, a native of Nottinghamshire.

And speaking of Africa, there's a special gallery featuring African wildlife, including the cheetah and gorilla. This gallery has a striking recreation of an African waterhole, with a wide variety of animals gathered to drink.

The parklands at Wollaton have been developed as a public green space. Formal gardens include a wonderful spring display of polyanthus, and ornamental cabbages. Avenues of lime trees connect the garden to the surrounding deer park.

Museum: A historic 16th-century house holds the natural history collections for the city of Nottingham, with a vast collection of animals, birds, minerals and insects, with an excellent display on extinct and almost-extinct species.

More self catering near Wollaton Hall and Natural History Museum >>