HERITAGE HIGHLIGHTS:   One of the 3 medieval churches of Nottingham 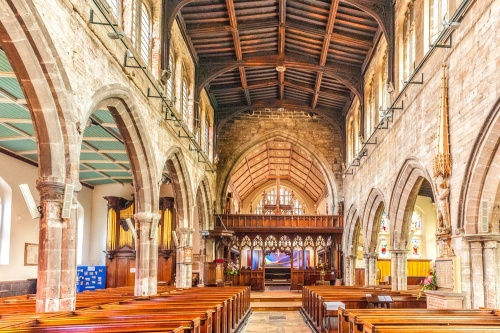 St Peter's Church is one of Nottingham's three medieval churches (the others being St Nicholas and St Mary, the oldest). It was founded after the Norman Conquest, probably in the last few years of the 11th century, to serve the French Borough, the new settlement that grew up between the newly-built Norman castle and the original Saxon settlement. The first church was poorly sited on a marsh near Rowell Brook (where St Peter's Square is now).

The church was the scene of a dreadful massacre in 1140 during the Anarchy, the Civil War between supporters of King Stephen and Queen Maud. The king held Nottingham Castle, and Queen Maud's army launched an attack the parishioners fled to St Peter's Church for safety. It proved to be a fatal decision, for the army sacked Nottingham and massacred all those gathered inside the church. Trouble struck again in 1153 when the town was destroyed by fire and the church was badly damaged once again. 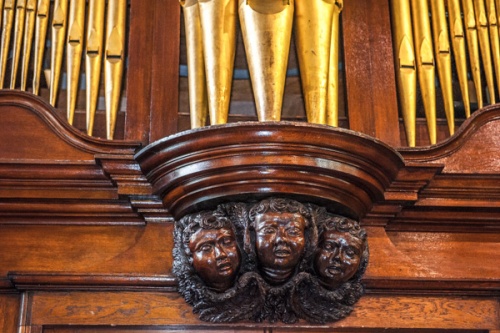 Cherubs on the 1770 organ case

The church was rebuilt between 1180 and 1220, giving us the beautiful building we see today. The tower and spire were added in the middle of the 14th century. A north aisle was added later that century, though the north arcade was rather oddly built inside the north wall of the nave, giving the church a curious, lopsided appearance.

Interior features include a simple three-seat sedilia in the chancel, a Victorian chancel screen and a painted royal coat of arms to William IV. In the south aisle is a font with a 15th-century base supporting a 17th-century bowl. The wooden cover was carved by the famous Robert Thompson workshop of Kilburn, Yorkshire. Look for Thompson's trademark mouse symbol. The organ case dates to 1770 and was originally used in York Minster. It was brought here after the Minster was damaged by fire in 1812.

Memorials include a peculiar pair of wall tablets in the north chancel to the two wives of John Locke, Margaret Saunders (d. 1633) and Jane Ellis (d. 1637). The tablets are in completely different styles, yet were made within a few years of each other. They are carved from black alabaster and are the oldest and most magnificent memorials in the church. Also on the north wall of the chancel is a brass plaque to Elizabeth Martin (d. 1779) and another brass to her husband, Rev Samuel Martin, the rector of St Peter's, who died a few years later in 1782. 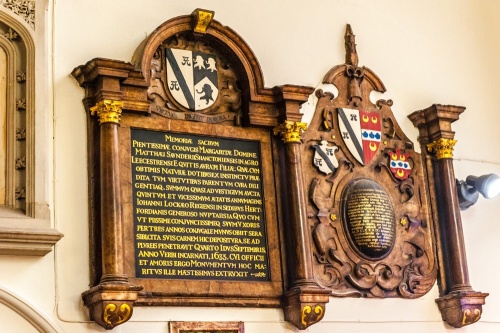 On the south wall is a memorial of grey marble and gold to Rev John Abson (d. 1749) and his wife Anne Cotes (d. 1725). Rev Abson was the rector of St Nicholas Church, but when that church was destroyed in the Civil War the congregation was welcomed into St Peter's to worship. Nearby is a plaque to another rector of St Peter's, Rev Edward Chappell, who served from 1725 until his death in 1767.

One peculiar feature is the large number of brass plaques set into the church floor. There are at least 32 of these plaques, many of them in the north aisle.

At the west end of the north aisle is a striking modern stained glass window dedicated to all those who have died from workplace accidents or work-related illness. It is thought to be the only window in Britain dedicated specifically in memory of workers. It was designed by artists Julian Cole and Keith Barley and installed in 2007. 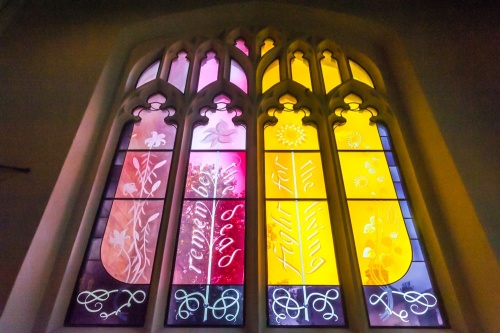 Another window is dedicated to Timothy Fenton, rector from 1704-1721. Fenton is best-remembered for founding the Nottingham Blewcoat School in 1706. Under the window is a copy of the original 18th-century set of rules drawn up to regulate the school. The rules are 'To be observed by the Trustees, Master, Mistress, and scholars of the charity school in Nottingham, together with some orders to be observed by the Parents of such scholars'.

The rules make fascinating reading. For example, Rule VI states that no children shall be admitted, 'but such as are healthy and strong, free from any contagious distemper as the Evil, Itch, Scald-heads, Falling-sickness, and the like, and to prevent being imposed on, the Trustees shall carefully view and examine each Child before his or her Admission.' 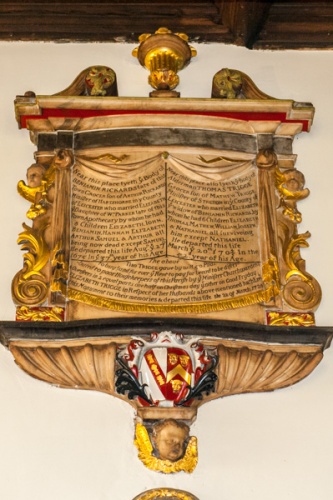 The ceiling of the west porch is painted with 'Agony in the Garden', a depiction of Jesus praying in the Garden of Gesthemane. The painting is by Thomas Barber (1771-1843) and was executed in 1816. Barber is also responsible for the portrait of Rev Robert White in the north aisle. The painting overlies a painting of the Last Supper, created in 1715 by Edward Dovey.

Dovey's painting is still intact but is covered by the later painting. Dovey's painting was controversial at the time; it showed the traditional Last Supper scene, with figures of Moses and Aaron flanking the central characters and a portrait of Queen Anne above. This portrait of the queen provoked an angry response from those who considered it 'image worship' and the queen was painted over with the figure of a dove.

St Peter's is a delightful historic building in the heart of Nottingham. It is usually open to visitors and was open when we visited. 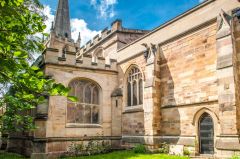 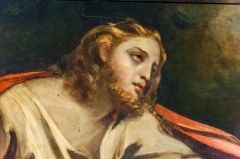 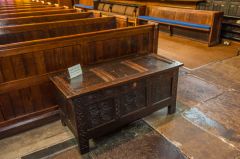 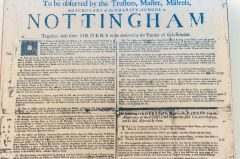