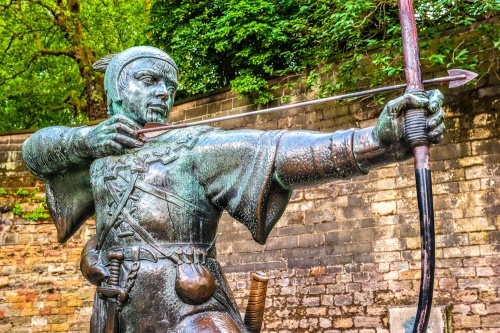 Nottingham is a historic city at the confluence of three rivers. The earliest settlers lived in caves hollowed out of the sandstone cliffs, and later inhabitants extended the cave system underground, creating an astonishing system of caves and tunnels that underlies most of the modern city. There are more than 500 caves under Nottingham and more are being discovered on a regular basis.

The city name comes from the Anglo-Saxon term 'Snotengaham', or home of the wise man's people. The settlement grew and flourished as part of the Danelaw, a vast swath of eastern England controlled by Danish Vikings. When William the Conqueror seized the English throne in 1066 he had a fortification built outside the settlement on what is now Castle Rock.

A new settlement grew up at the foot of Castle Rock, between the Norman castle and the original Danish settlement. This new settlement was known as French Borough. Over time the new and old settlements grew and merged together to form Nottingham as we know it today. Many of the street names end in 'gate', which does not mean a gate, but comes from the Danish word for a street. 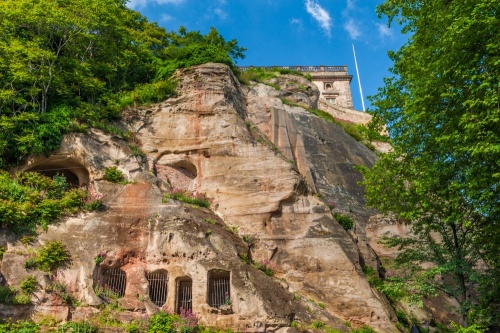 During the 18th century, Nottingham developed as a centre for making stockings. Workers had knitting frames in their houses and made stocking hose which they sold to hosiery merchants. The introduction of mechanised knitting frames spelt the death of this cottage industry, as did a change of fashion from stocking hose to trousers.

Many former hosiery weavers turned to making lace, and before long Nottingham lace developed a reputation for quality. The market for local lace grew, with trade centre around the Lace Market.

Over time mechanised lacemaking took over from cottage industry and many manufacturers built factories on the outskirts of Nottingham. Lace from the factories was sent to 'top shops' in the Lace Market where women and girls working above shops finished the lace and made it ready for sale on the ground floor shop below. Nottingham lace was primarily machine-made, much of it used to make lace curtains. 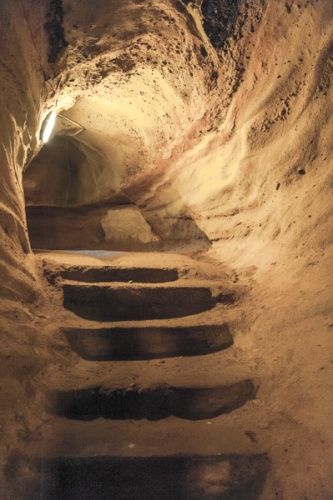 The boom time for Nottingham lace and the Lace Market was the mid-Victorian period, with large showrooms and warehouses drawing buyers from around the world. Demand for lace declined in the 20th century and by 1950 the once-busy Lace Market had fallen on hard times and was faced with demolition before it was restored and renovated as a mix of popular accommodation, restaurants, clubs and shops. Today the historic Lace Market is one of Nottingham's most popular areas.

High on a rocky outcrop riddled with caves and tunnels stands Nottingham Castle. The castle was begun by William the Conqueror in 1068 and rebuilt in stone by Henry II. King John seized the castle in 1194 during his brother Richard the Lionheart's absence on the Third Crusade. Richard returned in time to besiege the castle. When the garrison surrendered he had them all killed.

More drama ensued in 1330 when the young Edward II crept through the caves at night to capture his enemy Roger Mortimer while he slept. The castle was Richard II's favourite reside, and it was from it that marched out to do battle at Bosworth in 1485, where he lost both his kingdom and his life.

The medieval castle was later replaced by an opulent 17th-century palace built for the Duke of Newcastle. The palace was burned by rioters in 1831 and eventually converted into a museum and art gallery for the city council. 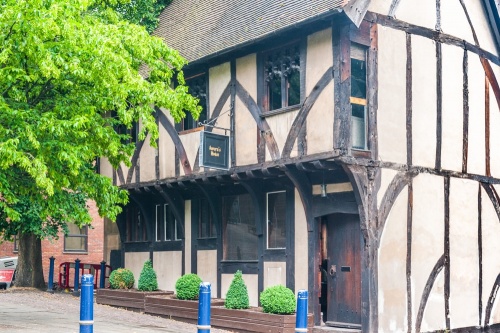 At the foot of Castle Rock is Brewhouse Yard, which, as the name suggests, was once the site of a brewing industry. A terrace of 17th-century cottages in Brewhouse Yard has been restored and now house the Museum of Nottingham Life, tracing the heritage of the Nottingham area. Behind the museum are caves converted for use as an air raid shelter during WWII.

Just outside the castle gatehouse and occupying the former outer bailey moat is perhaps the single most iconic site in Nottingham - a larger-than-life statue of Robin Hood, his bow bent and an arrow ready to fire. The statue was erected in 1952 and was a gift to the city of local businessman Philip Clay, who wanted to create a focal point for visitors drawn to Nottingham by its links to the legendary outlaw. The statue weighs over half a ton and stands seven feet tall. It is cast from eight separate pieces of bronze. 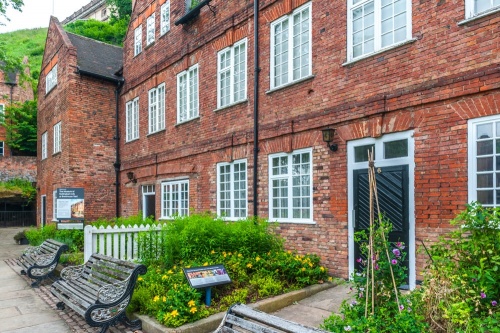 On High Pavement stands the former Shire Hall, where justice was dispensed since at least the 14th century until 1985. The Hall and the neighbouring Edwardian police station have been preserved as the National Justice Museum, the largest museum in the UK dedicated to crime, punishment, law and justice. Highlights include Oscar Wilde's cell door, evidence gathered during the investigation into the Great Train Robbery, and the prisoner's dock from Bow Street Magistrate's Court in London.

In the yard behind the museum is the last working gallows in Britain, brought here from Wandsworth prison. See the beautifully restored Georgian courtroom and here reenactments of actual court cases that were heard here. 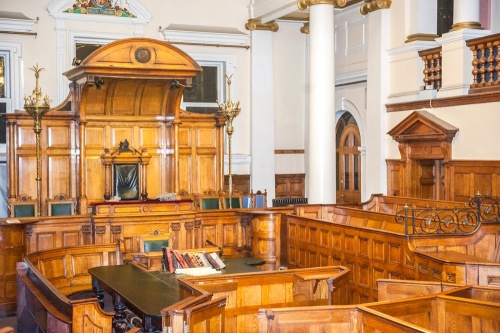 Near the National Justice Museum is St Mary's Church, one of three surviving medieval churches in Nottingham. St Mary's was founded in the 7th century, though the church we see today is primarily a product of the 14th century. Highlights include a richly carved porch thought to have been brought from the Priory of Lenton, and a tomb assembled from pieces of three medieval memorials.

Then there is the Lace Bride window, depicting a marriage ceremony of a woman wearing a wedding dress made of Nottingham lace. This is Katherine Wade-Dalton, who died a week after her wedding from the 1918 pandemic of Spanish influenza. According to legend, Robin Hood was captured by the sheriff of Nottingham while going to confession at St Mary's, but he was able to escape with the aid of Little John. 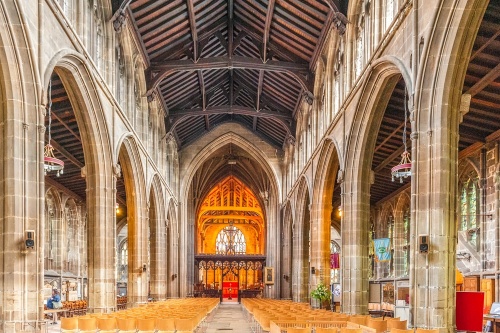 Another of Nottingham's medieval churches is St Peter's Church, built to serve French Borough, the community that grew up at the base of Nottingham Castle. In 1140 parishioners took shelter inside the church when Queen Maud's army attacked Nottingham Castle, which was being held by a garrison loyal to King Stephen. The army sacked the town and killed everyone gathered inside the church.

Historical highlights include a superb 1770 organ case, and memorials to the two wives of John Locke (died 1630 and 1637 respectively).

Look for the stained glass window dedicated to Timothy Fenton, a former rector who founded Nottingham's Blewcoat School in 1706. Much more modern is the Workers Memorial Window, dedicated to all those who have died from workplace accidents or illness. 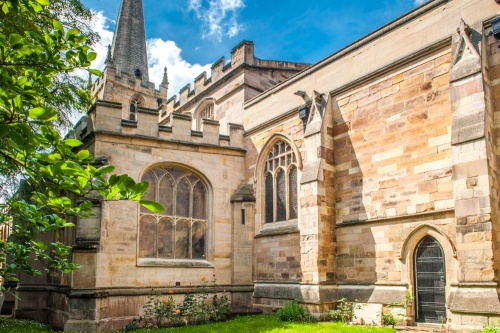 On Brewhouse Yard, at the foot of Castle Rock, stands one of Nottingham's oldest buildings and iconic landmarks, the Ye Olde Trip to Jerusalem pub. The inn sign proudly proclaims that it is the oldest inn in England and was established in the year 1189.

The inn's location beneath Nottingham Castle made it a popular stop for crusading knights. It is thought that Richard the Lionheart and his men gathered at the castle before embarking on the Third Crusade in 1189 and it seems likely that some of them would have stopped at the inn before their journey to the Holy Land.

The inn is as much a museum of Nottingham history as it is a pub. The interior is filled with historical objects and curiosities covering 800 years of local heritage. Beneath the inn are cellars leading to the ancient cave system that permeates the surrounding area.

Part of the cellar was once used as a cockfighting pit, and another part may have been used as an extension of the castle gaol. Visitors can see the Condemned Cell, a small, cramped gaol cell. Outside the cell, a 'gaoler's chair' has been carved from the solid rock.

In the pub's top bar is a glass case holding The Cursed Galleon, a model ship with a frightening past. The ship was supposedly given by a sailor to the landlord, though quite why he gave the gift is a mystery. Legend has it that the last three people to clean the model ship died suddenly, so now it is kept safely away from curious fingers in a glass container. Another curiosity is The Pregnancy Chair, rumoured to make any woman who dares to sit on it become pregnant. Another feature is a speaking tube connecting the pub to the castle so that castle residents could order beer. 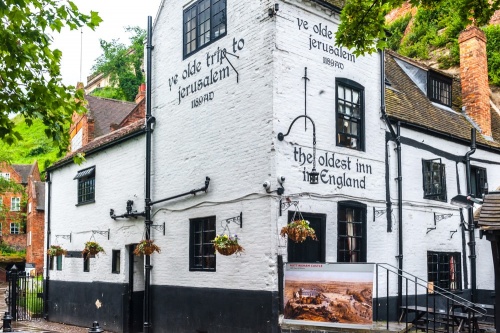 On Castle Road stands an attractive timber-framed building dating to around 1450. It was originally built as a merchant's house and stood on Middle Pavement. In 1968 it was under threat of destruction when Middle Pavement was widened. The entire building was taken apart and reassembled on Castle Road. It was used for a time as a lace museum but it is now used as offices.

On Castle Gate, a stone's throw from Nottingham Castle, is one of the city's oldest pubs, The Royal Children. The intriguing inn name comes from the late 17th century when, tradition says, the children of Princess Anne, the daughter of King James II, stayed for a time at the castle and played with the innkeeper's children. The sign outside the inn explains the story thus:

'This inn is probably one of the oldest licenses in Nottingham and derives its name from the period 1688 in the reign of James II when the King's daughter Princess Anne and her children were in residence at the castle. Tradition states that the Royal Children were entertained by the Innkeeper and made playmates of his children, hence the peculiar name given to the Inn in commemoration'.

Unfortunately, the story doesn't stand up to scrutiny. Princess Anne did indeed stay at Nottingham Castle in 1688 during the last days of her father's reign. However, at that point, she had no children. Her only child, Prince William, Duke of Gloucester, was not born until eight months after the Princess's visit to Nottingham.

The inn has another claim to fame. The original inn sign, now kept behind the bar, was made from the shoulder bone of a whale. According to the information panel outside the inn,

'This originated in a period shortly after James II when whale oil was introduced to take the place of candles, and this Inn is stated to have been one of the first to use oil lamps. The Innkeeper retailed oil to the inhabitants of the district and the home of the Inn, Royal Children was painted on this whalebone coupling the business of oil vendor with Innkeeper, and the sign has been a feature of the house ever since'. 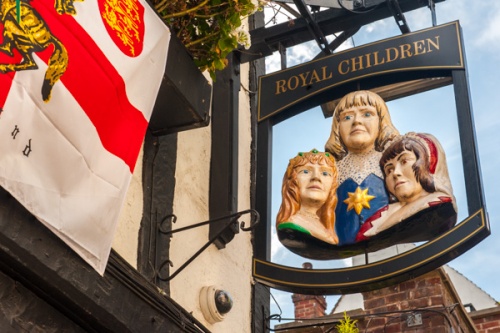 On the outskirts of Nottingham stands the sumptuous English Renaissance mansion of Wollaton Hall. The Hall was begun in 1580 by Sir Francis Willoughby and was designed by Robert Smythson, the same architect responsible for Hardwick Hall in Derbyshire.

The result is unlike anything else in England; a palatial Renaissance residence that looks from the outside exactly as it would have done when finished in 1588. Wollaton Hall is now home to the Nottingham Natural History Museum, with over 750,000 items divided into themed areas like minerals, insects, and birds. There is a special exhibit on African wildlife.

Nottingham is well served by a park and ride system. There are nine Park and Ride locations around the city with over 6500 parking spaces. This is by far the easiest way to visit the city as a tourist.

More self catering near Nottingham

More bed and breakfasts near Nottingham