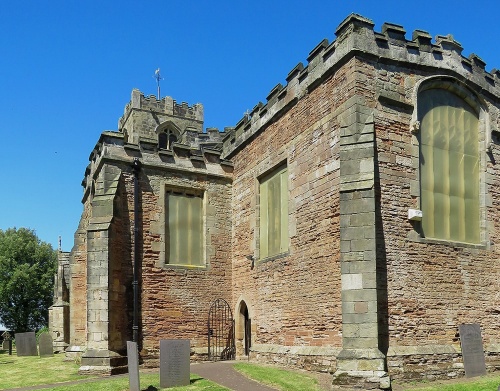 Strelley is an isolated little village immediately west of the urban sprawl of Nottingham, between the modern housing estates of Broxtowe and the M1. One of the local landmarks easily visible to motorists on the M1 is the tower of All Saints Church, a Grade I listed building that must be considered among the best medieval parish churches in England.

Though the village must have existed by the time of the Domesday Book, the earliest written record of a church comes from the 13th century when John de Escuris was mentioned as the priest. The earliest part of the present building is the base of the tower, which may date to the late 12th century. 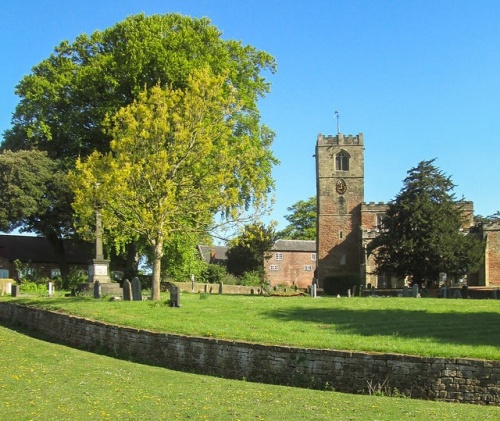 The churchyard and ha-ha

In the early 13th century the lord of the manor was a Norman baron named Walter, who adopted the surname de Stradleigh. Walter was followed by twelve direct descendants, each a knight. One of these descendants was Sir Sampson de Strelley, who rebuilt the earlier church around 1356, possibly in gratitude for surviving the Black Death of 1348.

The Strelley family were lords of Strelley estate until 1678 when their waning fortune forced them to sell the estate to the Edge family. The Edges held the estate until 1978 when the direct line of heirs died out. During that 300 years, several members of the Edge family acted as rectors of the combined parish of Bilborough and Strelley. So for over 700 years just two families owned the village and held the patronage of All Saints Church.

In the late 18th century Thomas Edge tore down the houses surrounding his home of Strelley Hall and the church and rebuilt them half a mile away so that he could create wide, sweeping views across open parkland for his house.

Throughout much of this period, the families treated All Saints like their private chapel. Memorials to generations of both the Strelleys and the Edges make All Saints a delight to visit. 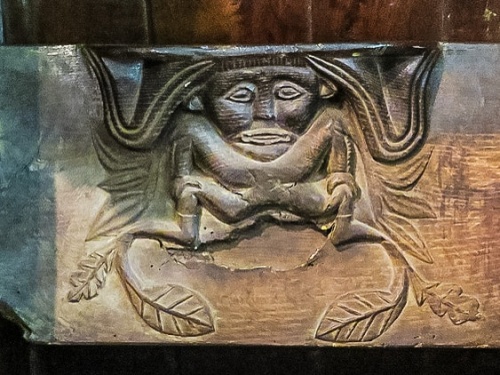 The most impressive historical feature in All Saints Church is the late medieval chancel screen, erected around 1490. The screen is carved from oak supported on a stone plinth and features a beautifully traceried canopy. The screen is in superb condition, perhaps due to being boarded up following the Reformation. The side screens behind the choir stalls are Victorian, in the same style as the medieval screen.

The pulpit is carved in a similar style to the chancel screen and probably dates to the same period (i.e. around 1490). Above the pulpit rises a Jacobean sounding board with a carved back panel installed in the middle of the 17th century. The Strelley pulpit is one of just two Pre-Reformation pulpits in Nottinghamshire (the other is at Wysall).

Another Jacobean feature is a Jacobean Bishop's chair in the chancel. The choir stalls that face each other across the chancel are Victorian, but behind them are three 15th-century stalls. Two seats in the north stalls are decorated on the underside with misericord carvings. One misericord is carved with the likeness of a bishop with a mitre. 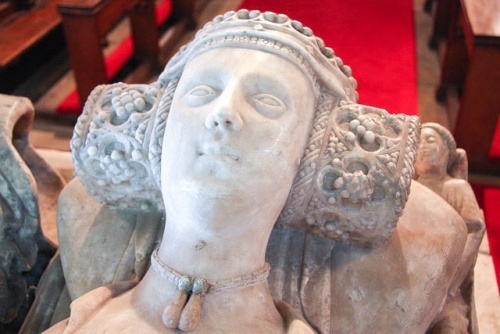 The other is carved with a fascinating fertility figure. Historians seem unsure of exactly what this carving represents. It may be a sheela-na-gig (a female figure displaying her genitals), a Green Man (or woman), or simply a grotesque figure. The style of carving certainly looks like a sheela-na-gig to me, and it seems as if a Puritan iconoclast must have thought the same thing, as the genital area has been defaced.

The font is a century earlier, installed in the 14th century. It has a plain hexagonal bowl set on an unusual traceried base. The base itself stands on a large step decorated with quatrefoil carvings.

The chancel acts as a mausoleum for the Strelley family, while the south transept acts as the Edge family chapel.

In the chancel are a pair of beautifully carved medieval altar tombs topped with effigies. The first is Sir Sampson de Strelley (d1390) and his wife Elizabeth Strelley, nee Hercy (d1405). This is considered one of the finest medieval alabaster tombs in England. The couple's effigies are shown lying side by side and, unusually, holding hands.

Nearby is the tomb of Sir John de Strelley (d1501) and his wife Sanchia, nee Willoughby (d 1500). The couple is shown side by side, but this time in a more typical pose, with their hands clasped on their chests in prayer. 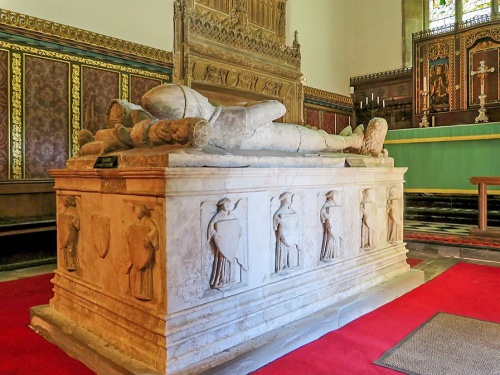 On the chancel wall are memorial brasses to further generations of Strelleys. The oldest is that of Sir Robert Strelley (d 1458) and his wife, Isabel, nee Kemp (d 1487) and their eighteen children.

There are also several medieval grave slabs including that of John de Strelley (d 1421) and a very worn slab to an unknown member of the Strelley family dated 1438.

In the south transept are tablets and grave slabs to members of the Edge family. The oldest is that of Ralph Edge (d 1684) who bought the Strelley estates from the Strelley family. 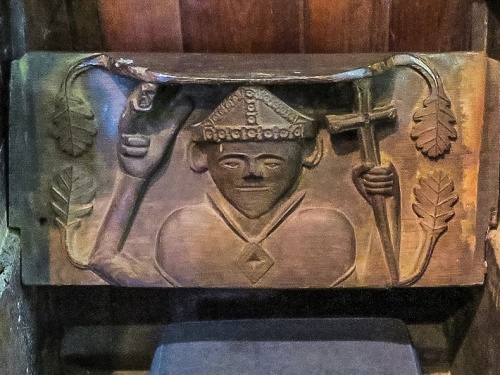 Medieval misericord of a mitred bishop

All Saints Church is on Main Street in Strelley village. Take J26 off the M1, or the B690 from the centre of Nottingham. The church has regular open days throughout the year and can arrange special opening times for individuals or groups at other times by previous arrangement. Please see contact details and scheduled open days on the official church website.

The photo of Lady Elizabeth de Strelley's effigy is (c) Richard Croft. All other photos are (c) John Sutton. All photos republished with gratitude under a Creative Commons license.

More self catering near Strelley, All Saints Church

More bed and breakfasts near Strelley, All Saints Church