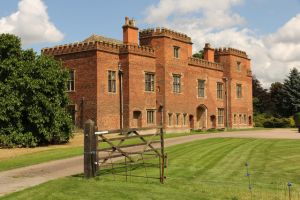 Holme Pierrepont Hall
Whatever your architectural tastes, you'll find something to enjoy at Holme Pierrepont Hall. Look for the 15th century timber roof, and a superb Tudor entrance with three storey towers. The interiors are largely 17th and 18th century, and the north wing is a Victorian restoration. A long gallery overlooks the garden in the former courtyard.

The Hall was built of attractive red brick by Sir William Pierrepont, but there was a house here at least 200 years earlier. Sir William's hall was complete by 1500, but there was enough of the house complete that he was able to welcome Henry VII as a guest in 1487.

The ground floor is pure Tudor, with two halls divided by a central staircase. Each hall retains its original fireplace and a separate garderobe. Behind the central block is a courtyard, enclosed on only three sides, with a knot garden in the centre.

On the east of this cloistral arrangement is the Long Gallery, a jumble of Tudor and medieval architecture. Rising from the centre of the gallery is a superb 17th-century staircase.

The Pierrepont family came to England with William the Conqueror, and eventually rose to become Dukes of Kingston in 1715. By the 18th century the family seat had shifted to larger, more impressive habitation at Thoresby Hall. Holme was not neglected, however, and it was just as well that it was not, for the income came in very handy for one member of the family. 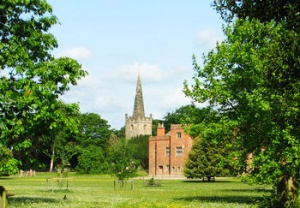 In the late 1760s Evelyn Pierrepont, second Duke of Kingston, took Elizabeth Chudleigh as his mistress. Elizabeth was secretly married to Augustus Hervey, but had kept the marriage quiet so she could remain a Maid of Honour to the Princess of Wales.

Hervey publically demanded a divorce, and Elizabeth countered, claiming they had never been legally married. She got a court order to that effect, and married Duke Evelyn.

Ah, but when Evelyn died and left Elizabeth all his property, the Pierrepont family allied in protest. The Duke's nephew Evelyn Meadows, had Elizabeth charged with bigamy. She was tried before the House of Lords in 1776 and found guilty.

Elizabeth claimed immunity as a peeress, then fled to the Continent. For the next dozen years she travelled Europe, sustained by an income of 4000 pounds per year from the Holme Pierrepont estates.

The Hall briefly became the family seat again when Thorseby was rebuilt, but for the rest of its history was secondary to the larger house. Perhaps for that reason it was little altered over the centuries, retaining much of its Tudor character.

In the 19th century some fashionable Gothic touches were added, but for the most part what we see today is 16th and 17th century work. Immediately beside the Hall is the attractive church of St Edmund, dating to the 13th century but totally rebuilt in 1666 by the Marquis of Dorchester.

Holme Pierrepont Hall is primarily a wedding venue today, but it does have regular open days, so it is well worth checking the official website for upcoming opportunities to visit.